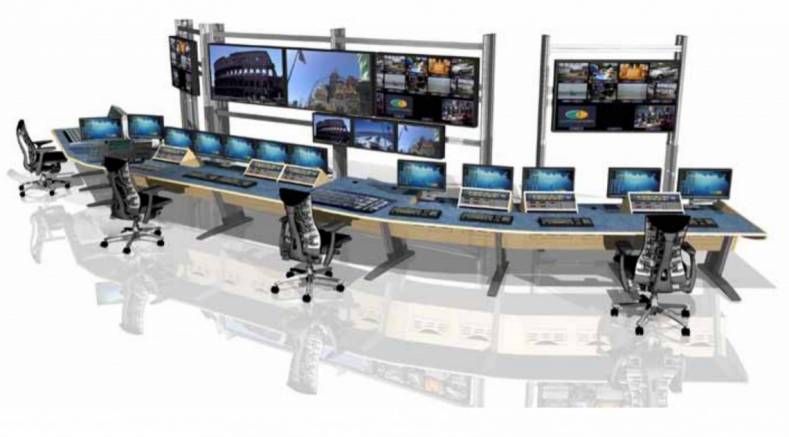 The two Media Walls were shipped in compact form as vertical columns and 2.66-meter wide horizontal beams. They were assembled on site and equipped with monitor panels to display camera, VTR and auxiliary sources plus two larger screens assigned to preview and program. Each Media Wall is positioned directly in front of a video production desk within easy view of the operators.

Both video production desks are designed for simultaneous use by a camera input controller seated at left, graphics assistant (center) and vision mixer (right). Each desk is structured as a three-bay in-line 4.66 meters unit. Four camera control panels are set into the left-hand bay plus a Sony video production switcher in the center bay. Two desktop-level equipment bays with space for a total of eight single-rack unit equipment chassis are mounted along the rear left bay. Two additional 4 + 4U pods are positioned at the rear of the central bay. The video production desks are designed for simultaneous use by a camera input controller seated at left, graphics assistant (center) and vision mixer (right).]

Each of the two video edit desks is configured for use by up to two operators. The desks are of rectangular design, 2.6 meters wide, with two 3U high desktop equipment pods. An additional Sony video production switcher panel and a central Sony video editing controller are located at right. Two TV Logic video monitor panels are located on the equipment pods. An additional monitor is mounted on the left-hand bay, suspended from an Ergotron height-adjustable and angle-adjustable arm.

All six desks measure 1.2 meters front to back and are finished in beech veneer with rugged grey Marmoleum desktop work surfaces.