One of the reasons there are so many types and models of microphones is they are like artist’s paint brushes — each mic colors the sound in a unique way. No wonder voice-over talent, announcers and on-air news talent prefer a microphone that’s makes their own voice sound its best. 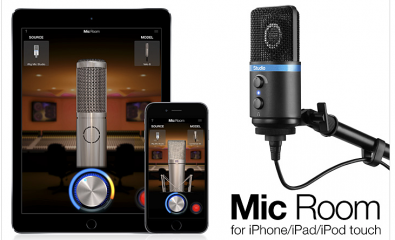 IK Multimedia, who has been on a roll lately with new portable products designed for iPhones and iPads, has introduced a new combo that brings professional microphone modeling to these portable devices. It allows a tiny travel package to emulate the greatest microphones ever built.

The first part of this package is the new IK Multimedia iRig Mic Studio, an ultra-portable pro-quality large-diaphragm microphone for all platforms, including iPhones, iPads, Android and Mac and PC laptop computers.

It has a one-inch diameter capsule, a 24-bit audiophile-grade A/D converter (with 44.1/48 kHz sample rate) and a built-in low-noise high definition preamp that can record studio quality audio anywhere.

The iRig Mic Studio coincides with the new Mic Room microphone-modeling app for iPhone, iPad and iTouch. This new app provides a collection of modeled microphones that voice talent can use to color the sound of their iRig Mic Studio.

With mics including popular ribbons, condensers and dynamics, the collection includes virtual versions of many of the most timeless microphone designs of all time. 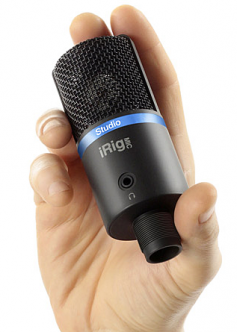 The iRig Mic Studio, combined with its 133dB SPL rating, allows for optimal audio capture at virtually any sound pressure level. It can record everything from the subtle and nuanced dynamics of the human voice to the full-on cabinet of an amplified electric guitar. The components fit into a compact enclosure so small it makes travel very easy.

This microphone also has a comprehensive set of monitoring and level control features including a gain control knob and a multicolor LED level indicator that allows for simple adjustment. It also has a headphone output jack with its own level control for monitoring directly from the microphone itself. It comes with a portable tabletop tripod stand and a protective travel pouch.

The kit  also has a female micro-USB port on the bottom and an assortment of cables: Micro-USB to Lightning for iPhone, iPad and iPod touch; micro-USB to micro-USB OTG for Android (requires either an Android 5 or Samsung Professional Audio device); and micro-USB to USB for Mac and PC. 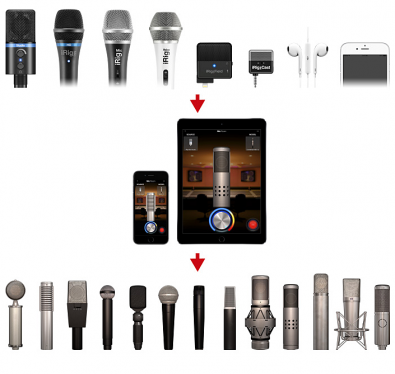 iRig Mic Studio provides both real and 'virtual' microphones via the iOS ap.

The Mic Room app for iPhone, iPad and iPod touch works with IK Multimedia’s range of microphones to alter their sound. The basic Mic Room comes with eight virtual mic models that cover the complete spectrum of sounds from the classic to the contemporary. This initial library can be expanded via in-app purchase for extra microphone models that can be bought a-la-carte or as a bundle.

The user plugs in the microphone via the Lightning port into the iOS device and then selects the virtual mic model they’d like to use. Mic Room will automatically detect the input microphone. Each microphone model can be tweaked via an intuitive graphic interface that provides a level meter and a touch-and-drag gain knob.

Mic Room is also Audiobus and Inter-App Audio compatible, so it can be used with other audio recording and editing apps. With with top of the line iRig Mic Studio, the app best offers the sonic characteristics of dynamics, tube condensers, ribbons and other classic microphones.

Also, available for the Mac and PC is IK Multimedia’s T-RackS Mic Room, a similar application with over 20 classic microphones that work the same way. This applications has more features and is better for professionals traveling with a more powerful Mac or PC laptop.