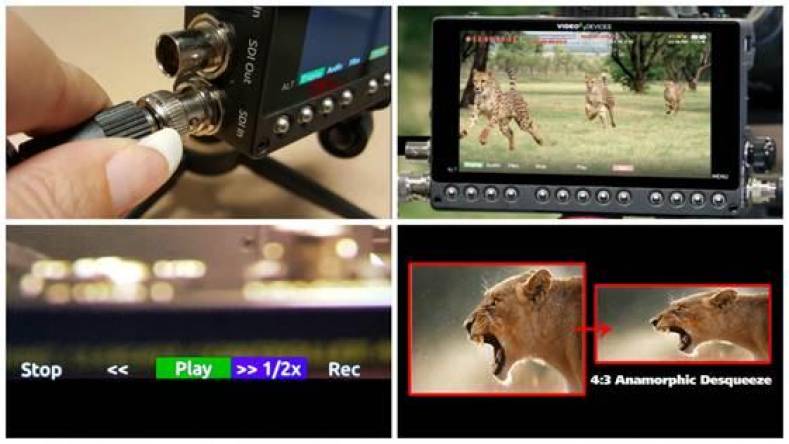 On both PIX-E models, this version of firmware also features a 3:2 pulldown removal option

“We pay close attention to feedback from our customers, and we’ve used these suggestions to add several key features, such as with our latest firmware 1.10 update,” said Paul Isaacs, Director of Product Management and Design, Sound Devices. “We’re committed to offering new firmware with enhanced features to better assist our customers on the job.”

With firmware v1.10, the PIX-E Series now supports the higher frame rate of 1080p 120fps for HD recording, which can be used for capturing slow motion footage. The update also enables a 4:3 anamorphic desqueeze feature to the LCD and SDI/HDMI outputs during both monitoring input and playback. This process stretches out the horizontally squeezed images that result from cameras using anamorphic lenses, such as the Panasonic LUMIX GH4.

The firmware also includes 16x fast forward and 16x rewind functionality, the ability to jog through playback frame-by-frame, and shuttle in slow or fast motion. The new shuttling capability provides navigation of playback forward or backward at rates from 1/8 speed to 32 times speed. Audio monitoring is retained while shuttling forward from 1/8x to 2x. This update also has the ability to select next or previous recorded files from Stop by pressing Rewind or Fast Forward soft key buttons.

For the PIX-E5 monitor, v.1.10 now offers users 6G-SDI support of recording 4K over a single SDI cable for cameras like the Blackmagic URSA, plus the ability to enable or disable a LUT on an SDI output.

On both PIX-E models, this version of firmware also features a 3:2 pulldown removal option for input to file conversion, as well as more options for using external timecode. When set to 3:2 Pulldown, PIX-E Series monitors will automatically apply 3:2 pulldown if it detects a 3:2 cadence in an incoming 1080i 59.94 signal. External timecode options now include Linear Timecode via the 3.5 mm line inputs, and HDMI timecode.

The PIX-E Series of 4K recording monitors includes two released five-inch models, PIX-E5 and PIX-E5H, as well as the upcoming seven-inch PIX-E7. Both the PIX-E5 and PIX-E7 monitors have SDI and HDMI I/O, while the PIX-E5H has HDMI I/O only.

The monitors are equipped with monitoring tools, plus the ability to record 4K and Apple ProRes edit-ready files to the mSATA-based SpeedDrive. Video Devices built the PIX-E recording monitors in die-cast metal housings with scratch-resistant GorillaGlass 2. In addition to durability, the high-resolution monitors are available as 1920x1080 (PIX-E5 and PIX-E5H) or 1920x1200 (PIX-E7) LCD displays, which are color accurate and sunlight viewable.