The “Truth in Backup” conference hosted by Truth in IT, Inc. provided an entertaining environment to learn the latest trends and technologies that can provide crucially important backup and recovery services for the largest IT systems.

We all know that backing up data is crucially important for anyone working in IT, but who would have expected that learning about the latest trends and technologies in data preservation and restoration can also be entertaining? 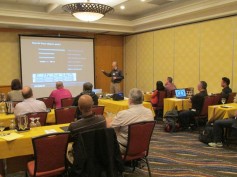 It was a pleasant surprise for participants of the “Truth in Backup” conference put on by Truth in IT, Inc. at the Doubletree Suites by Hilton in Santa Monica, CA, on December 3, 2015. Those who attended received the trade-off of being served breakfast and lunch in exchange for listening to several 15 minute pitches by major companies in the IT business specializing in back-up technologies, while also being treated to four topical discussions lead by moderator W. Curtis Preston on the daunting challenge of keeping data safe and getting it back when its lost. 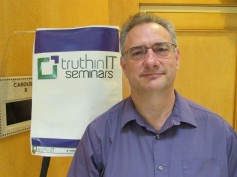 W. Curtis Preston, author of three books in the IT space and webmaster of BackupCentral.com

And unexpectedly, the presentations from the company representatives were short on product pitches, focusing instead on discussions of backup strategies and industry trends.

“People have to start thinking about methods of back-up that allows for instant data recovery, that allow you to spin up a virtual machine without having to do a restore,” said Preston. “That means you can run the broken system directly from the back-up.” 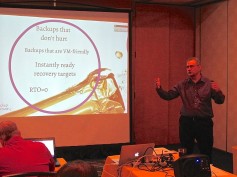 This contradicts the usual conception of a back-up as a duplicate volume of data that has to be re-loaded into a system once it has been repaired.

“For 50 years we have stored back-ups in a container, in a tape or on a TAR (Tape Archive Recovery) ball, and to use it you had to put it back some where,” Preston explained. “The thing that has changed is that we now can store back-ups in a way that lets me directly access them.”

The vendors presenting at the Truth in IT seminar would be presenting a more efficient way to approach this IT challenge.

As Preston explained, “Now we store the back-up in a way that we can directly access the VM-ware server and run the system from there while the original operating platform is being repaired. It involves far less down time.”

Preston presented his own talks on four topics during the day: “Identifying Bottlenecks”, “Champaign Recovery on a Beer Backup Budget”, “Cloud Adoption”, and “Where Tape is the New Disk”.

Each topic was spiced by audience feedback tallied on a voting keypad whose results appeared instantaneously as a bar graph on the speaker’s screen.

Interspersed during the day were 15 minute presentations by representatives of 7 of the major IT companies offering back-up technologies. 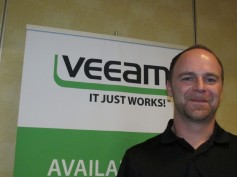 “My presentation will be ‘12 Things Not to Do with Back-ups’,” said Nicholas Serrecchia, Systems Engineer at Veeam,” and I’ll be discussing how to utilize modern technology to facilitate your back-ups. It’s more of an informative presentation, but I will also be mentioning Veeam’s Backup & Replication system.” 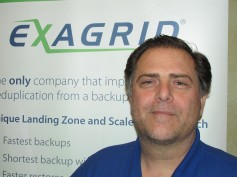 "I’ll be talking about our Exagrid disc-based backup appliance that does compression and deduplication," said Ron McClellan, Systems Engineer Manager at Exagrid, "that makes your back-ups faster with a more scalable architecture." 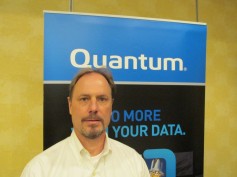 “We provided options for storing, archiving and protecting our customer’s data,” said David Titzer, Regional Sales Manager, Quantum, “emphasizing our StorNext platform that lets you tier your data and move it to different options.” 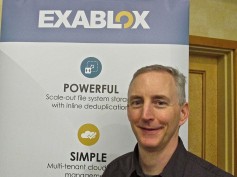 “I’ll be teaching people about the new and unique object based storage,” said Brian Atwood, Principal System Engineer at Exablox, “and how it relates to our network attached storage product called OneBlox” 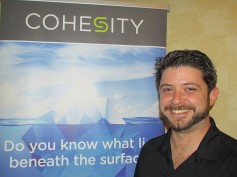 “The mission we have set out to tackle,” said Nick Howell, Technology Evangelist at Cohesity, “is to consolidate all of the efforts to concentrate smaller silos of a distributed data system and move it all into the cloud.” 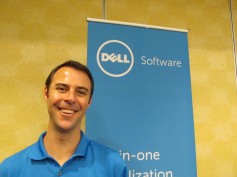 “The whole mantra behind Dell’s data protection business is to match your back-up to your individual needs,” said Joe Poehler, Data Protection Specialist at Dell. “Not everything is satisfied by a cookie-cutter approach, and enterprise data centers need tailored information recovery strategies.” 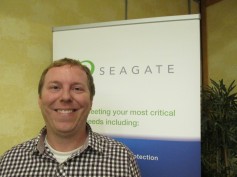 The mid-day break featured a buffet lunch and it was capped by the raffle of a DJI Phantom 3 Drone. Heck, Truth in IT, Inc. even paid for parking!

Who said backup can’t be fun?