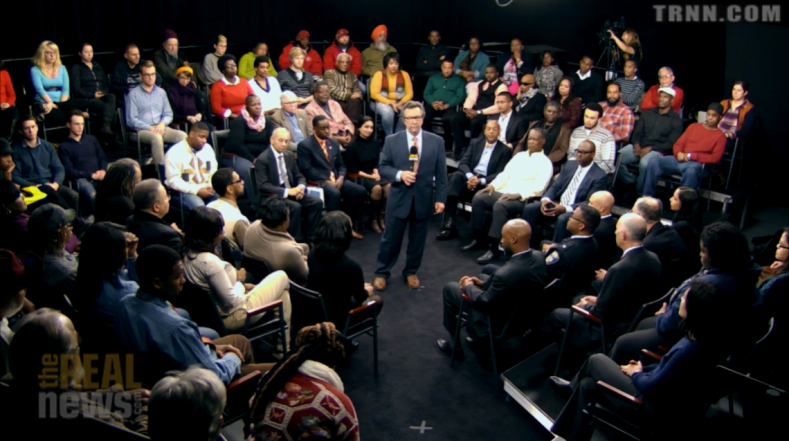 As a completely donor-funded news station that doesn’t accept any government or corporate advertising dollars, TRNN heavily depends on technology to achieve its mission. As the network grew to produce four to five shows per day, the team began using a basic version of Skype via computer, but technical issues like frozen screens, inconsistent resolutions, and limited bandwidth were a constant headache, so Chris DeMillo, Studio Manager at TRNN, decided it was time for an upgrade.

Because they already had the NewTek TriCaster 8000 and 450, they looked first at NewTek’s TalkShow VS-100, the video calling production system designed for television studios and live event producers using Skype. DeMillo’s boss was skeptical because of their previous issues with Skype, so they did several tests using Zoom, which is another direct video link conference call service, and other tests using 4G phone data on a cell phone, just to see if the machine could put out a decent broadcast using some of the lowest quality bandwidth. They were impressed enough with the demo to buy one to add to their studio.

Unlike their old workflow, using this system gave them the ability to autocorrect color and white balance and set a bandwidth threshold. “When it drops below 640p resolution, it can go to a pre-shot photo you’ve taken of your guest,” says DeMillo. “It’s nice to have that versus having a weird frozen face or going black.”

Incorporating New Additions Into the Workflow

DeMillo’s team uses Sony PMW300K1 for large-scale productions, Sony NEX-EA50 cameras in the field, and three small PTZ Sony EVI-H100S cameras in the studio in case people want to record themselves doing a podcast or radio show. It makes it possible to have just one person in the control room to record audio as well as operate a 3-camera shot.

In preparation for a show, a producer will call the guest to set up the date and time of the interview, and put it into the production schedule. 15-30 minutes before the interview, the interview guest is called to do a “tech check” to make sure their connection, lighting, and audio are good. If something isn’t right, there is time to adjust those things as much as possible before the show goes live.

DeMillo prefers to set the resolution at 640p, but occasionally has to lower it to 320p for guests who are international or don’t have a good connection to begin with. He aims to have the best resolution possible.

Sennheiser wireless G3 microphones are used in the studio, and Shure SM58 wired microphones are used for audience Q&A and in the field. Audio comes out from the TalkShow into a Mackie 1604 mixer, and Blackmagic Design converters/routers are used to communicate information between equipment. An Electro-Voice PA system is used for concerts held in the large studio.

Most interviews don’t require much work in post-production, as TRNN’s new equipment makes its workflow more streamlined by enabling preshow adjustments. Videos are easily posted on the TRNN website, YouTube, Roku, and the Comcast On Demand in the Baltimore region.

As soon as everything looks good and the sound isn’t jittery or broken up, the guest is transferred to the host who is in the green screen studio. The guest is patched through the earpiece and they begin the interview.