DJI has debuted Osmo, a combined camera and brushless motorized gimbal that enables the capture of smooth, shake-free video with minimal equipment.

DJI said Osmo is a compact stabilized 4K camera system that allows complex filming techniques such as motion panning with a one man crew and no specialist equipment such as trolleys or jibs are needed.

The Osmo is by no means the first motorized gimbal of this size as there are already accessories for action cameras that have been around for some time, but DJI said nothing comes close to the complete control that a fully integrated grip, gimbal, camera and smartphone app offer.

The eyeball-shaped camera fixed to the harness of a motorized gimbal is then connected to the control handle. The whole system is modular, so if you own a X5 or X5R gimbal camera already then those are also compatible and can be interchanged.

The control handle is well engineered, and although made of plastic it's nicely finished with an ergonomically shaped and textured grip. Around the top are a series of buttons and a jog wheel that enables operators to adjust the rotation and tilt of the camera.

DJI said not only does the Osmo enable the same smooth footage that one would expect from a stabilized rig such as a Steadicam, but because it's motorized it also features a series of impressive pre configured gimbal modes. Modes include follow mode, fixed, inverted and torchlight.

In the Osmo, DJI is using its own X3 camera, which already features on the Inspire 1, but here it has been adapted for ground level use, with a focus optimized between 1m and infinity. This change makes a huge difference to the image style and ultimately the quality of the footage and how it can be used. 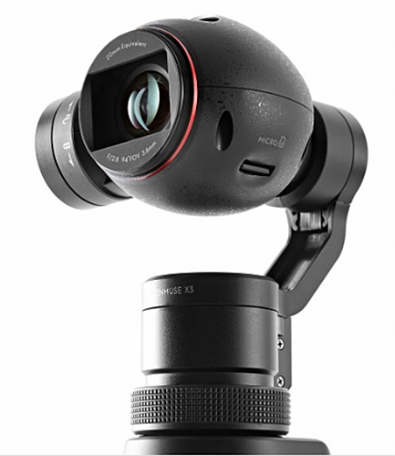 The small camera features 4K (24 or 25p) as well as HD (120 fps) ability, with a 94 degree field of view lens (20mm equivalent) and a 1/2.3-inch CMOS sensor – this is the same size you'd expect in a regular compact digital camera. The camera also takes 12 megapixel JPEG and RAW still images.

Clicking the mode button for the camera quickly shifts through the different smart filming functions including Panorama, Long exposure and Slow Motion. The slow motion ability is impressive with the capture of full 1080p footage at 120fps, enough to slow real time down one quarter speed.

DJI offers options for tripod mounting, extension rods, universal mounts, bike mounts and extension arms so that a smartphone can be fitted. The Osmo is also fully integrated with iOS and Android devices and the DJI GO app enables users to interact with the camera to adjust further settings adjustments as well as control over the operation of the camera and gimbal.

An integrated microphone allows onboard audio recording. With advanced controls like audio gain settings, users can be sure they are also capturing sound. A standard 3.5mm port is also available, so users can plug in an outboard microphone

The Osmo is priced at $649. Delivery is expected at the end of October.

The DJI Osmo kit includes the grip, gimbal, camera and device holder for your smartphone (there is a companion app).