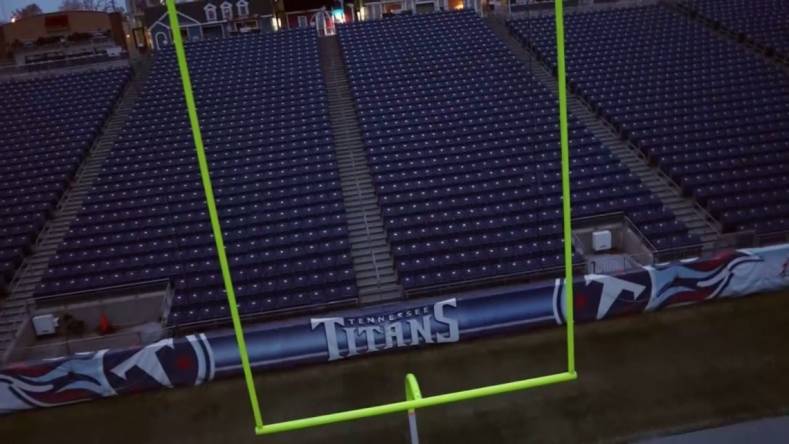 Amateur footage of Tennessee Titans Field goal post as seen from an RC Drone flying over the stadium.

After much deliberation this past year, The Federal Aviation Administration (FAA) has granted NFL Films, the league’s official archiving division, the right to fly unmanned aerial vehicles (UAVs) over areas where there are no public gatherings; but the wireless unique POV video recording systems are still prohibited on game day in stadiums and in parking lots.

The official waver is for projects used solely for: “aerial videography and closed-set motion picture and television filming.”

Following the ruling, it’s unclear how many teams will use the aerial video recording technology. According to the NFL, “teams may film their own practice provided they comply with all local, state and federal guidelines.”

The UAV flights were approved last week under a section of federal law that allows the Transportation Department to waive requirements for FAA approval for drone flights that are operated outside of restricted airspace and below 200 feet.

It’s anticipated that NFL Films and some teams (it’s not clear how many) will use drones for scenic shots for productions such as “NFL Films Presents” and “Together We Make Football” segments on NBC’s “Today Show.”

“NFL Films has a long history of embracing and employing the latest technology to tell its inimitable stories. NFL Films will use the unique visual images captured by drones to enhance their film making and story-telling,” said an NFL spokesman, saying the league would not comment further.

“The FAA has determined that good cause exists for not publishing a summary of the petition in the Federal Register, because the requested exemption would not set a precedent, and any delay in acting on this petition would be detrimental to the petitioner," the agency said in a letter to the NFL.

To date the FAA has approved more than 1,500 drone flights while struggling to ensure public safety following a rapid expansion of the use of the devices in the U.S. News stations have been clamoring to use the technology, hoping to gain a competitive advantage for viewers during breaking news stories. Their safety concerns are well founded. Among a number of incidents, a man bounced a DJI Phantom UAV off skyscrapers in Manhattan and crashed it next to a pedestrian, drawing a $2,200 fine from the agency. A drone even crashed the South Lawn of the White House earlier this spring, although no charges were brought against the amateur operator. In fact, only a handful of drone violations nationwide have resulted in fines, as the agency's guidelines are designed mainly for educational purposes.

Requiring the same waivers as the NFL has now received, news organizations have also begun to put the technology into action. In May if this year Chicago videographer Colin Hinkle was granted FAA approval to fly his drone commercially, which he began using to support local news channels as a freelancer.

At the time ABC affiliate WLS-TV hired Hinkle to shoot a new public works project in the area and the result was a stunning flyover view of the Bloomingdale Trail, a $90 million project to turn part of the old Bloomingdale Rail Line into a 2.5 mile long park. The station said it was “the first live broadcast from a drone in the history of local news.”

Cox’s ABC affiliate in Orlando, WFTV, has become the market’s first station to use a news drone for local news coverage. 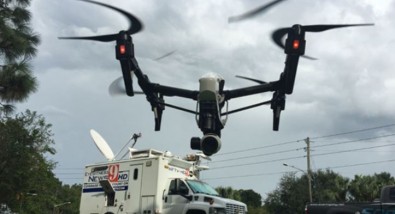 Drones now come in a variety of sizes and have been used for an array of applications. Shown here is the WFTV drone used for news coverage.

There are still a number of restrictions to drone news coverage in the U.S., Hinkle says, some of which are particularly prohibitive to covering breaking news. Users must give the FAA a 24-hour advance notice of where and when they’ll be shooting, and someone with a pilot’s license must accompany them. Let’s not forget that drones pose a potential threat to bystanders on the ground, and to nearby aircraft.

“You have to follow the rules laid out by the FAA,” Hinkle said in an email to WLS. “In the end the management at ABC 7 was quite happy.”

Hinkle used a small DJI drone attached to a Dejero live bonded cellular transmitter, which took a video feed out of his controller and then transmitted that wirelessly back to ABC via cell phone data connections.

Besides the NFL, the FAA has faced significant pressure to approve nonmilitary drone use from companies such as Amazon, which wants to use the technology to make faster home deliveries. Simultaneously, police and other law enforcement groups are also seeking approval to use the technology.

The section of law that allows the FAA to grant drone exemptions gives the Transportation Department the authority to drop a requirement that operators of the technology apply for a certificate of airworthiness that is normally required for flights that are formally considered an aircraft.

Going forward, expect more drone flights by news stations and other types of professional videographers—although several more mishaps will certainly follow as well—giving viewers uncanny views and a “big picture” perspective of never before seen footage from the ground.