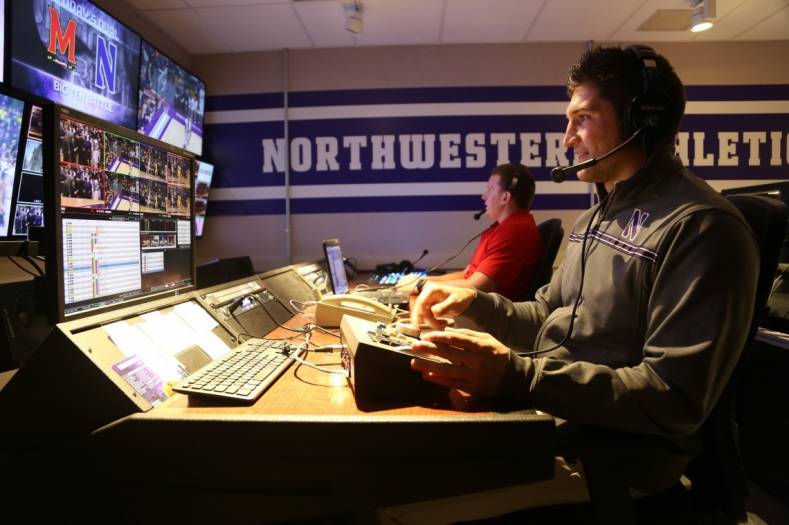 ZEPLAY is installed in the university’s new HD control room, which is networked to the video boards at Ryan Field and Welsh-Ryan Arena.

The Broadcast Operations department at the Northwestern University Department of Athletics and Recreation is using a ZEPLAY instant replay system from Tightrope Media Systems to capture and display all of the most compelling replays for fans.

The Broadcast Operations department is responsible for the creation of high-definition (HD) highlights and other important video messaging during game days, which are subsequently displayed on large video boards within two campus sports venues. The university had been using a mobile production truck with a competing replay system on board prior to purchasing ZEPLAY. The transition to ZEPLAY has both increased game day reliability and accelerated system training thanks to a quick learning curve.

“We use professionals for big games, but student operators trained on ZEPLAY are up and running in about an hour,” said Rob Coons, senior director of broadcast operations, Northwestern University Athletics. “ZEPLAY is also the most robust and reliable replay system we have used. We had performance issues with our previous system, which caused many headaches. We are confident we have what we need for highlights every game, as well as repurposed content to present on our website.”

ZEPLAY is installed in the university’s new HD control room, which is networked to the video boards at Ryan Field (football) and Welsh-Ryan Arena (basketball, volleyball and wrestling). When an event is happening at either venue, ZEPLAY instantly captures and sends signals to the appropriate location via a simple switching feature. With eight feeds to choose from (four in, four out), independent control of every output channel and a built-in multiviewer to monitor all angles, operators use ZEPLAY for all decisive video plays to engage fans, and to quickly add highlights to the department website.

“We can cut highlights for the big screen and store them within ZEPLAY for later use on the web, or during our coach’s show,” Coons said, adding that his department has been in discussions about acquiring a second ZEPLAY system. “We really put the ZEPLAY through its paces and are never disappointed. It’s really streamlined our entire workflow for the better.”