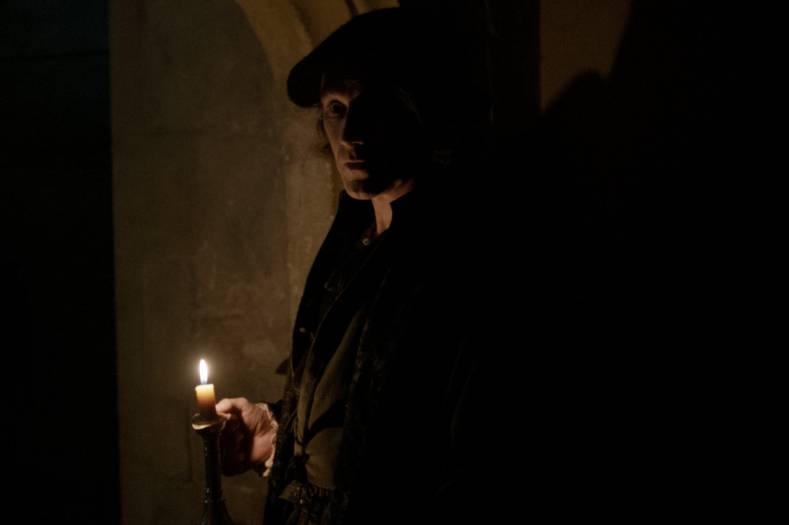 Historical dramas rely heavily on the buildings where the events portrayed took place to give authenticity to the production. Wolf Hall is among the highest profile television events of 2015, pulling in big audiences and glowing reviews for its depiction of the political and personal machinations at the court of Henry VIII as seen by his chief minister, Thomas Cromwell. Its use of actual locations, or contemporaneous ones, created the period feel, combined with natural and low-level lighting made possible by prudent choices of camera and lenses.

Wolf Hall, adapted by Peter Straughan from Hilary Mantel's novel of the same name and its sequel, Bring Up the Bodies, was shot at a variety of historic buildings in England and Wales, including Wells Cathedral, Montacute House in Somerset (standing in for Greenwich Palace), Caerphilly Castle, Penshurst Place and Lacock Abbey in Wiltshire, which acted as the exterior of Wolf Hall itself. Director Peter Kosminsky appeared at the recent Radio Times Festival, held fittingly at Hampton Court Palace, to discuss the series and where it was filmed.

The production was shot by leading cinematographer Gavin Finney, who says that although there were difficulties inherent in working at historical sites, it was a privilege to shoot at them. "We bent over backwards to make sure we didn't abuse the trust shown to us," he comments. "There were always curators or guardians for each building who were with us throughout. They had very strict rules about what we could do, how close we could be to furniture or tapestries. We were very careful and made custom frames to fit into each window so we could be very cotton glove with everything we did." 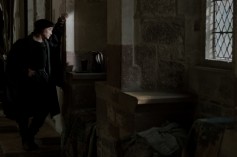 Mark Rylance as Thomas Cromwell at Esher Place, seat of his mentor Cardinal Wolsey. Lights were arranged outside the building to create consistent 'daylight' coming through the windows.

As might be imagined, the decision by Kosminsky and Finney to shoot interior night scenes using candlelight caused some consternation among the representatives of the National Trust and other organisations that now preserve historic premises. "Having naked flames was very tricky in negotiation," Finney acknowledges. "Obviously that made them very nervous. Of course there is a bit of a contradiction because for 450 years people had been lighting candles and fires in those buildings and they're still there. All of a sudden, with 21st century worry, and you can see their point, there was a long process of showing them the sort of candles we were using and that they wouldn't produce too much smoke. We had to have everything two metres from every wall and piece of furniture, candles couldn't be against the walls. It was a constant negotiation but the efforts were well worthwhile."

Finney explains that he suggested shooting using candles to Kosminsky early on in the production because he thought it would be good for the story. As enough time had been built into the schedule the director of photography "did a lot of testing" to ensure that it was possible to work without artificial light. "There were aesthetic and mechanical considerations," he says. "If you walk into a room with 180 candles, what's going to happen? With very bright points of light you can get double reflections, halos and smears. You can also get internal reflections off the camera sensor." 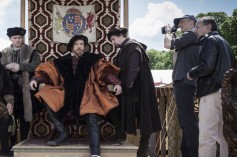 Tests were carried out on several digital cameras, including the then prototype version of the ARRI Amira, the RED Dragon, Sony F55 and the Canon 500 and 5D13. From these trials the ARRI Alexa was selected, together with Leica Summilux-C lenses, which were chosen after assessing Cooke S4s and 5s, Master Primes and Zeiss Ultra Primes. "The combination we liked best was the Alexa and the Summilux-C Primes," Finney comments. "The Leica set had an extra advantage in that they are much smaller in diameter than the Master Primes; they're T1.4 and are a kilo lighter. They had incredible contrast wide open and very little flare, no chromatic aberrations and very little bounce-back off the sensor. The Alexa just looked great straight out of the camera without any processing. It just worked and had a very painterly look to it."

Peter Kosminsky has said that the Alexa enabled Wolf Hall to be shot in candlelight. While some critics and viewers bemoaned the gloominess of the surroundings, others saw it as reflecting the dark times in which Cromwell, played by Mark Rylance, lived. So dark in fact that Finney and other members of the crew had to take special measures to cope: "We had to flag the moon off at night from our interior sets because the moonlight was too bright," Finney explains. "I was actually getting shadows in this hall where Cromwell was walking across the floor carrying a single candle. You couldn't see - I've never gone darker. We had helpers bringing the actors on set because if we were blacked out in daylight they just couldn't see until their eyes were accustomed to the light."

The care taken resulted in memorable scenes and an acclaimed drama, with no mishaps at the historical buildings providing the backdrop. As Gavin Finney says, "We wanted to be able to come back." Although, with Hilary Mantel still writing the third part of the trilogy, The Mirror and the Light, there's no telling when that might be.