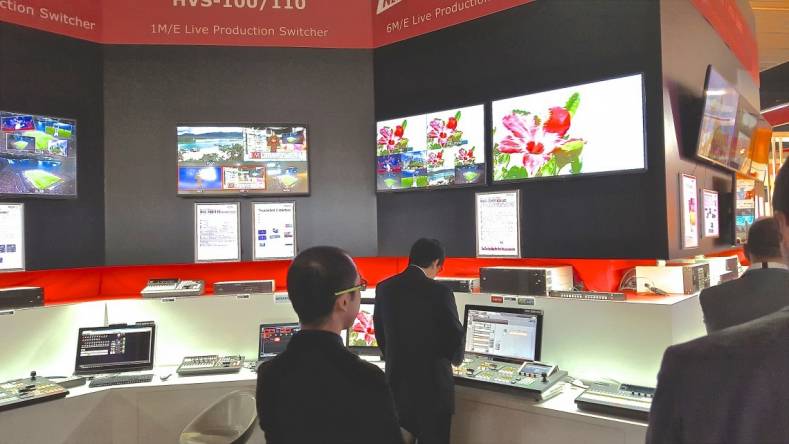 “FOR-A is in a constant development schedule for many products,” Jay Shinn, vice president of FOR-A America told The Broadcast Bridge during IBC 2015. “We know that fast time to market is key to our success and key to our customers as they can start realizing the benefits of FOR-A.

“Customers are asking for more affordable 4K solutions,” Shinn said, “and the FT-ONE-S provides a new balance of price to performance.”

Smaller and lighter than the company’s flagship FT-ONE, this new camera allows operators to separate the camera head from the body, letting you get shots from angles a larger camera could not attempt to go, and can capture them at up to 360 fps.

Videographers can shoot in the field with up to one km distance between the camera unit and base station since the camera links operators optically and via an intercom system.

Also for the first time at IBC, FOR-A displayed the HVS-2000 video switcher that now has a 3-row control panel.

“Many customers have asked for a 3ME panel for the HVS-2000 class of product,” Shinn said. “Having a virtual 6ME switcher makes a 3ME panel a natural fit for many customers.”

Rounding out their 4K offerings, FOR-A showed off their 4K compatible FRC-9000 frame rate converter which offers up, down and cross-conversion and multi-format support with advanced motion compensation processing.

“As 4K becomes more and more an adopted format, being able to achieve the best picture fidelity is key in the standards conversion process as well,” Shinn said. “4K adds an additional set of customer expectations that crystal clear images be delivered at every stage of the transmission process…the FRC-9000 delivers that expectation.”