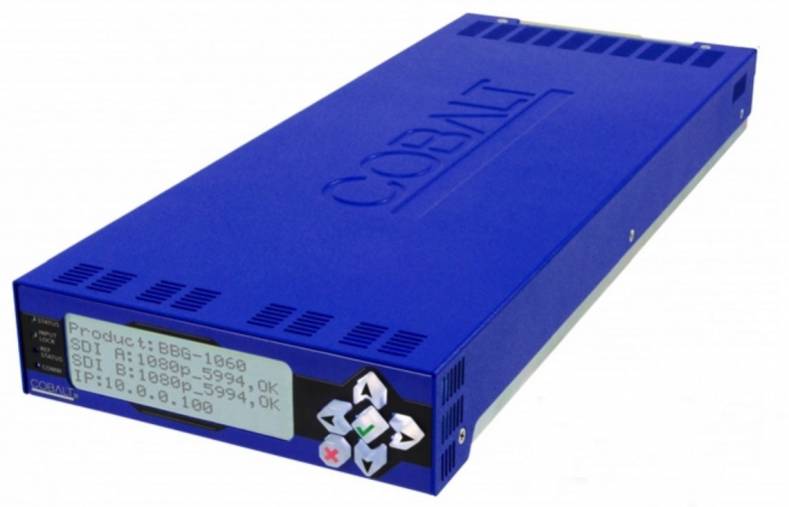 Cobalt Digital is shipping the BBG-1060-TG2-REF1 stand-alone, dual-channel test-signal generator, which is part of the company’s Blue Box Group family of products.

"We designed the BBG-1060 test generator with dual-channel testing capability so that customers get double the benefit from a single, compact box," said Jesse Foster, Cobalt Digital's product manager. "It's a feature that increases the unit's functionality and can reduce testing costs for broadcast facilities."

The BBG-1060-TG2-REF1 also provides AES and analog audio test tones, both using 24-bit data. It can use an external reference to provide an output that's synchronous with house reference, or it can use its internal reference timing to generate its own reference.

A CVBS output offers bi-level or tri-level reference output, and audio LTC test sequences are available over embedded, AES and analog audio as well as via an RS-485 serial port.

A built-in Web server allows users to control and monitor the BBG-1060-TG2-REF1 over computers or smart devices from anywhere with Web access, with no special apps or plug-ins required. (Remote control is also possible using DashBoard Connect).

The BBG-1060-TG2-REF1 uses only one-third of a rack unit, which allows three units to be installed in a 1-RU space. An optional mounting tray is available that ensures the units can be mounted securely to a standard 19-inch frame.

For high-density rack-mount applications, the TG2-REF1 system is also available as the 9960-TG2-REF1 openGear card, part of Cobalt Digital's wide range of cards for the openGear modular platform.