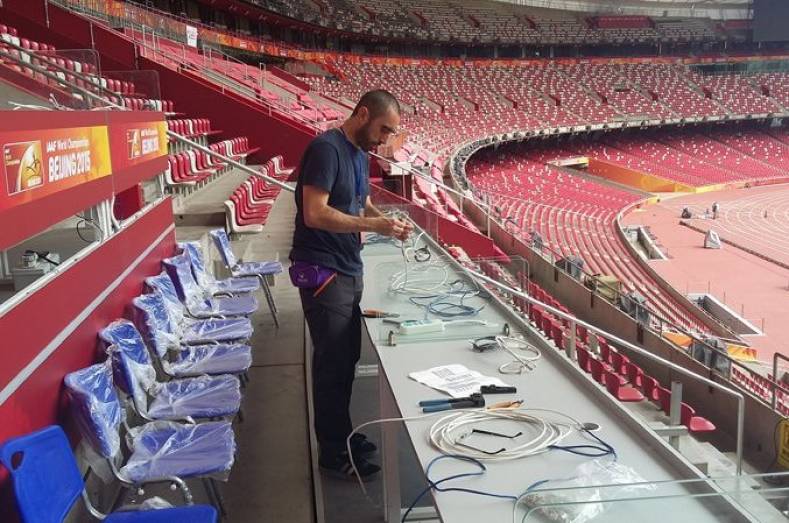 The recent IAAF Athletics World Championships (AWC) in China generated immense international attention, featuring as it did the showdowns between Usain Bolt and Justin Gatlin and Mo Farah winning both the 5,000m and 10,000m races at a major tournament for the third time. This interest was reflected in all the available commentary positions being booked, each equipped with digital systems provided by Spanish broadcast manufacturer AEQ.

Seven years ago feeds from the CCUs were still being carried over old fashioned telecom connections, including E1 audio multiplexes, which were also provided by AEQ. The AWC system featured up-to-date carrier technologies, such as audio over IP (AoIP). The fundamental set-up was similar to that for the Olympics, with unilateral feeds from the CCUs sent to the commentary switching centre (CSC) in the IBC using AEQ NetBOX 32 audio interfaces and network nodes. 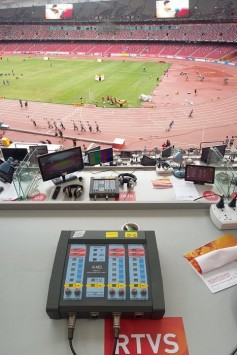 The CCR and CSC were linked using two redundant dark fibre connections. Once received at the CSC the commentary signals were then distributed to the various rights holding broadcasters (RHBs) in either analogue or digital, depending on the individual requirements. According to AEQ, they and the host broadcasters, CCTV, would have liked to have offered ports on a Gigabit network switch but this was not implemented because not many RHSs are currently using equipment that is compatible with Audinate's Dante Ethernet-based AoIP system or the AES67 IP interface protocol. A return path from the RHBs in the IBC was fed to the CCR through the CSC.

Commentary units were based on AEQ's DCS10 system, comprising a CCU rack able to run up to ten commentary units, each of which can accommodate three commentators and one summariser. The commentary feeds were controlled and monitored through computers fitted with Dante controllers and virtual sound cards in both the CCR and CSC. This set-up was able to both control the feeds and monitor the various signals from the commentator units, including Programme Go and Foldback, Co-ordination Go and Foldback, International Sound, Auxiliary and Guide. 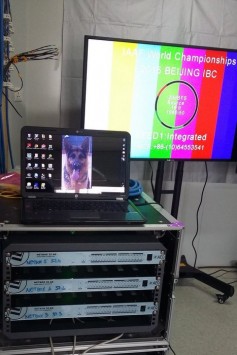 The international sound was split into two feeds: IS1 for television and IS2 serving radio. Both were produced in the broadcasters' compound and sent to the CCR over the same route as for RHBs. PA, two cue feeds and other common signals could be accessed over the Dante multi-channel IP network.

The CCR housed AEQ Phoenix Stratos IP and ISDN codecs, with NetBox 32 interfaces handling multi-channel AoIP connectivity to the IBC. All signals - both IP and ISDN - were carried over the main signal path to the Phoenix Stratos multi-format encoding units. This created both international distribution of commentary and bi-directional programme and communications feeds for RHBs in the IBC and at the commentator positions.