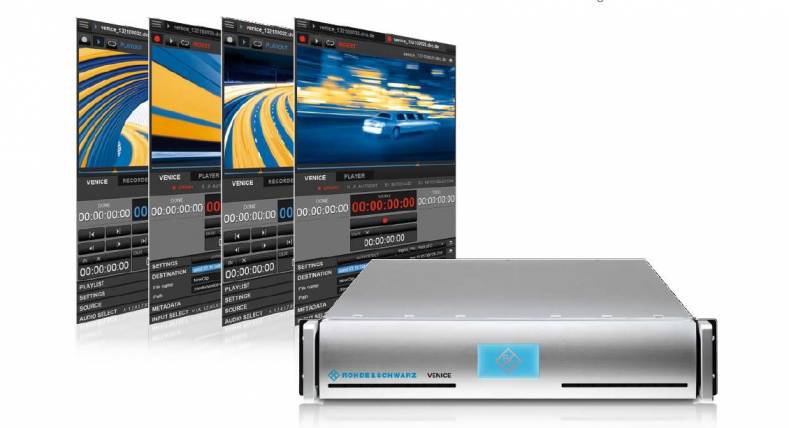 The Venice 4K server was introduced at NAB and will be upgraded at IBC.

At IBC, Rohde & Schwarz DVS will introduce new features for its ingest and production server R&S VENICE. These will enable TV studios to optimize their workflows from ingest to studio playout and content distribution.

Rohde & Schwarz DVS will introduce new several important new features for its ingest and production server R&S VENICE. These will enable TV studios to optimize their workflows from ingest to studio playout and content distribution.

As the ingest and production server offers parallel generation of both 4K and HD content, it facilitates production until content is broadcast entirely in 4K. Moreover, R&S VENICE 4K supports a large variety of codecs including XAVC. This way, TV studios experience greater production output as they can adjust their workflows flexibly to the given circumstances – while at the same time being fully prepared to meet future production requirements. By the end of 2015 R&S VENICE 4K will also be available in a 2U chassis.

The entire feature set of R&S VENICE is suited even better to studio production. The VENICE View software is based on streaming technologies and provides multi-viewer functionality, without the need for additional HD-SDI cabling, delivering a comprehensive overview of all ingest, playout and transcoding channels.

The R&S VENICE Play GUI further enhances ease of use especially for studio playout. It offers quick access to all key functions even in hectic production scenarios such as during live shows and news broadcasts. Thanks to its clear and simultaneous display of multiple channels, operators can keep a parallel overview of channels for primary playout in an A/B layout as well as auxiliary channels for secondary playout – they can also control them reliably even under frantic live situations. As the usable VENICE channels are recognized automatically within the network, configuration is made easy and straightforward even under ever-changing production conditions.

With its channel-grouping feature targeted at multi-camera production, R&S VENICE offers parallel recording as well as frame-accurate starting and playout of up to four camera streams per system. Moreover, several R&S VENICE ingest and production servers can be combined with each other to increase the number of channels as needed.