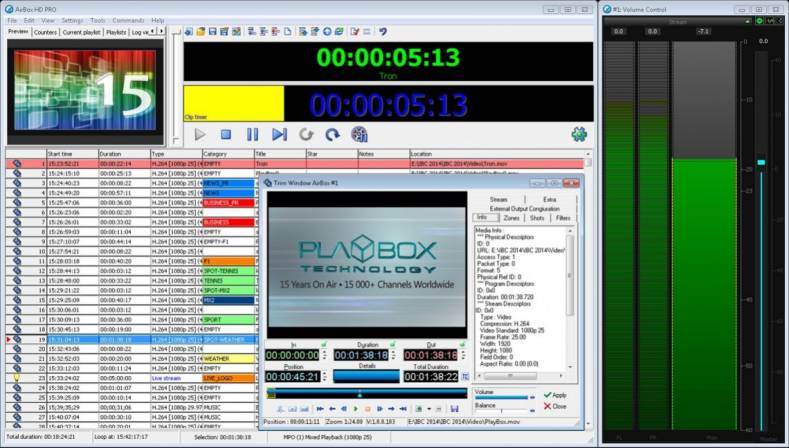 OH-TV now owns a dozen AirBox playout automation servers that are working in sync with network-attached-storage on a daily basis.

OH-TV, a broadcaster and international TV network provider, has expanded its playout capabilities with the installation of 10 new AirBox playout channels from PlayBox Technology.

The new purchase, which follows the London-based broadcaster’s success with Playbox technology since 2008, will allow OH-TV to offer playout services to other broadcasters in addition to producing and transmitting its own channels.

OH-TV distributes its own content to viewers in the UK and Europe via Sky satellite and Freeview. It also produces OH USA, which is transmitted via the IP-based UN1TY platform.

Akin Salami, CEO of OH-TV, said they bought their first AirBox playout system in May 2008 and a second one the following year.

OH-TV now owns a dozen AirBox playout automation servers that are working in sync with network-attached-storage 24/7, which were fully integrated by PlayBox Technology engineers. All 12 servers can be operated remotely or straight from the broadcaster’s Master Control Room.

“Its reliability allows us to get on with our core business of making and transmitting programs,” Salami said, adding that his current playout client base includes SMASH TV, TIWA TIWA, Hip TV Nigeria, Glitz, Views channel and VEATZ 24. “They stay with us because they know we are easy to work with and, thanks to PlayBox Technology, highly reliable and efficient.”

With a core demographic of 18-35 year olds, the OHTV Network reaches in excess of 25 million people per month via its international platform, 700,000 per month in the UK. OHTV also produces content for the 35-plus age group in the form of documentaries, business and news initiatives.