Stefan Lange, DP, works with Sekonic C-700 and Rotolight NEO on a shoot

The market is so flooded with LED video lights with conflicting claims from their manufacturers, it has become a daunting task for buyers to separate fact from fiction. Now, Sekonic, the light meter manufacturer, and Rotolight, the maker of LED fixtures, have collaborated to give end users an easy way to quickly and accurately achieve true color results on the set.

Sekonic, based in Japan, and Rotolight, based at Pinewood Studios in the UK, worked together earlier in the year to test Rotolight’s new advanced on-camera LED system called NEO. Using the Sekonic C-700 SpectroMaster extensively in their phosphor chemistry design process, Rotolight was able to develop an advanced formulation, which delivers exceptional color rendering results it calls AccuColor LED lighting technology.

Optimized to measure LED lighting in addition to all types of light sources, the C-700 uses a CMOS sensor to measure, analyze and report the true color temperature and specular characteristics of a given light source including LED, HMI, tungsten, florescent, electronic flash and natural light spectrums.

Color reproduction is important for videographers using today’s emerging new LED light sources. The ability to measure them and accurately control them is more critical than ever. Utilizing lighting systems that offer true color results enables users to focus more on the art and less on the technical side of the shoot.

The Sekonic SpectroMaster C-700, priced at about $1,500, has a color touch screen that displays light-source information as a color spectrum graph that is expandable for closer inspection, CRI (Ra plus R1 to R15), Kelvin (correlated color temperature), Illuminance (footcandle or Lux) and light source filtration values in Mired, CC index as well as filter correction values for major light source and lens filter brands.

Its “Multi Lights” display enables quick data comparison of four lights with full data on each at the touch of a finger. Its “Multi Spectrum” mode enables displaying spectral graphs of three sources for quick visual comparison.

Different than any spectrometer now available, the C-700 not only displays more ways to view and compare light-source information, it also provides filtration information to correct and modify light color for cleaner recording and simpler post process.

Rotolight Neo’s color temperature is adjustable from 3150K to 6300K in ten-degree Kelvin steps using a rear rotary knob. A second rotary knob allows users to dim the light from 100 to zero percent output with no color shift. An electronic display on the back shows, with an electronic display provided for fast and confident color tuning.

At full output, the 120 LEDs produce a peak brightness of 1077 lux at three feet. The fixture draws only nine watts of power and is priced at $399.

When Rod Gammons, the inventor of the Rotolight, discovered the Sekonic C-700, he knew he had finally found the tool he needed to accurately measure and monitor his development of the AccuColor system. As a result, Rotolight and Sekonic decided to collaborate on mutual sales and marketing to develop a wider awareness of the importance and need for color control and accuracy.

Stefan Lange, director of photography and visual FX artist with credits that include seven James Bond films, Batman and Notting Hill, discussed the collaboration on a set at Sony's Digital Motion Picture Centre at Pinewood Studios in London, where Rotolight is headquartered.

“The new Sekonic C-700 SpectroMaster takes the guesswork out of measuring color temperature on set. Using the clever graphic interface of the C-700, I can easily read and manage the array of hues in a scene and then dial in the color to my Rotolight NEOs and ANOVAs. It’s a great combination. The C-700 is really valuable in a controlled studio environment — priceless on a ‘run and gun’ location when the camera just can’t tell you everything you need to know.” 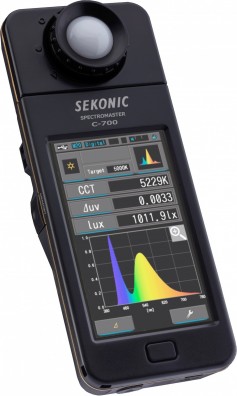