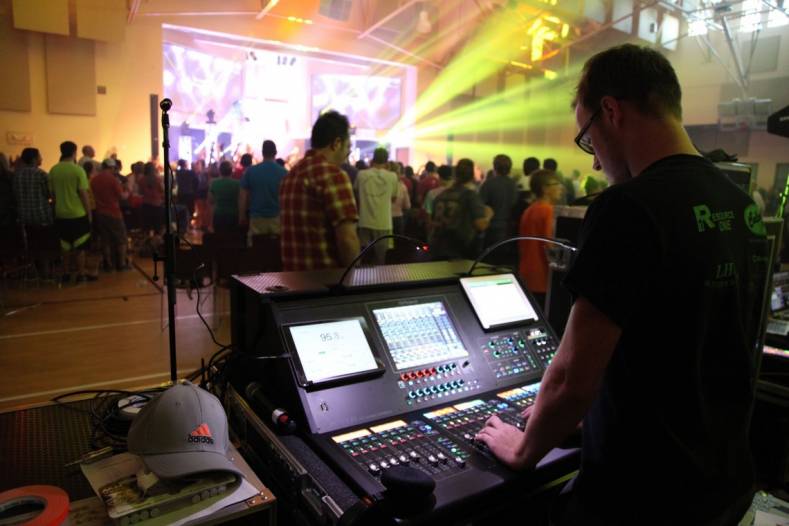 Inspirmedia founder Phil Grimpo and his team produce live A/V presentations for church services and larger worship events, concerts, and corporate events; which all make extensive use of video, graphics and lighting, as well as Inspirmedia’s consulting, training and sales services.

“Our main limitation with [his previous Roland consoles] was channel count, even in smaller churches which had praise bands, so when I heard that the M-5000 Live Mixing Console was coming out, with up to 128 audio paths, I was immediately very excited,” Grimpo said, adding that he believes he’s got the first production model in the world.

With the ability to interface with Dante, MADI, SoundGrid, the Roland M-5000 Live Mixing Console is the first product based on the company’s Open, High Resolution, Configurable Architecture (O.H.R.C.A.) platform. This delivers definable audio paths, supports multiple audio formats protocols and offers pristine 96 kHz sound quality throughout the system. In fact, the Roland M-5000’s internal mix architecture can be defined for mixing channels, AUXs, Matrices, subgroup buses, and MIX-MINUS buses within a range of up to 128 audio paths, allowing users to create a console structure to suit the needs of the application.

The M-5000 has two built-in REAC ports, plus two expansion card slots with seven expansion card options including Dante™, MADI, Waves SoundGrid®, or more REAC ports, as well as audio embedded over video protocols. The back panel includes 16x16 analog I/O, 4x4 AES/EBU, a 16x16 USB audio interface, connection for control via an iPad connected or wireless, and control ports including foot switches, GP I/O, RS-232C and MIDI. All of this capability enables the console to see up to 300 inputs and 296 outputs, all at 96kHz and even more at 48kHz.