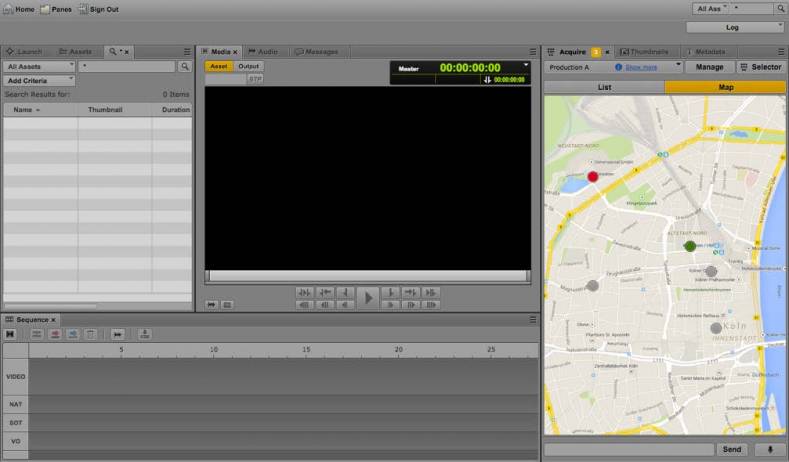 News producers can determine the location of their roving reporters thanks to geo-localisation.

Make.tv Acquire is a new plugin from the Germany based developer which enables third-party solution providers to integrate the functions of the make.tv Live Video Cloud into their own applications. As part of this development, Avid has certified the integration of the plugin within the MediaCentral Platform.

With make.tv Acquire, Avid MediaCentral Platform users can access the make.tv Live Video Cloud. For example, news reporters can upload live streams using the free make.tv Mobile App and, at any time, the producer can determine the location of their roving reporters thanks to geo-localisation, query their online status and communicate via a chat function and integrated intercom. On top of this, a tally light in the make.tv Mobile App notifies the reporter as soon as the supplied live stream is on-air.   As a result, make.tv says it is becoming a daily business tool for Avid users and news reporters. Compatibility with other tools, such as make.tv Selector and make.tv Manager, means that the content generated can be selected, managed and distributed with excellent flexibility. Producers also have the option of transferring their content to Avid Interplay Production.

“In our internet live production tool, we are bringing together all of the features essential for the cloud-based acquisition, production and distribution of video content. Live formats such as news, events, sports and conferences can now be produced more quickly, more independently and most cost-effectively than ever before,” said Andreas Jacobi, CEO, make.tv. “The certification for the Avid MediaCentral Platform is a significant step on our journey towards revolutionizing live productions through cloud-based architectures.”    At IBC make.tv will demonstrate make.tv.

Owned by SMT Streaming Media Technologies, based in Cologne,  Make.tv is a cloud based live video production platform. It is used for production of multi-camera live streams, mixing with pre-recorded media and mobile/audience cameras, and distributing it live to Facebook, live destinations such as YouTube Live, many CDNs, or to corporate websites. Inputs can come from anywhere in the world and mixed into output streams as the production studio resides in the cloud. Interactive components include viewer polling and voting as well as inviting the audience to become part of a show with their own live video.  Clients include MTV/Viacom, Perform, Plazamedia, ProSiebenSat.1, ZDF and Mercedes Benz.