At IBC, Joseph Electronics will introduce its DFT-16 Fiber Transport system, which features 16 paths of 3G/HD-SDI, ASI and MADI signals over a single fiber.

In a unit requiring only 1 RU, all signal paths in the Joseph DFT Series are field-configurable in pairs of two in order to meet any send/receive requirements. Redundant power supplies are standard to ensure a complete backup of critical paths. Full-fiber redundancy with automatic fail-safe switchover is available as an option for all DFT Series frames.

The first models will include opticalCON QUAD to four STs or to two opticalCON DUO's. These little problem solvers are ideal for OB, D-SNG and satellite applications.

Also new for IBC is the Shadow Box, an addition to the popular Caddie line of fiber optic interfaces. Featuring multiple channels of 3G video, IFB, intercom and audio, the rugged throw-down box can be powered via hybrid copper/fiber cable or operated with ST fibers and locally powered.

The system can also be outfitted with a standard Anton-Bauer battery that can act as a fail-safe in the case of a power failure. With installed options, the Shadow Box can also power a SMPTE-equipped HD camera. This system is ideally suited for news stand-up positions or remote interview positions for sports. 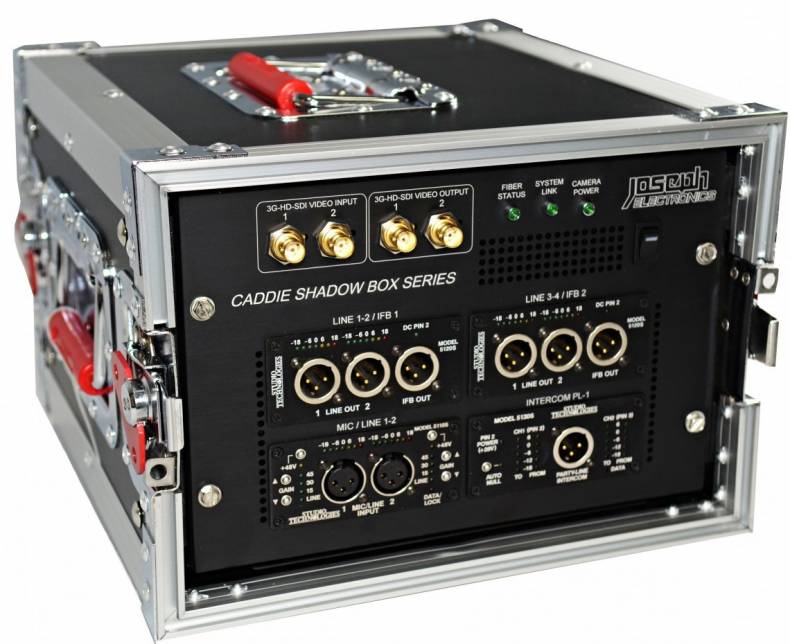