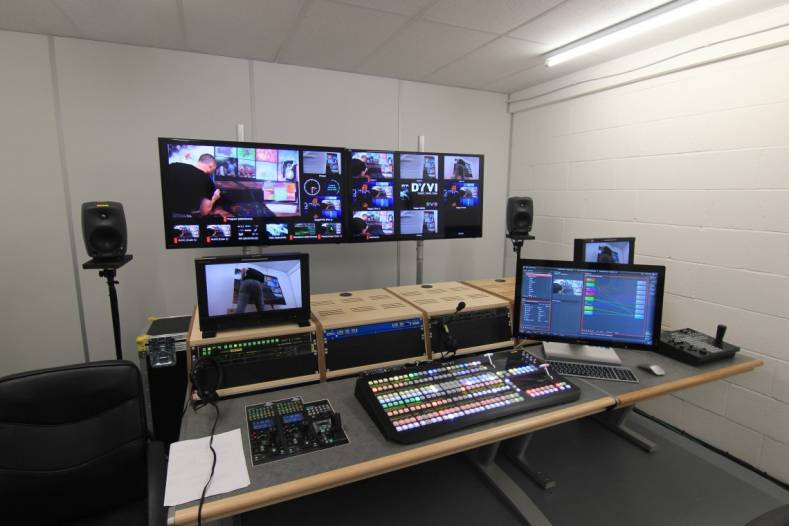 Gearhouse remote IP demo will look a bit like this.

At IBC, Gearhouse Broadcast will demonstrate remote production over IP with manufacturers, including EVS, Hitachi, Riedel, Tata Communications and Lawo.

Using a single 10Gbit 10km fibre, HD footage from two Hitachi SK-HD1200 portable production cameras and a Panasonic AW-HE130 pan-tilt camera will be transported by two IP-based servers. These signals will be carried and then cut together by an EVS DYVI switcher. Audio and comms signals will also carried remotely through the DYVI set-up.

EVS’ DYVI solution, which Gearhouse was one of the first to invest in, combines creativity with simple, secure operations and technical reliability to enable live remote production. The only system that allows remote and sharing production resources, DYVI can transfer uncompressed video and auxiliary data from the remote location. It benefits broadcasters by reducing their operational costs and increasing their production flexibility and creativity.

“Remote production is one of the most exciting developments to emerge in broadcasting in recent years, and one that we’re increasingly being asked about by our customers,” said Ed Tischler, head of projects at Gearhouse Broadcast. “It’s still very much in its early days. But new technology such as the DYVI IT-based switcher from EVS means that we’re now in a position to offer remote production as a workable solution, so that users can take advantage of its many benefits.”

Gearhouse Broadcast COO Kevin Moorhouse added: “Recognising the potential in emerging technologies and finding ways to bring them to our customers has been key to our success over the years. And this is another important milestone for Gearhouse. We were one of the first to invest in 4K cameras, and we were among the first to commit to the concept of DYVI, which is playing a major role in this demonstration. Remote production is set to play a fundamental role in the future of our industry.”