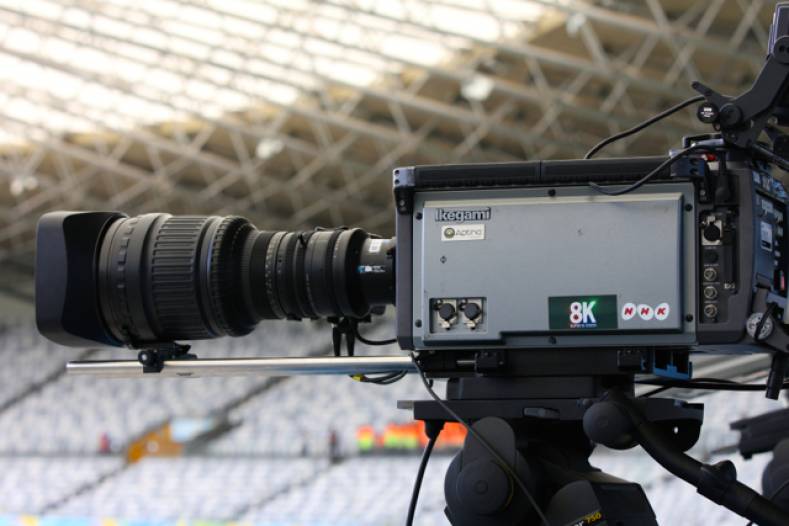 The NHK/Ikegami SHK-810, six of which will be deployed around Yankee Stadium, is 90 percent smaller than first-generation 8K cameras.

No longer limited to Japan, production tests of 8K acquisition are set to begin in the U.S., as Major League Baseball will work with NHK, the national Japanese broadcaster that has spearheaded 8K development and a variety of tests overseas, to produce a multi-camera 8K test of a live game at New York’s Yankee Stadium on July 17.

It will be the first MLB game ever recorded in 8K (7680 x 4320-line resolution, or eight times the resolution of a typical 1080-line HD image. (Although several Japanese league games have been shot, but not broadcast, in 8K for experimental purposes).

Often referred to as “Super Hi-Vision,” NHK also is simultaneously working on the development of 22.2 channel surround sound audio, with the goal of mainstream broadcasting in Japan by the year 2032. Experimental transmissions of the high resolution (and high frame rate of 120 fps) images were tested at this year’s FIFA Women's World Cup Canada tournament earlier this summer as well as during the 2012 London Olympic Games and at the Cannes Film Festival showcasing “Beauties À La Carte,” a 27 minute short film shown on a 220-inch screen. The world's first 8K-compaible television was unveiled by Sharp at the 2013 Consumer Electronics Show.

As for the 8K Yankee game, while it will not be broadcast in 8K, members of the media will have the opportunity to view the production on 8K monitors, which will be onsite in a special suite.

In 2015, Ikegami evolved 8K production even further with its 4th generation UHDTV camera, the SHK-810 8K. The camera represents the world’s first hand-held 8K ultra HD camera system and employs a single 33 million-pixel Super 35 CMOS sensor that achieves 4,000-line horizontal and vertical resolution. The SHK-810 is 90 percent smaller in size and weight compared with the first generation camera, and operability has improved significantly.