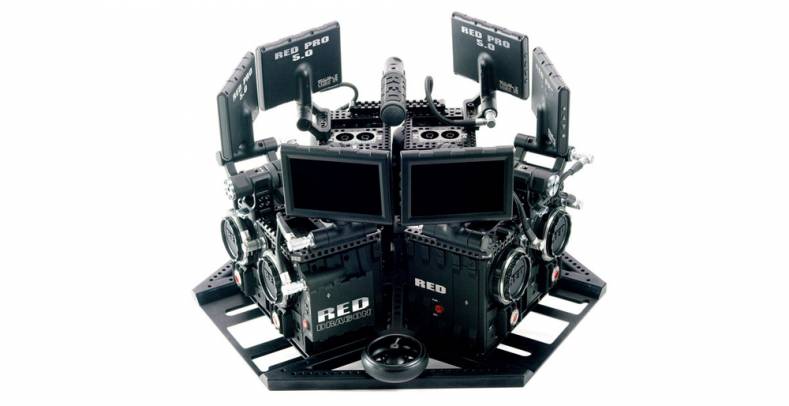 Multi-camera coverage of golf’s US Open this week is to be live streamed to virtual reality headsets in what is claimed as a broadcast first. Fox is leading studio experimentation into the new format through tech incubator Fox Innovation Lab.

Fox Sports is working with VR specialists NextVR to ring the course with five camera rigs. The streams will enable up to 300 people a day to view the action on headsets at VIP areas on site. VR coverage will also be streamed to Fox Sports locations in New York, LA and Vancouver.

“Live transmission is really the killer app for virtual reality, enabling viewers to witness sporting events as they happen from locations beyond a front-row seat,” says DJ Roller, co-founder of NextVR.

NextVR’s system uses a compression algorithm originally devised for 3D TV, and typically works with rigs comprising multiple RED cameras. It has been tested by the NBA, the NHL and at a NASCAR Sprint Cup Series race with Fox Sports where a 360-rig was mounted in the pit lane. NextVR also demonstrated the tech to the International Olympic Committee (IOC) last September with a view to using it to cover Rio 2016.

There is much to explore in terms of live VR coverage. Some tests have employed a 360-degree single position 'best seat in the house', an idea being to monetize a pay per view experience of a virtual seat next to the court. Multi-camera VR gets more complex to set up and editorialise. Calibration of lenses for tennis or basketball may be straightforward because the court lines are identical at each venue, but the different dimensions of golf holes or other sports venues (English Premiere League soccer pitches are not uniform) might add time, and therefore expense, for a broadcaster. In addition, will the viewer be able to switch between feeds and in effect be the director, or will a multi-lateral feed be produced? Either way, what are the implications on the visual motion and the position of the viewer's gaze when a 'cut' is made? How will sound be incorporated so that the audio responds naturally to what is being seen.

NextVR chairman, Brad Allen says its system can be set up in just a few hours. What's more, no camera operator is required. “You can have multi-camera VR positions so that the viewer [within a Samsung GearVR application] can switch between cameras at each goal or on the manager and coach,” he says. “This year is about seeding the market. 2016 will see the first pay-per-view live VR stream.”

Hollywood marketeers have latched onto VR as a shortcut to publicity for theatrical releases including Jurassic World. Fox is leading studio experimentation into the new format through tech incubator Fox Innovation Lab.

It launched last year with a remit to 'enhance the consumer experience of content through televisions and mobile devices of the future' tapping ex-Red camera evangelist Ted Schilowitz to evangelise the future. That includes working with Samsung and others on bringing High Dynamic Range to future home entertainment content but it is its VR work that has caught most attention.

Fox commissioned VR promos for The Maze Runner, The Book of Life and Wild. Other titles on Fox's books, such as War of the Planet of the Apes and the Avatar sequels are candidates for a VR companion. Later this year Ridley Scott's The Martian will hit cinemas accompanied by a VR short from the director.

“The next two to three years will see the creation of an ecosystem for VR content to be distributed, bought and consumed by viewers,” explains Felix Lajeunesse, co-founder, Felix & Paul Studios which produced Wild VR. “Right now there are no models to generate revenue so it makes sense for budgets to come from hardware manufacturers who need to seed the market with content or from marketing where VR serves an immediate purpose.”

“Our ongoing efforts with NextVR are exactly the kind of relationships we are exploring with our new Fox Lab platform,” said John Entz, Fox Sports President, Production. “Virtual reality is most certainly delivering a new level of excitement to next-generation production possibilities and it will be great to gauge the reactions of the audiences who get to sample it at the US Open.”

US Open 2015 highlights will be included on the NextVR portal, which will be available on all virtual reality devices, including Oculus, Samsung, Sony and others.

Batman (1989) producer and co-owner of NBA side Golden State Warriors, the LA Dodgers of MLB and MLS side Los Angeles FC, Peter Guber, has invested in NextVR and joined its advisory board. Also on the board are Scott Teissler, former CTO of Turner Broadcasting, and Doug Perlman, founder and CEO of Sports Media Advisors.

“For those who haven't experienced it yet, it’s hard to imagine what NextVR is capable of delivering with their live virtual reality technology,” said Guber in a statement. “They have engineered the closest thing to putting you in the best seat in the house virtually that is possible. It’s a game changer for live sports, festivals, concerts, shopping, and travel.”