Installing professional speaker systems is a daunting task for amateurs. From broadcast studios and recording control rooms to major public performance arenas — the installation of specialized speaker systems requires trained experts who can recognize acoustic issues and make adjustments for them.

Expertise is required because the acoustics of spaces vary from place to place. Installers require a virtual toolkit of speaker technology and tricks to match the right components with the environment at hand. This necessitates not only specialized knowledge through training, but repeated experience working with different kinds of sonic problems.

That said, certain types of speaker systems have emerged over time as the best solutions for various applications. This accumulated knowledge of “best” practices has turned into the key that may unlock the mysteries of speaker placement for a new, more user-friendly sound system coming to market this summer.

Bose, a company that has long simplified home sound systems for consumers, has now taken its user simplification philosophy to the professional market with a music and public address system that can be set up by non-professionals for audiences of 1,000 people or less.

Bose F1 speaker system can be easily adjusted to match the audience or studio environment.

Bose’s new F1 audio system, shipping in late summer of 2015, is a portable audio system that is essentially the equivalent of “point and shoot” photography for loudspeakers. It is mainly designed for musicians, DJs, public speakers, houses of worship and schools — in fact anyone who requires a sound system for spaces that hold audiences of up to 1,000 people.

What’s unique about the F1 is it uses flexible array technology perfected in major rock concerts held in large arenas and stadiums. It makes the same very expensive technology now usable in smaller spaces with easy-to-use diagrams for simple set-up by anyone. 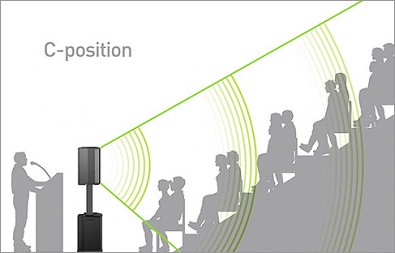 The loudspeakers are mounted on a specially designed flexible baffle. The user pushes or pulls the array into position to create four vertical coverage patterns: “Straight,” ”J,” “Reverse J” or “C.”

Once set, the system automatically changes the EQ to maintain optimum tonal balance for each unique coverage pattern. The positioning of the speakers allows the best possible coverage pattern for the audience. 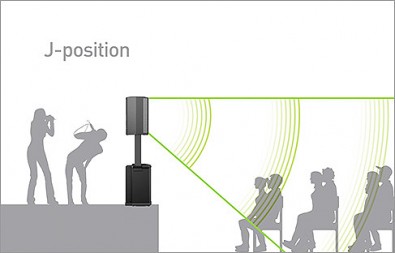 Because the speaker system is adjustable, users can maximize audio delivery to desired points.

Each modular Bose F1 system consists of two parts. One is the Model 812 Flexible Array Loudspeaker, which has an eight 2.25-inch driver mid/high line array — each mounted in a custom waveguide.

The 812 speaker, which weighs 44 pounds, also has a 12-inch low frequency woofer with a lower crossover point and a two-channel integrated mixer which can take line and mic inputs. This speaker, with an internal 1,000 watt amplifier, is said to maintain excellent vocal and midrange clarity. 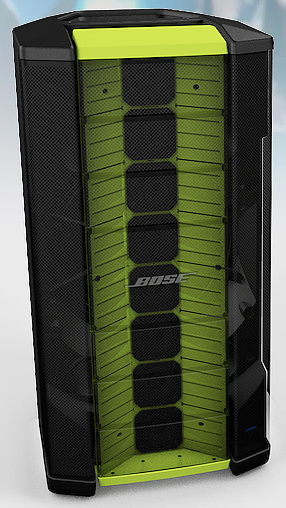 The F1 modular system is comprised of two sections; the flexible 812 speaker array and two 10-inch sub-woofers with a built-in 1Kw amplifier.

The second F1 component is the subwoofer with it’s own internal 1,000 watt amplifier. The subwoofer weighs 54 pounds and is smaller and easier to carry than conventional subwoofers. It has two high-excursion 10-inch drivers.

When the two speakers are mounted together, the subwoofer sits on the floor, an integrated mounting stand is raised and the flexible array speaker sits on top. Normally, a complete system consists of an F1 system on each side of the stage. 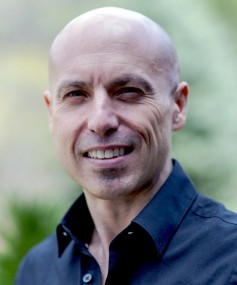 Craig Jackson, product line manager for professional portable systems at Bose, said the F1 was designed to be simpler and easier to understand for use by people with no audio training.

“These customers value portability, aesthetics and ease of set-up,” he said. “We focus on providing the right feature set. We don’t do every single feature. We try to understand what are the key things that people need and not overcomplicate the system with a lot of extra stuff. That’s where people get tripped up in sound system installation.”

For end users, Jackson said, the F1 is very easy to operate. “The F1 uses very simple visual aids that tell the user how to set-up the array,” he said. “You don’t have to have intimate knowledge of audio. You just need to look at the visual, understand the use case of the space you are in and make the appropriate adjustment.”

Bose’s creation of the F1 line came after a few years with its first simplified professional system, the L1, which was designed for performers consisting of one or two people.

“The L1 became a standard among singer-songwriters and a certain segment of the DJ market,” Jackson said. “It has a fixed vertical coverage pattern and works well in small rooms. The system sits behind the performer. He or she can hear the same sound as the audience and adjust it to personal preference.”

Since the artist can hear the L1’s sound along with the audience, the system’s ToneMatch Audio Engine allows the adjustment of 100 preset DSP algorithms, EQ settings and effects for processing vocals and instruments. The simplified presets are grouped by logical selections. No sound mixer is needed.

The success of the L1 led to development of the F1 for larger venues. It is assumed for the F1 system the speakers will be fed by a small mixer system for adjustments. Neither of the simplified portable speaker systems use Bose’s more advanced control software, which requires training for its users.

“We do training for our installers and dealers, but not for end users,” Jackson said. “What happens with the smaller systems is people just learn about it over time. As they advance in their knowledge, they ultimately understand enough so that they can use it well. There’s no real easy way to get training. I won’t call it a strategy — it’s really more of a status quo.

“We don’t use DSP control software for these small portable systems,” he continued. “This is about keeping it simple for non professional users. We make it easy to focus the sound so you can have better coverage in your room. Those are elements that competitive speaker systems don’t have. That’s the way we try to take away the guesswork for customers. We make our equipment sound as good as possible out of the box so there is a minimum of tweaking to get it going.” 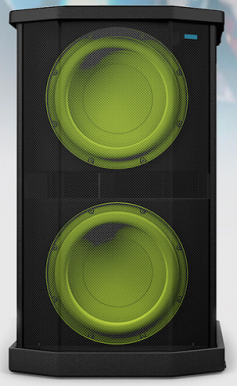 Bose subwoofer assembly. They can be used with the F1 or as a separate module.

The end user pricing for the F1 system is $1199 each for the Model 812 and the subwoofer, Typically, two systems are used, but the components can be mixed and matched and used separately.