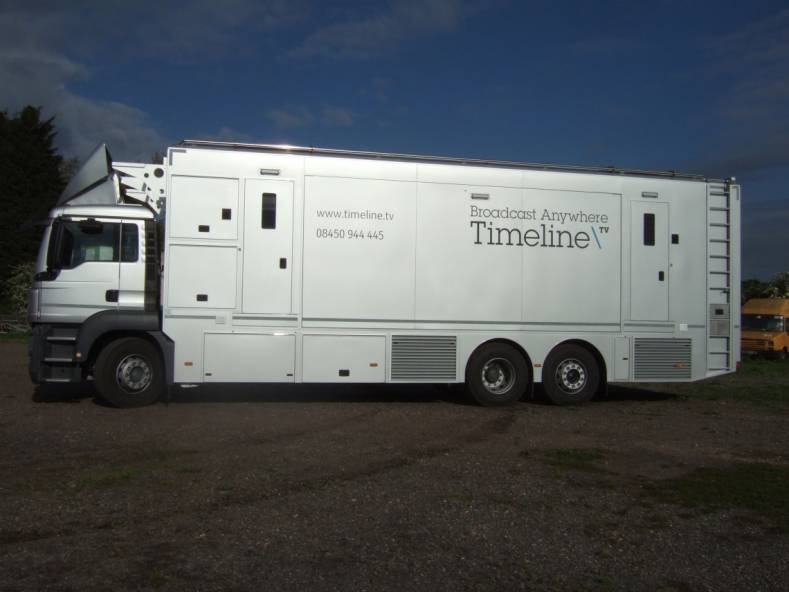 Timeline's UHD 1 OB vehicle test shot the rugby final in 4K at the end of May and goes into action in earnest in less than 8 weeks.

Timeline, a relatively new entrant into the UK’s outside broadcast supply scene, has been commissioned to build and run a 4K scanner by BT for the telco’s August launch of BT Sport Ultra HD. The truck is kitted with an array of the latest 4K production gear including Sony’s 4300 2/3” UHD 4K cameras, Fujinon 2/3” lenses and a Snell Kahuna UHD vision mixer and Sirius router.

Timeline's award of a four year contract kicks off with the launch of the channel for UHD coverage of the Community Shield on 2 August.

While other trucks are 4K-ready or 3G-capable none of course had had to be equipped for 4K acquisition.

Timeline says its 4K unit will be available for hire when not in use by BT Sport.

Dan McDonnell, Managing Director of Timeline, said: “The challenge of this emerging standard has been to work with manufacturers to find solutions to enable UHD productions to be made to the same high standards as HD programs.”

Built by Timeline’s systems integration division, the truck includes Sony's 4300 2/3” UHD 4K cameras which were only announced at NAB.

Timeline has bought twelve of them and already used them in action alongside Sony F55's to test shoot the rugby union Aviva Premiership final at Twickenham, on 30 May.

The 4300's have the capability to shoot in HD as well as 4K and up to 8x super slow motion HD footage. They also support High Dynamic Range and the ITU-R BT.2020 colour gamut, enabling more precise colour reproduction for vibrant live broadcasts.

Slotting onto the B4 mount will be Fujinon UHD 4K 2/3 inch 80:1 box and 22:1 ENG glass.The UA80x9 and UA22x8 zooms achieve a focal length from 9mm in wide angle to 1440mm for the EFP Box type UA80x9 lens; and 8mm to 352mm for the ENG type UA22x8 model. The UA80x9 features a 'optical stabilization mechanism' that to protect for image shakes caused by vibrations and wind.

A 'floating focus system controls multiple lens groups according to the shooting distance, delivers high-resolution and high-contrast images from close-up to infinity. This is achieved by Fujifilm’s proprietary multi-layer coating processing “High Transmittance Electron Beam Coating (HT-EBC)” which is applied to the lens for enhanced transmittance and colour reproduction.

The vision mixer chosen by Timeline is the Snell Kahuna 9600 mainframe with 4M/Es, driven from a Maverik control panel. The Kahuna delivers six layers per M/E. Snell FormatFusion3 technology enables the Kahuna to handle HD and UHD 4K Level A and B inputs and outputs simultaneously in realtime. Its clipstore integrates branding capabilities, eliminating the need for external graphics devices. In addition, the units routing requirements are handled by a Snell Sirius 840 router with Advanced Hybrid Processing, enabling channels to be handled, processed and controlled independently.

According to Axon, these toolboxes are developed to ease the challenges of a 4 wire production setup where the left top corner (channel A) is used to carry VANC and HANC data. In order to accommodate 4K signal distribution Axon also developed the GDR416 for this truck.

Other 4K Synapse modules involved in the productions are 4K up converters and 4K down converters. All other Synapse video processing units supplied are capable of handling 3Gb/s signals. A number of these video processing modules have been executed with fiber enabled I/O-panels which enable the conversion from video to fiber without the need of additional equipment. To handle Dolby requirements in the truck Axon supplied the Synapse DEE28 which is a multi-format Dolby stream decoder and Dolby E encoder and voice over module.

The onboard multiviewer is a Kaleido-Modular-X. It has a FlexBridge coax cable bridging between the input and output modules allowing for the installation of the input stage next to the router or sources— and the output stage next to displays — for “simpler, cost-effective cabling installation with none of the risk associated with HDMI extenders” according to the company.

Finally, the OB unit is installed with three UHD-enabled EVS XT3 live production servers. In 4K mode the three servers allow Timeline up to nine channels of UHD highlights, replays and playback feeds. A server can be set to continuously record two 4K cameras while simultaneously providing UHD instant replays or all nine feeds can be used for highlight and replay production in the higher resolution.