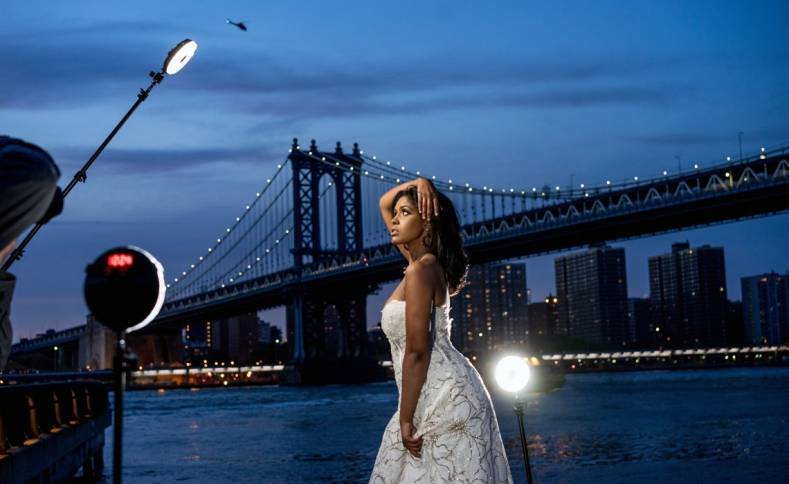 2015 is fast becoming the year of LED lighting for imaging. LED technology has dramatically improved for video and film illumination, and the prices are falling fast for high-quality fixtures. A good example is Rotolight’s just released compact NEO light.

Rotolight, based at Pinewood Studios in the United Kingdom, has begun delivering its radically new NEO LED fixture. It’s cutting-edge LED technology at a price of $400 — dramatically lower than similar fixtures in previous years.

NEO is the brightest professional-quality LED light ever made for camera mounting, yet it offers soft illumination that looks especially good for video interviews.

NEO is a circular, ultra-portable on-camera or location LED lighting fixture with a ring-light effect. It’s not only bright and flicker-free, but has knob-adjustable digital readouts for brightness and color temperature. The fixture features a bi-color LEDs with a color rendering index (CRI) of 95 and a skin tone index of 99. It allows fast, tunable color and brightness on location.

Powered by six AA batteries, AC or DC power or D-Tap, NEO runs three hours at full brightness and up to six hours at half brightness with a set of batteries. It weighs 1.1 pounds with six AA cells inserted. The light also comes with an AC power adapter, filters, mounting gear for stand and hot shoe and a ballistic nylon case. It is equally usable by run-and-gun video crews and very precise feature film cinematographers. 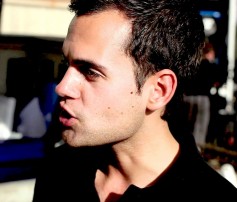 Rod Aaron Gammons, managing director of Rotolight, said the rain resistant NEO puts out 1,077 lux at three feet — making it the brightest on-camera light ever manufactured. “It has a circular form factor that is not only bright, but the color engine is absolutely perfect. You get a smooth catchlight in the eye. Its very, very soft output of light is completely shadowless. This light is a beautiful tool for video, photography or filmmaking.”

NEO is software operated and — in addition to the brightness and color controls — includes features like Designer Fade, a mode for custom fade up/fade down production effects and True Aperture Dimming, which calculates the correct aperture (F-Stop) for a subject at a given distance. An array of cinematographic special effects (CineSFX) provides customizable creative visual lighting effects that include strobe, lightning, fire, cycle and throb.

Mark Tahmin, head of North American distribution for Rotolight at RTS, based in Long Island, New York, said a key to the NEO’s design is its use of custom-made proprietary LEDs.

“The LEDs are made specifically to the standards set by Rotolight in the UK. These are not off-the-shelf batches of LEDs. They were designed and manufactured especially for the NEO. The illumination is eight times brighter than our popular Rotolight RL48 LED lights and the CRI is so good I had to ask twice when I first heard the numbers.

“Out of the box the CRI is 95. The skin tone CRI is 99, which is unheard of among LED lights. Many companies will boast about a high CRI, but this is an extraordinary number. I just bought a brand new Sekonic C700 meter to the tune of $1500 which is specifically balanced for LEDs. In measuring the NEO, I have really not seen any portable lights out there that come close the CRI.”

The NEO, when used with a Phantom Flex 4K high-speed camera, he said — which can shoot up to 2,000 frames per second — will not flicker. “You will not get a blank, a black or a half-exposed frame with the NEO. It’s absolutely flicker free.” 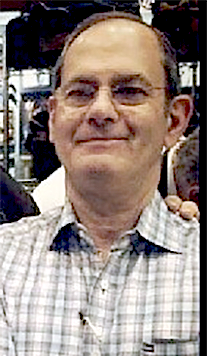 Mark Tahmin, head of distribution for the North American market, says the NEO light will maintain the selected color temperature over any brightness setting.

The NEO has a range of color temperatures from 3150 up to 6300 Kelvin that can be dialed in by observing the digital readout. If a skin tone filter is used on the light, the user balances the color temperature with the filter to get the desired effect.

The NEO, Tahmin said, employs the latest LED technology available. “I’ve watched the evolution of LED lighting,” he said. “It seems that an awful lot of companies will buy an off-the-shelf batch of LEDs, throw it into a configuration and claim to have LED lighting. When in fact these lights are no more than a poorly crafted LED in a shell with very poor output.”

The NEO performs well along side Rotolight’s popular RL48 lights, though it is eight times brighter than the original model. By using the RL48’s filters and adjusting the dials on the NEO, he said, the two lights can be matched perfectly. He recommends using the RL48 for back light, hair light or color illumination and the NEO as the main key light. The RL48 will remain in the Rotolight line.

The NEO significantly lightens the weigh of high-quality video light kits. It is available as a single fixture with AC adapter, filters and case for $399.95 or in a three-light kit with stands and hard case for $1998.98. Using accessories like barn doors, a soft box, rain cover, filter packs and adapters for coupling lights together can add much flexibility to the package. Though the NEO is being delivered now, all of the accessories are expected to be available by the end of the summer. 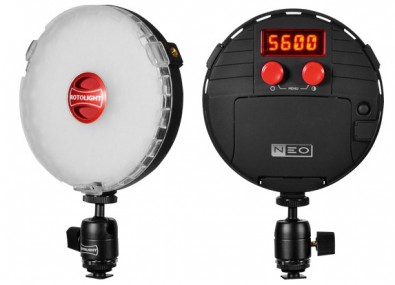 The Rotolight NEO is lightweight and easy to set up. Using the digital readout, the user can set the color temperature over the range of 3150 to 6300 Kelvin.

The Neo was selected as a finalist for the International Association of Broadcasting Manufacturers’ Game Changer Award in 2015 for innovation in camera and ENG lighting products. One can understand why. It pushes the envelope of both quality and cost in video lighting.

Only a year ago, a lighting fixture with the NEO’s specs would have cost more than $1,500. The NEO is proof that LEDs are a fast changing technology.