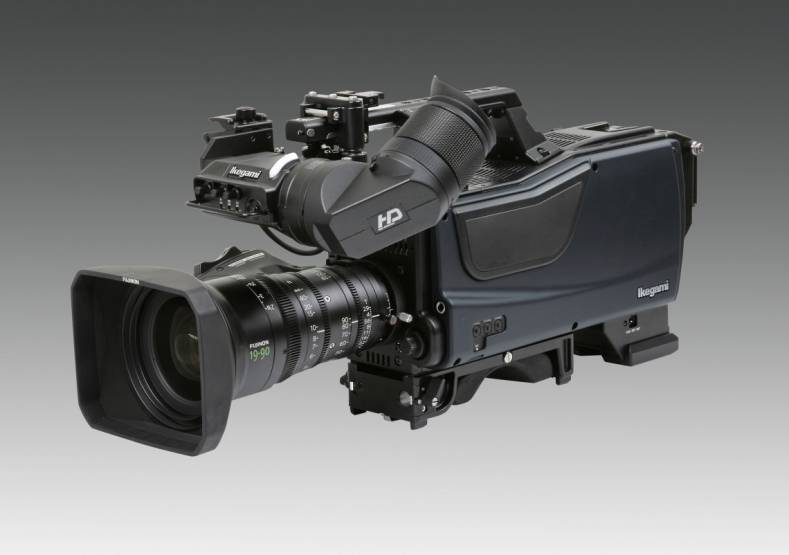 The new the SHK-810 camera is designed both for outdoor and studio production.

While many might scoff at the true practicality of 8K production, representatives from Ikegami, which showed a new handheld 8K camera (as well as a 4K version) at the recent NAB Show, said that customers from around the world show there is “rapidly growing interest” in its ultra-high-definition (UHD, or the widely used “4K” broadcast specification) and Super Hi-Vision (SHV) technology.

“Increasing affordability of 4K UHD consumer television displays is encouraging broadcasters in practically every country to adopt this resolution for new high-budget studio productions,” said Mark Capstick, General Manager of Ikegami Electronics UK. “This helps to ensure that new programs and series retain their value well into the future. Major television productions have a project lead time of anything up to three years so there is good reason to plan ahead for advances in transmission standards. It was evident at NAB 2015 that several European broadcasters have already committed to the early introduction of 4K UHD channels.”

The Ikegami 4K Technology Exhibit this year included a new 4K UHD camera with three 8 megapixel 2/3 inch CMOS sensors (R, G and B) and traditional prism optics. This configuration, Capstick said, delivers the long depth-of-field capability that is important when televising outdoor events such as sports. The camera head has a low profile form factor and employs full end-to-end digital processing. It connects to a newly designed 4K UHD base station. Images coming from the UHD camera were displayed on a 4K 293-inch 4K UHD LED screen from Hibino Corporation.

Also making its first appearance was the Ikegami SHK-810 8K SHV Super Hi-Vision camera. Michael Lätzsch, Broadcast & Professional Video Division Manager at Ikegami Electronics Europe, said preparations are currently under way in Japan to introduce a Super Hi-Vision television service in time for the 2020 Summer Olympics in Tokyo. “This has a horizontal screen resolution of nearly 8K and will make television viewing a highly immersive experience, potentially comparable with a front seat at a live stage event or in a cinema,” he said. 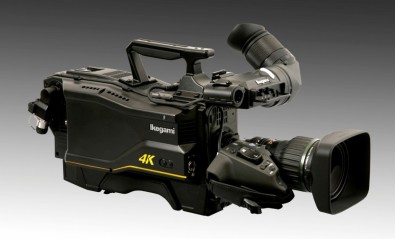 The Ikegami SHK-810 camera head has a single 33 million-pixel Super 35 CMOS sensor, achieving 4,000 TVL horizontal and vertical resolution. This is designed to deliver the tight-focus close-ups required in studio applications such as drama production. Developed in cooperation with NHK, the SHK-810 employs a dual-green color filter to deliver the wide dynamic range of Super Hi-Vision. Resolution limit is 4,000 TV lines horizontal and vertical. Output from camera head to the control unit is 40 gigabits per second via standard SMPTE hybrid fiber, allowing long-distance links for live broadcasting. 8K SHV, 4K UHD and 2K HD feeds are available from the CCU.

An optional system expander for the SHK-810 camera head enables the use of large viewfinders and full studio lenses, converting the portable version into a full-facility studio/field camera. For easy focusing, a viewfinder detail function allows the camera operator to increase the visibility of detail edges displayed on the viewfinder and video monitor channel. Lens aberration correction as well as communication features such as tally and intercom are, of course, available.

The SHK-810 also features a PL-Lens mount that allows the operator to use 8K lenses, cine lenses, 4K lenses and custom-designed zoom lenses for single-chip Super Hi-Vision cameras. A flange-back adjustment system is built-in, enabling back focus adjustment of PL-mount lenses without shims.