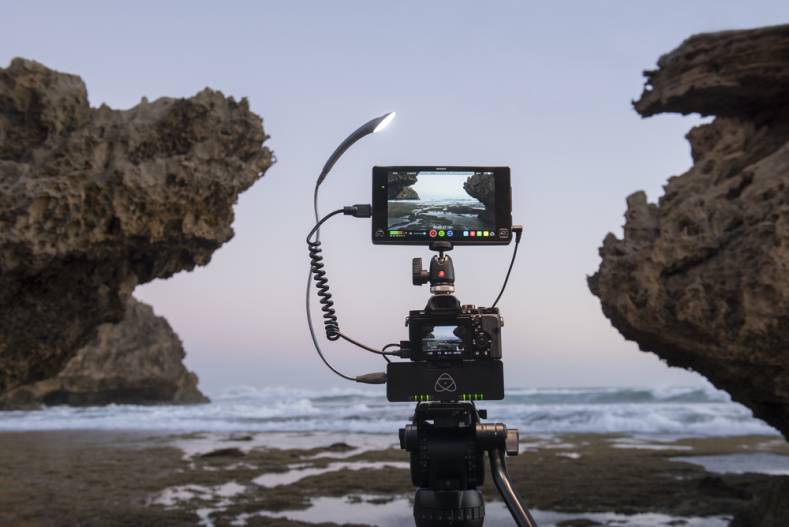 Atmos Power Station on Sony AS7

Atomos is launching a new variant of its recorder and monitor called ‘Bare Bones’ along with software enhancements to the Atom operating system and new hardware functions. AtomOS6.3 includes customizable tagging and play-out server with New AtomOS6. The hardware options include expanded RAW recording support.

A ‘Bare Bones’ version of the Shogun removes all accessories except an SSD media case and AC power supply, but includes a soft carry case for protection and costs $1,695 from next month.

“Shogun Bare Bones is all about accelerating the move to 4K at breakneck speed in combination with the amazing Japanese 4K high quality affordable cameras, allowing customers to utilise legacy Atomos accessories they already own.” said Jeromy Young CEO of Atomos. “We still expect the full Battle Ready Shogun loaded with accessories to be popular but now users can decide what makes sense for their first and second 4K camera rig.”

The concept is extended to Atomos' entire monitor/recorder range. A Bare Bones Ninja 2 is $395; Ninja Blade $795 and Samurai Blade $795.

The complete suite of accessories for Shogun including D-Tap adapter, 5200mAh battery, battery charger and XLR breakout cable is available for an additional $395.

Also available via free download over the coming months is AtomOS6.3 from which Shogun users will gain:

Custom Meta Data Tagging: Shogun, Ninja and Samurai users would already be familiar with the ability to tag content on the go i.e. marking content as Favourite/Reject on the fly or during review and saving out as an XML file that is dropped straight onto the timeline in FCPX. This latest firmware for Shogun permits the creation of own custom meta data tags.

Pre-roll Record or Cache Recording: Even with Shogun not in recording mode, it will continually buffer content internally allowing the user to record the previous 8s of HD recording or 2s of 4K the moment you hit the record button.

Time Lapse Video: The Atomos video time lapse feature allows both the duration of recording in number of frames or length of time and the interval to be altered. Multi stage recording is also possible, altering the time and duration throughout the period of the shoot.

Playlist Generation: One of the key features of Shogun is the ability to playback and review 4K footage on screen or out to a monitor taking advantage of the full suite of monitoring tools to check shot accuracy and tagging Favourite/Reject as a result. The new playlist function allows users to not only tag sections within a clip for play-out but tag entire clips and have them all replayed as a playlist. Convenient when pulling together the best takes of the day or in commercial situations where 4K play-back for immediate storyline review is needed.

Anamorphic de-squeeze: Anamorphic lenses use optics to ‘squeeze’ a 2.39:1 image into a 1.78:1 ratio. With a free firmware update due at the end of May 2015, Shogun users will be able to de-squeeze monitored anamorphic content to their true 2.39:1 ratio. In addition to 2.39:1 anamorphic, Shogun will also de-squeeze the Panasonic 8:3 format. These translate into commonly used terms of supporting 2x 1.5x 1.3x anamorphic lenses.

RAW recording: Handling RAW in high-end cinematography is vital with some cameras on the market only outputting their 4K content in RAW data format over SDI, these include Sony FS700, FS7, Canon C300MkII and C500). On the post production side, some people request to keep the RAW format for grading while others would prefer to encode to a more edit friendly format like ProRes or DNxHR with 3D LUT’s applied. The Shogun will enable users to take the RAW data from the camera and record direct to RAW (wrapped as Cinema DNG) or to edit friendly Apple ProRes or Avid DNxHR codecs in 4K, UHD, 2K or HD.

Expanded RAW compatibility: RAW recording can be an expensive and cumbersome challenge. Individual RAW licenses that can cost up to $1995 are now available for free with the Shogun and they can be recorded to off the shelf SSD from brands like Sandisk, Transcend, Intel. With RAW options available for Sony FS series, Canon C500, Arri Alexa and AJA CION no other monitor-recorder on the market offers more RAW recording options than Shogun, claim Atomos. Sony FS RAW will be available from mid June, while Canon C500/ Arri Alexa / AJA CION RAW will be available from the end of June 2015.

The genlock connection on the back of the Shogun can also be activated via free firmware end of May to allow synchronous playback across multiple video devices.