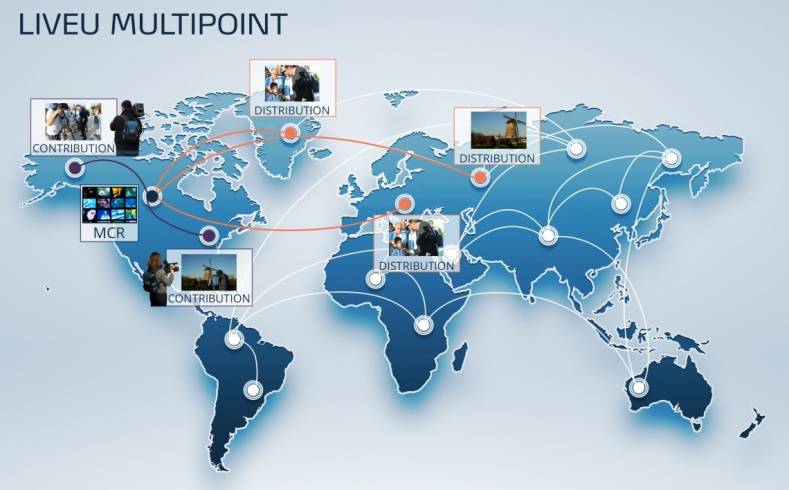 At NAB 2015, LiveU unveiled its second-generation internal and cross-organizational IP video distribution service, LiveU MultiPoint. The cloud-based MultiPoint service seamlessly integrates LiveU’s unified management platform, LiveU Central. With this service, broadcasters can share live feeds simultaneously with multiple end-points over the Internet from within the same interface they already know. The new service provides stations with an inexpensive alternative to satellites to share content across groups with minimal delay, without the usual satellite costs.

LiveU MultiPoint offers distribution of video with minimal delay for up to 100 concurrent destinations via the LiveU cloud distribution server, without requiring additional bandwidth at the point of origin. Any existing LiveU server running the latest software can begin receiving and transmitting MultiPoint feeds. MultiPoint is fully integrated into the LiveU Central browser-based cloud management platform, where all other LiveU devices and applications are managed.

MultiPoint can send high-quality video regardless of the type of Internet connection available at the points of origin or destination. By using intelligent Adaptive Bitrate Distribution algorithms, MultiPoint optimizes live video delivery to different classes of receivers, either over the public Internet or private fiber.

Any LiveU device or application can transmit either to a physical LiveU server for re-distribution to other locations with minimal delay, or feed directly into the LiveU cloud distribution server to be shared in real-time with all destinations. Those using a LiveU LU700 studio encoder or LU200 can share any SDI source in the studio, not just those originating from a LiveU device or application.

MultiPoint can be used with LiveU’s full-field acquisition portfolio, including the LU500 professional backpack, LU200 ultra-small unit, LU-Smart mobile apps and hybrid cellular/satellite vehicles. It will be available for full use by LiveU customers starting this month.