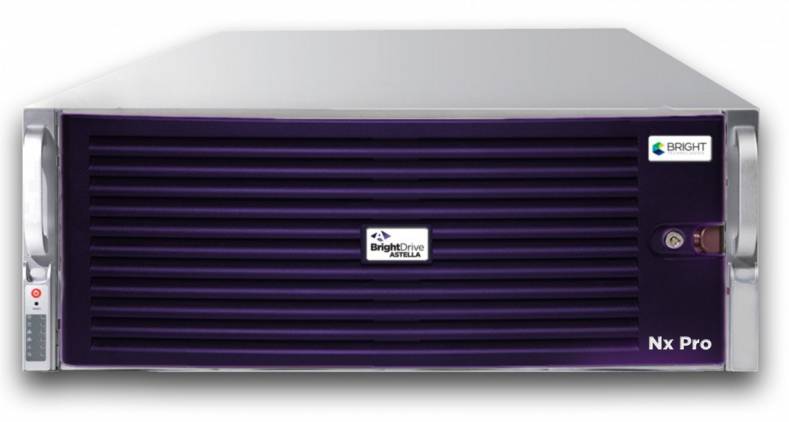 Bright Technologies is launching Astella Nx Pro, in time for NAB. This is a compact NAS appliance that is said to enable high-resolution, real-time workflows “to operate at performance levels that have until now only been achievable from Fibre Channel SANs”.

Developed using Ethernet components within a NAS-based configuration, this represents a major step forward for the industry in terms of output, ease of use and cost-efficiency, claim the developer.

BrightDrive Astella Nx Pro is for post-production and broadcast facilities. It provides six real-time streams of 2K or up to three real-time streams of 4K in a direct-connect 10GbE star topology for up to eight client applications, all configured within a single 4U server. Where an existing LAN infrastructure is already in place, Astella Nx Pro can be simply added in for plug-n-play deployment.

“With higher compression rates becoming more widely used in post and broadcast workflows, we now see customers seeking out a simpler NAS appliance approach to workflow design while still demanding the same high performance that is normally only available from a SAN,” said Shawn Clark, director of sales, Bright Technologies. “The NAS approach offers a number of significant benefits including lower costs, simpler deployment and lower maintenance overheads compared to Fibre Channel SAN workflows. In response to this trend, we are delighted to be launching BrightDrive Astella Nx Pro at this year’s NAB, thus underlining our commitment to customer requirements, and highlighting Bright as a leading developer of technology for the post-production and broadcast communities.”

BrightDrive Astella Nx Pro is supplied with Archiware P5 software enabling users to archive data to LTO tape for long-term storage. All systems feature Bright’s administration software. Also featured are dual FRU power supplies and fan assemblies; a 6-Gbit SAS drive backplane; 36 drive bays with a combination of SSDs and HDDs; and RAID6 protection with 48GB of RAM with the option to upgrade to 128GB. Systems are available in 52TB, 76TB, 100TB or 148TB capacity options.