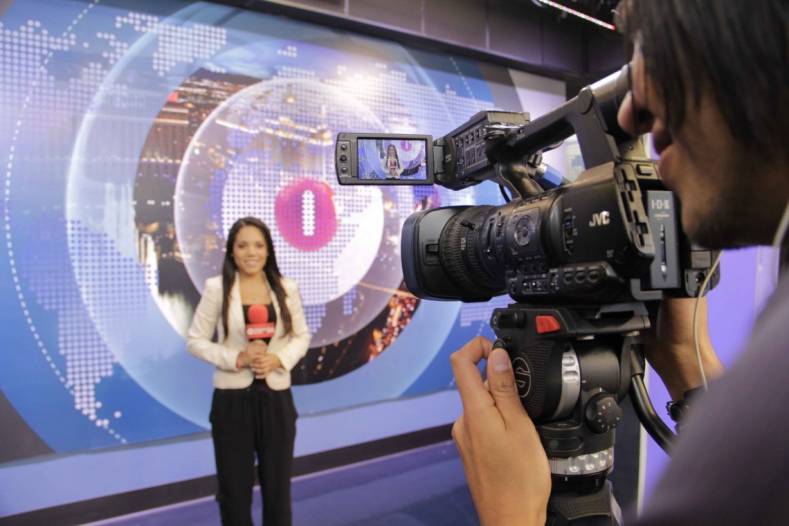 KMCC, a MundoFOX affiliate in Las Vegas, Nevada, is using multiple JVC cameras in the studio and in the field to produce two nightly Spanish newscasts for the market.

The station had been sharing production space in town, but moved into a new facility in the Boulevard Mall, which is about two miles east of the famous Las Vegas Strip, last August. The mall provides convenient access to the station’s Spanish-speaking audience for man-on-the-street interviews.

The new studio is unique because the area that houses station sales and administrative personnel opens directly to the studio floor.

Roy A. Phillips, II, regional director of engineering for MundoFOX Las Vegas, said that there is infrastructure to support four-camera live productions, but most newscasts use two new GY-HM890 cameras in the studio. The station also uses three GY-HM650 ProHD mobile news cameras in the field.

Phillips said he is planning to upgrade to JVC cameras at KYVV, which is co-located with San Antonio CW affiliate KMYS. “You have to make sure your camera can get the job done. These cameras – they hit the mark,” he said. “They put out a really good picture.”

While KMCC field reporters tend to use tripods, the GY-HM650 has allowed ENG reporters to produce some inventive handheld shots.

“For the majority of the operational controls that need to be accessed in the field, it’s pretty simple even for non-technical people. It allows everyone to be one-man bands,” Phillips added. “They get very creative. The weight and size of the camera is allowing them to do that. It’s a brave new world – and JVC is at the forefront.”

JVC’s dual codec design allows live transmission when paired with a 4G LTE modem or hotspot. With Zixi’s Advanced Streaming Technology (AST), the camera provides content-aware error correction and bandwidth shaping, while Zixi proprietary algorithms maximize bandwidth to ensure reliable transmission even under difficult conditions. While KMCC is not yet using its GY-HM650s to stream live HD reports from the field, Phillips is considering implementing the technology as a “major initiative” for both KMCC and KYVV in San Antonio (DMA #33), both of which have been MundoFOX affiliates since the network was launched in August 2012.