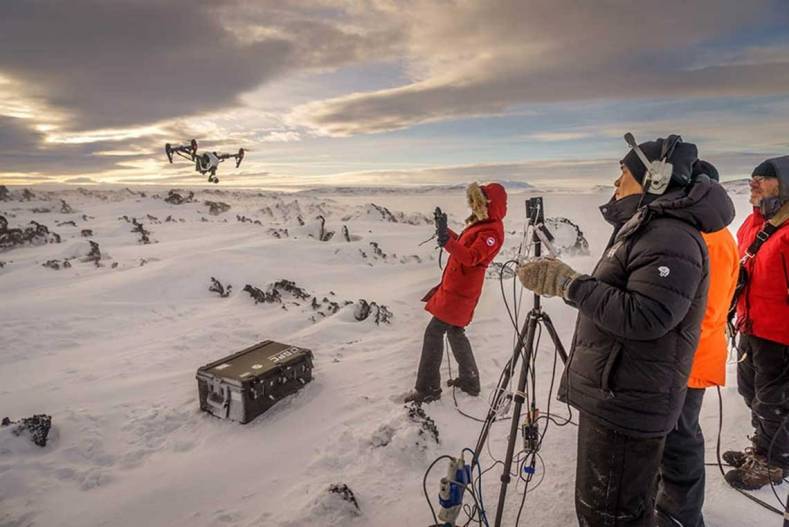 The NAB show has seen growing interest in drones, with exhibits drawing large crowds. This year sees a pavilion devoted to UAVs and drones.

In the days when Studios sent out staged black and white publicity shots, the director sitting on a camera crane was a favourite. The crane represented power shooting—the bird-eye view of the battle scene. As cameras have got lighter than the blimped 35mm camera of old, camera cranes have also developed. No music festival coverage would be complete without sweeping crane shots, but the resourceful grips have developed all manner of lighter weight jibs that can free the camera from the terra firma of the tripod.

For real freedom with aerial shots the alternative was the helicopter. Special gyro-stabilised mounts allowed steady shots from the moving platform. However, helicopter rental is expensive, and the large craft are restricted in application

Then along came the drone. Not the fixed wing craft popular with the military, but developments of the radio-controlled model helicopter. The big breakthrough was the control system, and the use of four or more rotors. These model flying machines were much easier to fly than the conventional helicopter, and used electric motors rather than piston engines. Much of the hassle of flying was taken away, and the 'toys' flourished.

The larger sizes could carry quite a payload, several kilos. If the device carried less batteries, albeit with shorter flying time, then a camera could be lifted aloft. The way was open for helicopter style shots, at a fraction of the price. Drones don't replace helicopters, they offer a different way to film from the air. The helicopter is still a valid way to shoot, but drones can have the advantage. A drone can fly through a wood, where a helicopter is too large, anf track is impractical. A drone is relatively quiet, and has much less downdraft than a helicopter. This can be a factor film on powdery snow or autumn leaves. So the drone is a different camera support, not a replacement for existing aerial platforms.

There is a drawback, the batteries don't last very long, ten minutes is typical, the same as the running time of a 1000 ft film reel. That said, crews are used to batteries, cameras rely on them anyway, as do portable lights and sound recorders.

All the attractions of drones meant the drone revolution kicked off at a speed the regulators couldn’t keep pace with. Their natural reaction was to ban or highly regulate the devices.

In view of the huge interest from the production community the NAB are running a drone zone this year. The Aerial Robotics and Drone Pavilion is in south upper To satisfy the regulators, like wild beasts, they will be demonstrated in a “flying cage”. Over twenty exhibitors are supporting the pavilion.

NAB will host sessions and workshops for budding pilots in what is fast becoming an essential tool for the videographer.