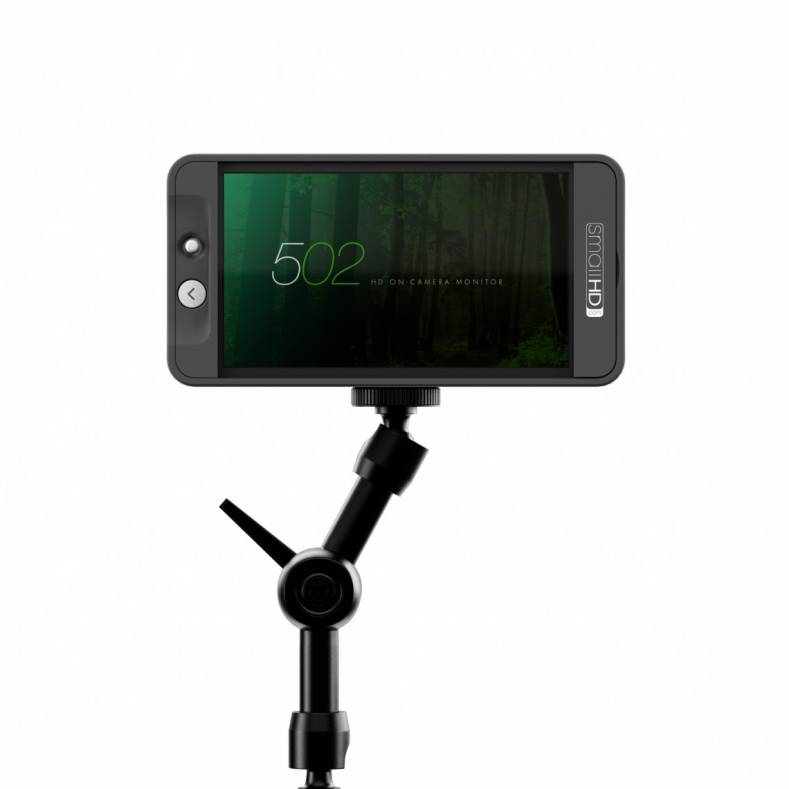 SmallHD is showing the first product in its new 500 Series of 5-inch Full HD on-camera monitors, called the 502. Based on a brand new platform, the device supports 2 digital inputs and displays full HD (1920x1080) resolution images.

The slimline 5-inch diagonal screen takes HD monitoring to a whole new level. With a densely packed 441 pixel-per-inch screen, the cinematographer can depend on the 502 for critical focusing. It also features a 179-degree field of view for group viewing, and a wide color gamut that rivals OLED display technology.

The 502 supports 3G-SDI and HDMI input, output, and cross conversion. The monitor is format and frame rate agnostic, automatically adapting to a wide range of video signals. It provides the remarkable toolsets SmallHD users have come to expect, including the display of industry-standard and custom framing guides, focus assist, false color and zebra exposure indicators, and 3D LUT (lookup table) import. The monitor’s full-size SD card slot that facilitates 3D LUT import, also allows export of screen captures for continuity and other purposes.

An all-new operating system developed for the 502 and future SmallHD monitors greatly simplifies menu navigation. With a flick of the thumb the monitor will instantly zoom in or out of the source image, switch between tool presets, and zoom out to view 3 presets at once. The menus can be customized to allow instant switching between frequently used features.

The 502 is rugged, housed in an aluminum frame with rubberized chassis, and is extremely portable, weighing in at only 9-oz (.25 kg) and measuring just 2.95” x 5.78” x 0.80” (75mm x 146.8mm x 20mm). The 502 monitor can be carried in the pocket, even with a pair of rechargeable LP-E6 batteries installed. The monitor can also be powered by an AC/DC adapter as well as from the D-tap on a camcorder or camera battery pack using the LP-E6 battery interface. Power draw from the monitor is minimal, allowing all-day operation off of two LP-E6 batteries under normal use.