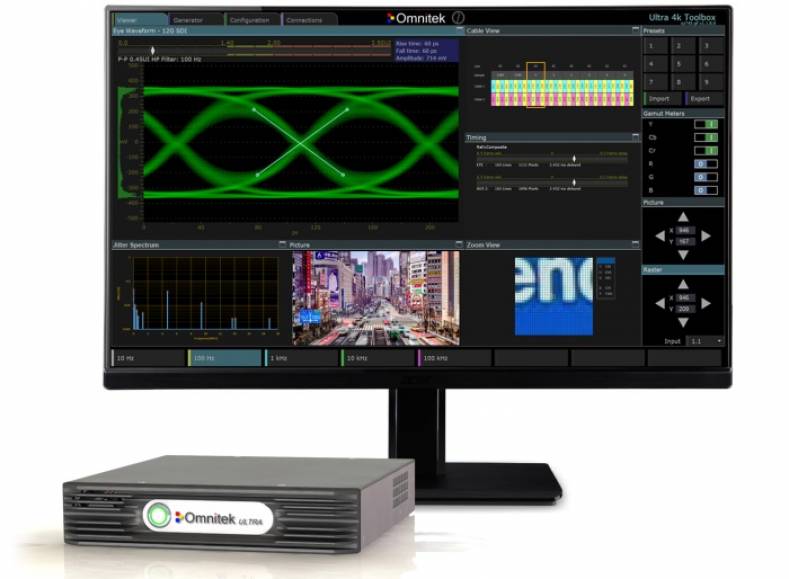 The new Ultra 4K Tool Box V1.2 adds several useful abilities to an already powerful package from OmniTek. A major feature of the new V1.2 is the ability to display a full resolution, full frame rate ‘Picture View’ of the input video. This comes as the result of two new tools in the Tool Box.

One new tool is the ‘Picture’ display added to the Tool Box’s Viewer Window, complete with a crosshair cursor that picks out the pixel at the center of Data View, Zoom View and Data Waveform displays. The other new tool is the option to display the user interface on an HDMI monitor plugged into the Tool Box.

This ‘Local’ user interface is driven using a mouse and keyboard plugged into the USB ports on the back panel of the Tool Box and can be used either alongside or instead of the Tool Box’s web browser interface. One benefit of using the Local interface is that it allows standalone control of the Tool Box. The benefit to image display is that the Picture View on the HDMI monitor is both full resolution and full frame rate, whereas the pictures that will in future be displayed on the browser will be reduced resolution.

The range of 4K (2160-line) video standards continues to grow with 4K video now being carried on 3G, 6G and 12G-SDI, so the range of 4K standards supported by the 4K Tool Box has also grown. Supported 3G standards now include 4K/30 on Dual-Link 3G-SDI, and both Square Division and 2-Sample Interleave Quad-Link on 3G Level A and 3G Level B. 6G-SDI and Dual-Link 6G-SDI 4K video formats are supported where these are delivered in accordance with the recent working draft of SMPTE ST 2081. The equivalent 12G standards are covered by SMPTE ST 2082 (also currently in draft form).

Other new facilities include measurement of the timing of individual signal links both relative to an external reference and relative to each other, ‘Free Run’ or ‘Genlock’ on each output (SDI, HDMI or DisplayPort) with the lock being made either to an input and to an external sync, a ‘per Cable’ view of pixel data, in addition to the Data View in which this data is shown divided into its constituent inputs, and color-coded to match the SMPTE specifications, and comparison of CRCs calculated for both Active areas and Full fields/frames against the CRCs embedded in the video streams to provide a measure of signal degradation over the transmission path.

The option to overlay the new Picture display with up to two sets of Safe Action and Safe Title cages, either picked from a selection of industry standards offered as presets or individually defined by the user; and Support for remote control using SNMP.

Users of earlier versions of the 4K Tool Box can download a copy of Version 1.2 software from the OmniTek website. Also available for download are a set of Update Instructions, a Release Note giving more information about the changes that have been introduced and a new comprehensive Ultra 4K Tool Box User Guide giving full details of the facilities offered.