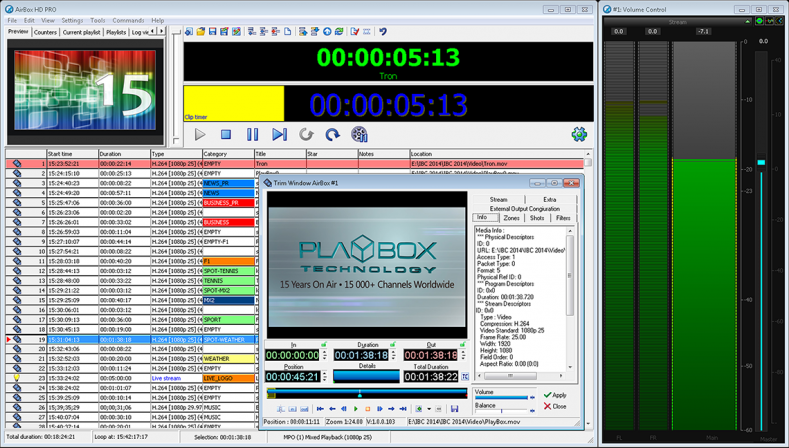 The user interface for PlayBox's AirBox

PlayBox Technology has expanded the audio features of the AirBox broadcast playout system by adding Dolby Digital Plus and Dolby-E encoding and decoding capability. This is made possible through the implementation of the SurCode surround sound plug-in developed and produced by Minnetonka Audio Software.

Designed for playout and streaming, AirBox has offered Dolby Digital 5.1 for some time but the upgraded version now includes capability for up to 7.1 channels through Dolby Digital Plus as well as Dolby E for distributing up to eight audio channels, plus metadata and timecode, over two stereo channels.

"Dolby Digital has been an integral feature of AirBox for many years," says Don Ash, PlayBox Technology's managing partner and director of sales. "Large screen television displays are becoming increasingly popular among home television viewers, which in turn is creating strong interest in high-quality television sound. This demand will be further accelerated by the rapidly falling price of 4K home television receivers with internal upscalers. AirBox with SurCode for Dolby Digital Plus encoding and decoding enables broadcasters and playout facilities to deliver cinema-style 5.1-channel surround sound."