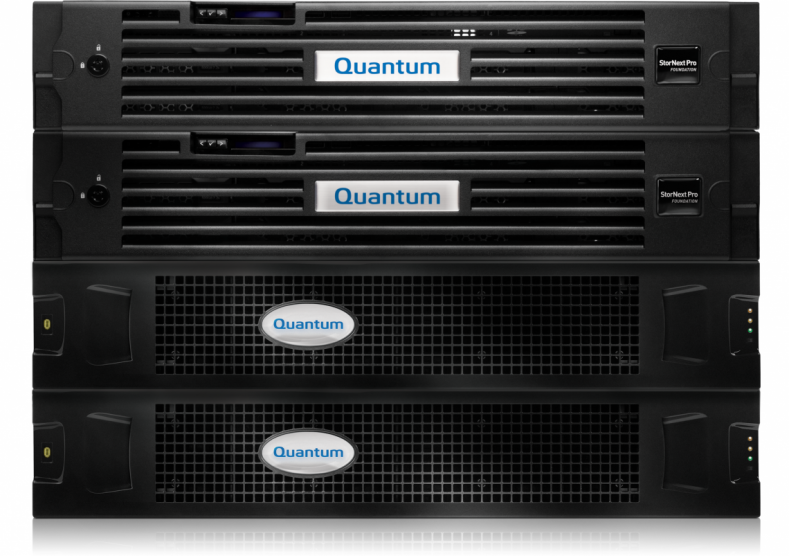 Among Quantum products at NAB is the new Q-Cloud Archive which extends Quantum StorNext workflow capabilities to the cloud. The company has a number of other new products and additoins in support of StorNext 5, its flagship workflow storage platform.

The Quantum Q-Cloud Archive is described as adding flexible, safe and secure off-site cloud archiving of valuable content to StorNext workflows. Users buy only the capacity they need and only as they need it, keeping assets archived long-term for re-monetisation or simply as an off-site asset pool.

The company also will highlight StorNext Connect, a new management and monitoring console developed for the StorNext platform with a new user interface that provides an at-a-glance dashboard of the entire StorNext environment.

Also on show are the new StorNext QXS-5600 high-capacity, high-density disk array. This is said to be ideal for work-in-process storage for a wide variety of applications including 4K and 8K production. It delivers enterprise-class performance, redundancy, availability and manageability. Providing up to 336TB of raw capacity in 4U — as much as twice the storage capacity per rack unit of smaller disk arrays — the StorNext QXS-5600 reduces the space, power and cooling required to support high-performance applications and introduces a new level of value within Quantum's disk offerings.

At NAB Quantum will further show extended online storage with the firm's Lattus Object Storage. This creates a parallel workflow for non real-time operations — such as ingest, transcode, rendering and delivery — by using IP connections to separate their network traffic from that of streaming real-time operations such as editing, color correction and audio sweetening.

StorNext 5, working with MAM and workflow production applications, can steer assets and content to Lattus to maximize workflow efficiency and prevent slowdowns and bottlenecks. Because of Lattus' object storage technology, longer-term content can be maintained safely and with greater durability than RAID, with nearly unlimited scalability. Once content is ready for long-term archive, it can be moved or copied to tape archives or Q-Cloud Archive in an automated fashion.

Refinements to StorNext 5 web services API layer and to the platform itself allows Quantum to claim it has eliminate interoperability problems between its workflows and third party components.

Quantum are at NAB Booth SL8416