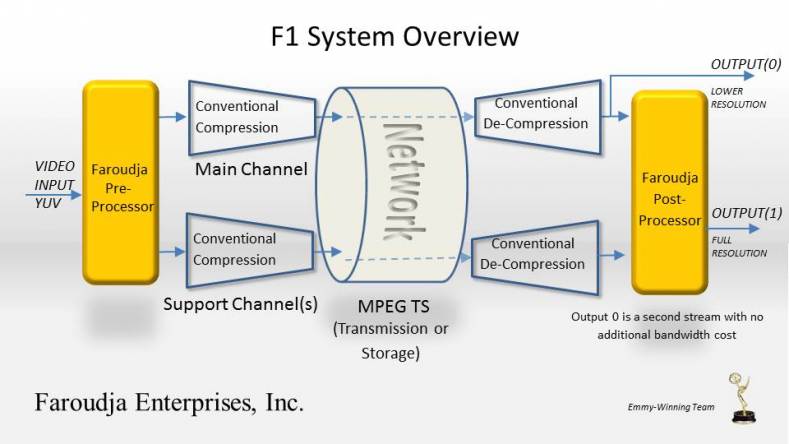 The F1 platform is claimed to boost existing compression technologies by up to 50% without reducing quality.

The demand for bandwidth is doubling every three years. Video is the biggest contributor to this growth. However, compression scheme efficiency doubles approximately every 10 years. Heading into NAB, US compression specialist Faroudja Enterprises claims to have made progress addressing this problem.

Faroudja claims that its encoder-independent F1 platform enhances existing compression technologies with up to 50% bandwidth savings without reducing quality.

It has been granted three more patents which improve F1’s video streaming and file compression efficiency for any conventional encoder (MPEG-2, MPEG-4, HEVC) without any codec modifications.

According to the developer, the F1 platform is designed to better manage today’s increasing demand for video and pave the way for 4K delivery — especially through bandwidth limited networks — as well as traditionally delivered media. F1 provides three benefits: the same quality at lower bitrates, enhanced quality at the same bitrate, and most recently, a combination of higher quality with lower bitrate.

Introduced at NAB2014, the F1 technology applies pre-and post-processing before and after compression to reduce video bitrates up to 50%. It is said to interoperate with all resolutions, frame rates, line structures, colour depths, dynamic ranges, and bitrates “operating efficiently on third-party compute-based encode platforms”.

F1 encoded streams can be played back on mobile devices including those with Android, iOS, and Windows Mobile operating systems in realtime and with minimal additional power draw to the device, the release stated.

The solution is aimed at content distribution networks, OTT services, cloud-based services, VOD and “wherever there is a critical need for managing large volumes of video data.”