Rarely does an X Games occur without one or two exciting, bleeding-edge live-production technologies popping up, and the recent Winter X Games in Aspen, CO was no exception. Headlined by the first-ever deployment of an FAA-approved drone for a live sports production on U.S. soil and the debut of GoPro's first foray into the live broadcast RF cameras, ESPN once again had a full bag of tricks on hand at Buttermilk Mountain.

“At X Games, we have an enormous advantage. Because this is a major event that is completely ours, we don’t have to go to another league or outside entity; the discussions about using new technologies are internal,” says ESPN SVP of Production Innovation Jed Drake. “That is why, over time, you have seen this technological exploration happen at X and succeed at X. It’s truly the working laboratory. What other entity was going to let us fly a drone during competition. X provides that platform for technological exploration and innovation.”

When the NFL moved the Pro Bowl from its annual home in Honolulu to Glendale, AZ, this year, it created a conundrum for NEP and ESPN. NEP’s EN1 Monday Night Football trucks, which were expected to once again serve as the home of ESPN’s X Games production, were needed by ESPN at the Pro Bowl. Despite the change of plans, NEP was able to come up with a hodgepodge solution to meet all parties’ needs. 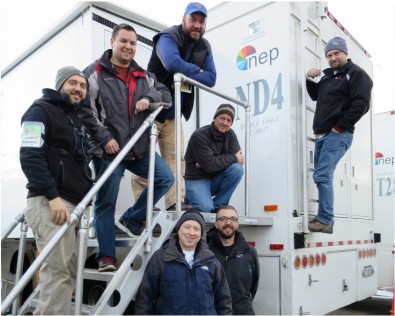 The BSI crew at this year's X-Games,

“This year, we had a conflict with Pro Bowl being the same week as X Games. EN1 does the entire Monday Night Football season, so that took the top priority for this week for that truck,” says NEP Supershooters Account Manager Michael Pean. “We wanted to come up with a solution for X Games to at least equal the real estate, as far as the working space within the trucks.”

SS22’s A unit was paired with ND4’s C unit to work Venue A because SS22’s B unit is a straight truck and ESPN required an expando to accommodate its large-production needs. SS22’s B unit was also onsite to serve as a utility unit for ESPN’s overflow.

“Sometimes, we have trucks available to come up with different combinations,” explains NEP Engineering Manager Nic Romano. “With golf not being in season right now, we have a wide variety of good trucks to choose from to make the best combination for the client, and we were able to do that with ESPN here.” 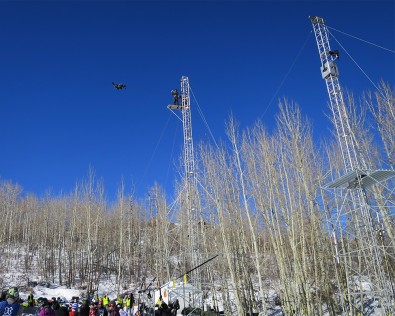 One of two Flycams ESPN deployed at Buttermilk Mountain.

In addition, NEP’s SS32 and ST32 served as the home of the Venue B production, and ST28 housed ESPN Event Productions videoboard shows. All six mobile units were packed into a tight footprint along with office trailers and BSI’s mobile unit, the truck compound having shrunk slightly because of upgrades made over the past year at Buttermilk Mountain.

“We had some great meetings with ESPN after [the SVG Summit in New York in December] to talk through what we all wanted to accomplish,” says Romano. “We went over the connectivity with these [mixed] trucks, this is how much we have, this is what we’re going to need to add to the trucks to make this work. And then we came up with an outline for the guys in the NEP shop, and they built it. If you have to add to the infrastructure of a truck, you have to plan for it. You can’t just show up onsite and say, Okay, we’re going to do this.”

Among the custom solutions NEP provided for ESPN were several fiber kits built specifically for the needs of each venue at Buttermilk. In addition, NEP’s The Wall iPad, which enables fast and easy configuration of complex monitor walls, was deployed. Also used was an end-of-show rundown, which NEP has provided for NFL on Fox, that indicates how many times each camera was taken, allowing a director to review and use the data plan for future shows.

“The customization of coming up with the real, the ideal solution for the show — that is what we’re really proud of,” says Pean. “We are always working on those types of things to try and better our client’s experience and the show in general.”

BSI Manages RF All Over the Mountain

In addition to the Vortex Aerial drone and GoPro-Vislink

RF camera systems, ESPN deployed more than 50 cameras throughout the venue, including an army of Sony HDC1500s (in various hard and handheld configurations) and a variety of specialty camera systems.

“We’re covering more of the mountain than we ever have before,” says BSI EIC Eric Pfeiffer. “We put a site up at the very top of the X course, and one at the bottom to allow them to do interviews and audio heads. 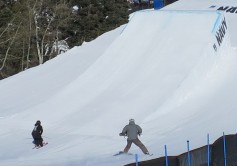 The FollowCam has become a staple of ESPN's X Games coverage.

BSI provided linked transmitters for three FollowCams (camera rigs that allow operators to capture a unique moving shot from right behind the athlete), a Steadicam (with a Sony HDCP1), two Flycams, and four handhelds, along with the receive infrastructure for the new GoPro-Vislink live HD RF cameras, which were debuting.

On the audio side, BSI delivered nearly 30 wireless mics, including 16 parabola mics, seven Blue Steel MIC1500 wireless units with integrated on-air and talkback functionality, and a snowmobile helmet mic and “Madonna” mic for talent, both with MIC1500 beltpacks.

For communications, BSI supplied ESPN and ESPN Event Productions 15 PL intercoms (including one for the Vortex Aerial drone team) and 11 IFB intercoms.

BSI brought along its digital return-video system, in which a single transmitter in the truck sent the signal to as many receive points as necessary throughout Buttermilk Mountain. Via a miniature receiver on the RF camera, an operator could see return video on the viewfinder to help in framing shots. BSI also fed the return video to monitors so that talent could view the program feed while announcing.

“It basically just allows the producers to feed the talent whatever they want, seamlessly,” says Pfeiffer. “Which is a huge advantage for them.” 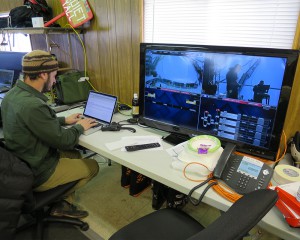 Chris Cokas, manager, SIG X Games, ESPN Emerging Technology said “We do all adjusting wirelessly, so we can control everything with our phone instead of going up there and [physically] mounting and adjusting, which is nice for us.”

Fletcher Sports provided two NAC Hi-Motion II ultra-slo-mo camera systems (switching among hard, handheld, and jib configurations) and nine robotic cameras, which were repositioned in 13 locations during the week-long event’s various competitions. Three of the robos were outfitted with longer, 40X lenses, while five of them served as booth cameras: two Venue A announce booths, two Venue B announce booths, and the athletes lounge.

“At this event, more than almost any other, the robos give more coverage in spots that you can’t easily access with scaffolding and manned cameras,” says Fletcher Lead Technician Nick Serna. “It changes your perspective and adds a really cool element. This year, we have a robo 70 ft. in the air; you just can’t put somebody that high on the mountain. And we have an overhead shot over one of the curves on X Course; [it] adds to the whole new feel of the show.”

Among the other vendors on hand were MUSCO lighting it all up, VER renting out all kinds of equipment (from fiber solutions to lenses and more), Vortex Aerial’s drones, GoPro and Vislink’s live mini RF cams, and an army of Sony HDC cameras.