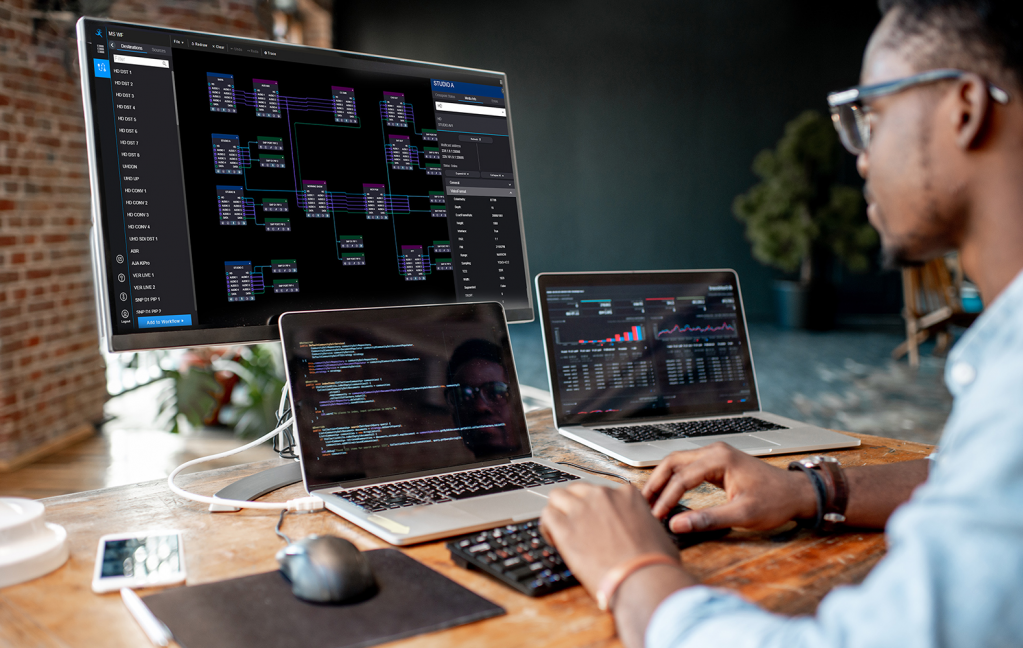 Since 2018, Imagine’s VP of Networking Solutions Architecture, Cassidy Phillips, has been designing and deploying SMPTE ST 2110 systems. These projects range from large broadcast hubs to flypacks and distance-learning systems, supporting everything from farmers markets to the biggest half-time shows on earth.

Here, Cassidy shares this experience to offer a behind-the-scenes look at how ST 2110 infrastructure has exceeded the capabilities of SDI to simplify production workflows and expedite show setups.

Replicating The Old With The New

I’ve spent the better part of five years explaining how to replicate familiar SDI workflows with uncompressed SMPTE ST 2110. Even for those of us who are itching to move our production to a COTS-based SMPTE ST 2110 IP infrastructure, we want to know that our operations staff will have no problems adapting to the new technology. More than 30 successful deployments later, I believe that SMPTE ST 2110 solutions have proven capable of matching — and even exceeding — the SDI performance operations teams have come to expect.

Need a little more convincing? More recently, the electrical efficiency of a neatly planned SMPTE ST 2110 system has become a hot topic (or “cool,” if you will pardon the joke). At a high-level: the improved density of packetized data over fiber allows us to streamline our equipment lists versus the legacy SDI parade of converters, amplifiers, and demux/mux boxes. This reduction of equipment not only means fewer points of failure and fewer things to maintain, but also delivers efficiencies that beget sustainability.

And those efficiencies can be carried over into operational workflows as well.

An interesting thing happens when your media streams are no longer limited to a 3G, 12G or MADI cable tied to a series of crosspoints. The COTS IP switch infrastructure is really a fabric of high-bandwidth bidirectional links to a nonblocking core. Many systems today utilize 100Gx100G links to cores capable of hosting over 700x700 UHD video streams per rack unit. Where the fully produced output of my SDI system was something like “1x Video, 16x Audio, …Ancillary Data,” the fully produced output of my ST 2110 system can be almost anything — limited only by available bandwidth:

This is where a software-defined routing system is critical. If your router control system still thinks within the limits of SDI, you may be able to replicate an SDI production — but you will not have the keys to unlocking 2110 workflows.

As an example, many of the most active live production systems are perpetually dealing with diverse mixes of audio and video. The media handed to the facility is inconsistent, and each receiver of content may have unique format requests. If my router control system allows me to define and group things without worrying about the limitations of SDI, I can make some complex problems go away…

The audio world has been dealing in IP for many years — well before the ratification of SMPTE ST 2110 (AES67 is the reference for SMPTE ST-2110-30). Depending on the needs of your production, or the limitations of your equipment, audio can be packed into multicast in a wide variety of ways.

This ST 2110 system illustrated in Figure 2 handles HD video, 16 levels of mono audio, a couple levels of stereo, a level of 5.1, a level of 7.1, and a few ST 2110-40 ancillary data levels. Everything is timed together and moves together as needed. A “Destination > Source > Take” action can tell the receiving device to lock to the entire group of multicasts, or just the sub-set that is relevant, such as a stereo recording device locking to a stereo stream and ignoring the mono streams. The distinction of “levels” helps prevent bad routes, such as an AES67 receiver trying to lock to a UHD video stream.

Even if all equipment in the system is fully compliant, professional live events venues and studios handle a variety of audio configurations for different handoffs or records. Sometimes a destination (or client) requires mono, sometimes stereo, or even bundles of four channels or eight channels within the same multicast stream. The SDI solution to this problem is to place a lot of physical devices in each workflow — splitting things up — and major changes to a configuration would require local edits on each device, or the physical addition of new DeMux/Mux nodes.

A COTS IP core allows all varieties of audio streams to coexist in the same fabric and be routable, beyond the 16-audio-channels-per-video limits of SDI. For example, I can route “Program 1” to “Record 1” and ‘Truck 1,” and my routing control system will perform a full route of all levels related to Program 1. But Record 1 might lock to all audio levels, while Truck 1 only grabs a few.

Most systems have a house format for audio production, and in SDI, they gateway everything at the edges to be correct. But the busiest of production facilities have so many unique types of events and partners that they want all audio configurations in the fabric at all times — ready at their fingertips. Thankfully in IP, audio isn’t super-high bandwidth, so it’s not hard to host and move a few extra audio streams. If a new production request requires more planning, the team can whiteboard together and update the routing control database within minutes.

Make It Up As You Go

Planning is key to a smooth-running system. But here again, ST 2110 comes out ahead. A true software-defined ST 2110 router can be reprogrammed on the fly — much more easily than a legacy SDI cross-point. Expansion is only limited by bandwidth, so if there’s a sudden call for a 5.1 audio level, all you need are a few megabits and a few minutes with the database.

The flexibility of ST 2110 has already been exploited, with “board show” arena systems suddenly doubling as television master control and sending programming to fans at home. As a former Master Control operator, I know how an in-house production and a national telecast impose different kinds of stress on a production team and infrastructure. But ST 2110 can topple obstacles that were brick walls in SDI.

Virtual routing means we can build complex, but operator-friendly workflows. “Destination>Source >Take” can execute a sophisticated route without using a salvo or multiple steps. The ST 2110 system also ensures each destination only locks to the media it needs. This helps us do most things on the fly, while protecting us from bad routes — and ties up fewer devices than SDI would.

My insider tip: Whiteboard the workflows you need, and then build virtual workflows in your software-defined network orchestration system. Virtual re-entries and virtual workflows can be used to build custom groupings of audio and video for handoffs to other systems. As discussed, audio is usually the most complicated piece, so there may be a lot of audio levels in the system and virtual re-entries for grouping them with video. Virtual re-entries can also be used to split video when, for example, you need to send one video to the arena bowl and another to the broadcast or a recorder. 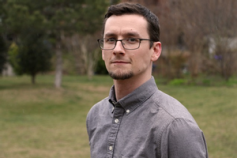 The software-defined system, in combination with a COTS core, offers a ton of flexibility. It can simultaneously host parallel workflows on the same fabric, or dramatically change database configurations for workflows via one-button preset changes. Production staff can choose the best solution for your show and the technology is ready either way.

For those who are still yet to dip their toes into IP, take a moment to consider a world without the limitations of the SDI “wire.” And for those already in the deep end of the ST 2110 pool — join me as we seek to challenge the limits of IP!