The sound of Billions, the television drama series about power and wealth in the world of high finance, is, in many ways, the sound of silence.

According to re-recording mixer, sound editor and sound designer Eric Hirsch, the mission of the Billions sound editorial and mix teams, who are based at Goldcrest Post in New York City, centers on a simple question. “What is the sound of nothing?” he says. “And how do we make it sound like nothing, but sound good?”

The answer? “It’s a rich palette of various unobtrusive things,” Hirsch says. “And every once in a while, there will be a sequence where it's a little bit more of a whiz-bang moment.”

Billions, which premiered on Showtime at the beginning of 2016, features a large ensemble cast led by Damian Lewis as a hedge fund manager whose moneymaking methods attract the attention of a U.S. Attorney played by Paul Giamatti. The series is loosely based on several real-life federal financial crime investigations.

Advances in post production technologies and budgetary constraints have long since slimmed sound teams down to the essentials. On a show such as this, says supervising sound editor and re-recording mixer Gregg Swiatlowski, there is a supervisor that handles ADR and the client-facing tasks. “Then, we’ll have a dialogue editor and an effects editor. Occasionally there’s a Foley editor, but sometimes that gets wrapped into some other role, like the effects editor, or the assistant gets bumped up,” he says, or the supervisors might cover that with an assistant.

“The mix team often ends up being a supervisor and an Eric,” says Swiatlowski, referring to Hirsch’s multitasking abilities. He and Hirsch won Emmy Awards for their sound editing contributions to Netflix’s The Queen’s Gambit in 2021. Hirsch additionally won for sound mixing. 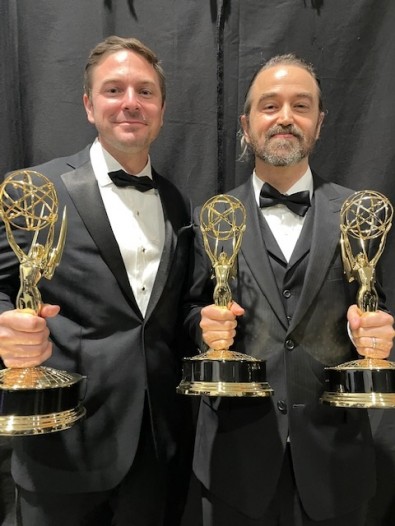 Wall Street types value their peace and quiet, it seems. The Goldcrest team, together with the creators of Billions — Brian Koppelman, David Levien and Andrew Ross Sorkin — plus executive producer Mike Harrop and showrunner/executive producer Beth Schacter, agreed on some basic sound design rules almost from the beginning. “Nobody’s got a phone; there's no such thing as a ringtone in this show. And you can’t hear anything from the other side of the office doors,” Swiatlowski says.

“These traders make a lot of money, and they can invest a lot of money into their offices,” he continues. “So, anytime you're in an office and the door closes, no sound is getting through. But the moment the door opens, we can hear some stuff. That makes it easy for us to prepare what the showrunners are going to want to hear in a scene and what they're not going to want to hear.”

Billions is a very talky show, so the focus is always on the dialogue, whatever else is going on in the background. “So it's about somehow managing to take anything that would interfere with the dialogue and mixing it in a fashion that you can hear it, but it doesn't compete,” Swiatlowski says. The show is mixed in 5.1, although there has been some discussion about Dolby Atmos for the future, he says.

Since many scenes take place in quiet, glass-walled offices, you might imagine that the production mixer would be challenged by reflections. “We have very controlled spaces. They do a lot of work on putting blankets over the glass, so it's not super reflective,” Swiatlowski reports. “And they will sometimes put a blanket above the actor to minimize the amount of pinging around.”

There are also plenty of scenes outside of the brokerage houses on the show, a number of them filmed in Manhattan, where the environment can’t be controlled. But very little looping is done, per the wishes of the showrunners, who would rather have noisier production dialogue than record ADR. “There are probably only 20 cues, at most, in an episode. We do as little looping as possible,” he says.

That said, there are times when ADR is needed: “Mostly it's just adding lines or fixing a story. If we can just squeeze in a word or syllable to fix up a moment, we'll do that.”

Having worked on all six seasons over the show’s seven-year run (earlier this year, Showtime renewed Billions for a seventh season), Hirsch has some go-to processing that he routinely applies as soon as he receives the tracks. “We do as little as possible and rely on iZotope RX and various combinations of plug-ins, EQ and mixing to get the production to work one way or another,” he says.

When working on the dialogue tracks, he says, “I'll take a clip into iZotope and then just use a little bit of a lot of different modules. I rely very heavily on Spectral De-noise and run the whole track through it at first — a pretty light application — to get a sound to it. Then, I use a light application of Voice De-noise and then a light application of Dialogue Isolate. I'll use those in conjunction with the Waves WNS plug-in. All these things I try to use minimally, but in conjunction with one another, so that they're not necessarily sounding like themselves.” 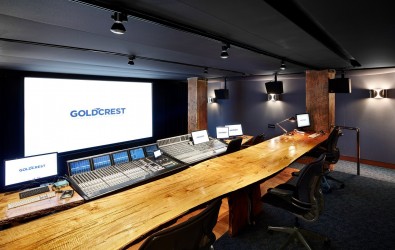 Digging in further to get the sound that he wants, Hirsch continues, “I'll also use the FabFilter Pro-Q 3; that’s a big one for me. I use that as a kind of multiband gate. I’ve found that to be fairly effective for noise reduction. And again, I don’t use it too heavily, so it doesn’t sound artificial. Because it's really easy for a layperson to hear something and say, ‘That sounds weird.’”

Beyond that initial processing, Hirsch says, he has some other starting points saved in his DAW. “Both for the backgrounds and the dialogue, the mics that they use have a certain kind of a sound to them. There's a starting-point EQ that I'll use that gets a couple of the frequencies that I'm not crazy about out.”

Goldcrest Post’s New York facility features three mix stages, says Hirsch, two of them equipped with Avid S6 consoles. There is also an ADR stage that can accommodate a loop group plus a premix room.

Because the show is so dialogue-driven, the production is willing to work with the location sound mixer, Swiatlowski reveals. “There's a bit of freedom on set for the sound mixer to stand up and say, ‘We need to do this a different way in order to make it sound good.’”

In wide shots there is generally no unobtrusive way to use a boom mic, of course. “But there are occasions when, if the camera’s locked off and not moving, they'll shoot a slate for 10 seconds,” he says. “Then they can mask out the top of the frame so the boom can slide into the shot during the take.”

The production is also happy with the sound of lavalier mics versus shotguns or large diaphragm mics. “There are tools like Auto-Align Post, so that you don't phase with the boom. You can push the lavs and they sound a bit more natural when you put them in conjunction with the boom. It’s very helpful for matching when you go to those extreme wide shots,” Swiatlowski says.

There is a lot of music in Billions. “The showrunners, particularly Brian Koppelman, have very specific tastes about needle drops, and they make liberal use of them,” Swiatlowski says. Indeed, the needle drops — previously produced songs not written for the score — have taken on a life of their own, spawning Spotify playlists of tracks by the likes of U2, Fun Lovin’ Criminals and Sly & the Family Stone as well as indie rock favorites from the Replacements, Pylon and Pixies that have featured on the show over the years.

“There are a lot of cues with very, very, very short spaces in between,” he continues. “Also, the score, by Brendan Angelides [also known as Eskmo], is just everywhere. It’s kind of aethereal, but that contributes something to the emotional nature of the scene.”

Much like the sound design, Hirsch says, the music should generally be subliminal. “It's not quite the sound of nothing, but it is sort of the same idea. You don't ever want to be thinking about it, but you want to be propelled by it.”

Their job is to make the words shine and have everything else support that, Swiatlowski stresses. But of course, when the script takes the action outside of the office environment, the Goldcrest crew can have a little fun. “Then we can get a little bit more creative with our ambiences and the things you hear.”

“One thing I found interesting is that there's the dialnorm level that we have to get to,” Hirsch says. “A lot of the time, people are having these very intense, whispered conversations. So we monitor at 77 dBSPL, a really low level, because we have to just crank the mix in order to get up to where it needs to be. And because there's so little other sound, the dialogue has to be really loud. That's been an interesting thing to figure out.”

Unlike network television, where the post production teams are typically working on the next episode during the previous week on a primetime drama, a premium outlet like Showtime has a little more flexibility. “We can start working pretty far out from the release dates,” Swiatlowski says. “We're moving on to season seven, so I would say it's a relatively well-oiled machine now.”