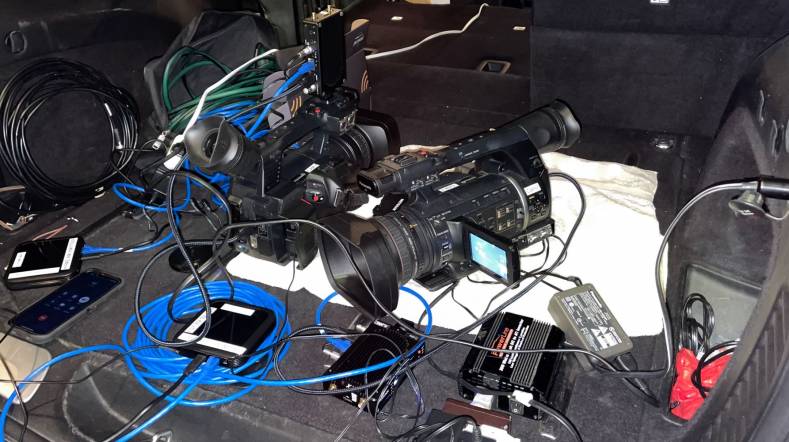 Several 4G LTE modems in the trunk of a SUV were tested with cameras simultaneously streaming to different IPs with video different modems.

Less-is-more is one of the secrets of live remote production and 5G promises less. The less gear needed on location, the less there is to pack up, carry up, set up, power up, and hope it all works. A reliable and robust internet connection is always essential, even when a microwave van or satellite truck is used for content backhaul.

Cell coverage, provider bandwidth, streaming video compression algorithms, and new technologies have improved significantly since then. One of the most exciting and talked about new cellular trends is 5G - the fifth generation of cellular technology. Today, most broadcast TV bonded cellular manufacturers offer some systems that include 5G. If you’re shopping for new bonded cellular gear, check what 5G bands it can work in, learn what 5G services are available in your market, compare the costs and data plans of 5G to 4G LTE, and determine where local 5G towers are located.

Amid a wave of 5G marketing, hyperbole, and controversy, providers are working hard to expand 5G coverage in high user density neighborhoods. 5G is nearly always considered a premium service which costs users more than 4G LTE. It makes good business sense for providers to roll out 5G in high density high rise urban areas. For example, approximately 4000 new ‘Jumbo’ antennas on giant monopoles were proposed in 2021 for New York City streets in 25 different zip codes. Today, installations are underway, despite residents complaining about the tightly spaced new antennas, and the social media debate fuelled by a small but very vocal minority who believe the claims of possible health concerns. The short range and expensive new 5G cell towers and millimeter wave gear doesn't make business sense for rural users or small towns. The FCC recently recommended more fiber to bring high-speed internet to people living in the country because a new 5G wireless infrastructure is too expensive to primarily cover pastures and woods.

Several cellular providers also offer 'Private 5G' service for licensed users. As part of the overall 5G specification, Private 5G enables the purchase of licenses for selected frequency bands, which means no congestion and much more reliable performance. This approach is used by some broadcast wireless contribution vendors within some systems. It is more costly but provides the kind of reliability required for high profile events.

A less costly alternative to private 5G within the USA is AT&T FirstNet. It is a 4G LTE based national wireless platform for first responders and the extended public safety community, with a dedicated core for priority routing of FirstNet traffic. Licensed broadcasters qualify for FirstNet. Verizon offers a somewhat similar first responder program called Verizon Frontline.

5G is an umbrella term, literally covering a wide spectrum of RF bands from 30 MHz to 300 GHz. 5G uses millimeter waves called FR2 in 5G terminology, for additional capacity and higher throughputs. 5G FR2 includes several bands between 24 GHz to 71 GHz and is where the seriously high-speed 5G action is. Most of today’s more commonly available 5G activity is in the “sub-6 GHz” spectrum. Bandwidth of sub-6 GHz 5G signals is about the same as 4G LTE, consisting of 20 MHz segments than can be bonded together for increased bandwidth like Wi-Fi. H.265 compressed 1080p needs about 3 Mb/s bandwidth, compared to H.264 which needs about 6Mb/s for the same content. Some of the newer 5G towers such those going into New York City also include millimeter wave services.

Signals below 6 GHz can penetrate a residential wall or a few tree branches and leaves, but only signals below about 800 MHz (formerly US TV Channel 69) are at a frequency low enough to penetrate walls and provide full coverage at a significant range. This is one reason the FCC abandoned TV Channels 70-83 in 1983. A Channel 69 TV signal requires a great deal more tower height and 1000 KW ERP to replicate the market coverage of a 45KW ERP Channel 2 signal at 60MHz. Propagation robustness diminishes rapidly in bands above UHF (1GHz). The fundamental problem with 5G is the limited range of millimeter waves. Millimeter waves provide amazing bandwidth but don’t travel well. For instance, a mobile user getting 2Gb/s download speed outdoors may get only 2Mb/s when they step into a nearby building.

Frequencies from 30GHz to 300 GHz are also known as millimeter waves because their wavelengths range from 1-10mm. Digital reception bandwidth depends on a high carrier-to-noise ratio (CNR) for low bit error rates. The only way to increase and maintain high CNR at millimeter wavelengths is with more cell sites with more powerrful antennas, spaced much closer together than the typical spacing of 4G LTE and sub-6GHz 5G sites.

Millimeter waves are attenuated by the atmosphere and the moisture in it starting at about 10GHz, and the curve rises significantly from there. At 60GHz, atmospheric oxygen absorbs 98% of the transmitted energy at approximately 16dB/KM, although atmospheric attenuation drops to about 1dB/KM at 100 GHz. Millimeter waves work well in outer space and are often used for satellite-to-satellite communications.

5G millimeter wave tests on Earth indicate usable high-speed digital signals can travel about 500 meters, but they don’t penetrate obstructions. The good news is that the short range can significantly reduce interference. The bad news is that millimeter 5G service will be primarily in high-density cities.

The most exciting part about the 5G promise is bandwidth. Verizon’s 5G Ultra Wideband uses the 28 and 39 GHz millimeter bands to provide low latency 4Gb/s service, and is available only in small portions of 55 cities. Verizon uses C-band to bridge low-band 5G nationwide and 5G Ultra Wideband performance. Even after the millimeter 5G build-out is complete, only users very close to 5G sites will get the wide bandwidth that millimeter 5G bands can provide. In theory, 5G can be 200x faster than 4G LTE. In theory, 4G LTE can provide up to 100Mb/s. In reality, maximum 4G LTE speeds generally run at about 35Mb/s. Today’s sub-6GHz 5G service is not significantly faster. Most people expecting 5G miracles when the 5G icon pops up on their mobile device will probably not notice a difference until millimeter cellular coverage grows exponentially. 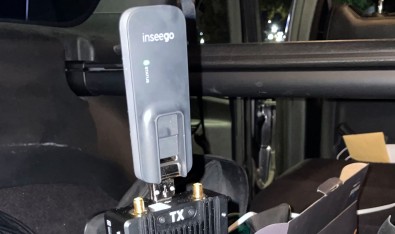 This 4G LTE Inseego modem from ATT was rock solid at one location and pixelated at another. Bonded cellular would have been better.

Today, 4G LTE is nearly ubiquitous in the US, adequate for HDTV transport, and there are a wide variety of 4G LTE video solutions for nearly every budget. 5G is beginning to crawl and walk, and more consumer products supporting it are promised and beginning to appear. Some 4G LTE and 5G consumer and professional devices can be loaded with multiple USB cell cards and typically switch between the cards seeking the best service. Service switching in this way is not cellular bonding. Most of the early, affordable consumer 5G modems are typically designed to stream only one IP source.

The world of 4G LTE mobile modems has matured, and many modems include routers that can stream from multiple IPs. Most can also be set to a static IP which typically costs extra, but it makes it infinitely easier to discover and access your gear over the internet.

Not all 4G LTE mobile modems are the same. The production team I work with recently purchased a new T-Mobile 4G LTE modem. It worked great back at HQ but not when we tried to use it in the field. The modem video froze or pixelated about 10 seconds every two minutes, then came back on. Turns out the modem was not designed to be moved once it logs on from your home. T-Mobile tech support explained it was trying to log on every two minutes, and they kindly gave us a refund.

One of the strongest segments driving the wireless modem market is RVs. People touring and living in RVs want TV and high-speed internet service like everyone else, and 4G LTE can provide it with the mobility they want and need. Broadcasters and live streaming productions can take advantage of the many modems on the market today, combine it with a couple of USB cards from different providers, and let the unit decide which provider’s signal is optimum. Some professional encoders include built-in USB modem connections.

Most non-bonded cellular modems are clearly less expensive, but are they worth the risk? My experience indicates bonded is much more robust than non-bonded, and you pay for it. Which is best for your situation depends on what you consider acceptable and what your budget will allow.