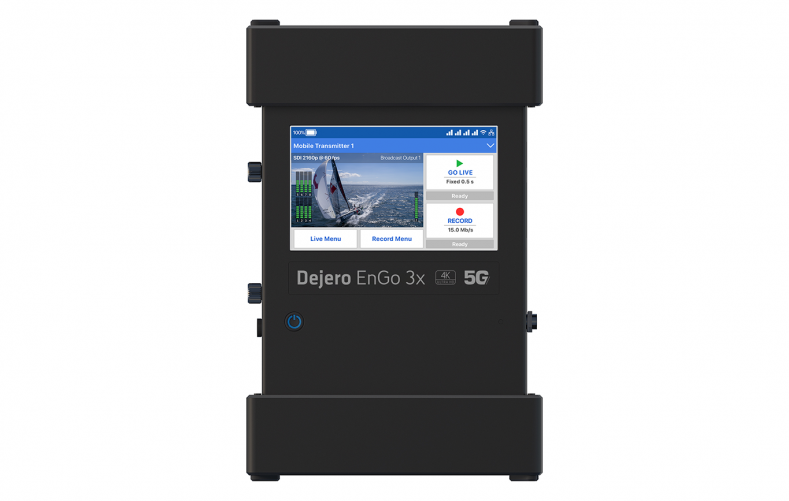 The new EnGo 3x 5G transmitter provides reliable 4K UHD video transmission and multi-camera production in the field; and the new WayPoint 3 receiver decodes HEVC or AVC, outputting in resolutions of up to 4K UHD.

Dejero will introduce its new EnGo 3 and EnGo 3x 5G mobile transmitters with integrated internet gateway at IBC 2022, along with its new WayPoint 3 receiver.

Dejero selected modems that support a broad range of cellular bands to enhance 5G performance of the EnGo 3 and EnGo 3x, supporting additional bands used by carriers in the US, Canada, Australia, China, Korea, and Latin America that other 5G mobile transmitters simply cannot connect to.

EnGo 3x
EnGo 3x boasts multi-camera support for up to four fully frame-synced HD feeds. Perfect for capturing feeds from multiple cameras in a single unit, EnGo 3x reduces the cost and complexity of multi-camera sports and live event productions. The additional camera inputs can be licensed when needed, for ultimate flexibility.

The ability to transmit in 4K UHD with eight audio channels delivers unparalleled video quality at extremely low latencies. With more sports and major live event viewers willing to pay a premium to watch in the highest definition possible, Dejero anticipates this will quickly become a sought after feature for sports and live event productions. Furthermore, 4K UHD live feeds can greatly benefit film, television and commercial productions to make it easier for distributed teams that are not located on set to monitor and detect lighting and color balance issues in real-time. This is paramount for avoiding expensive reshoots. The 4K UHD feature does not require a separate licence, unlike competing solutions.

EnGo 3
EnGo 3 is designed for newsgathering in locations where 5G networks have been widely deployed, As with the EnGo 3x, it reliably transports broadcast-quality live video from remote locations whilst also providing resilient, high-bandwidth internet access, all in a single device. With glass-to-glass latency as low as half a second over bonded cellular connections, it also delivers greater security with AES 256 encryption, a security-hardened Linux OS and a cryptoprocessor to authenticate the hardware.

The 5G networks bonded by EnGo 3 and EnGo 3x transmitters can be combined with other wireless networks including Wi-Fi and GEO/MEO/LEO satellite, and fixed line (cable/DSL/fiber) wired networks thanks to Dejero’s award-winning Smart Blending Technology. This technology intelligently manages the fluctuating bandwidth, packet loss, and latency differences of the individual connections in real-time, providing enhanced reliability, expanded coverage and greater bandwidth.