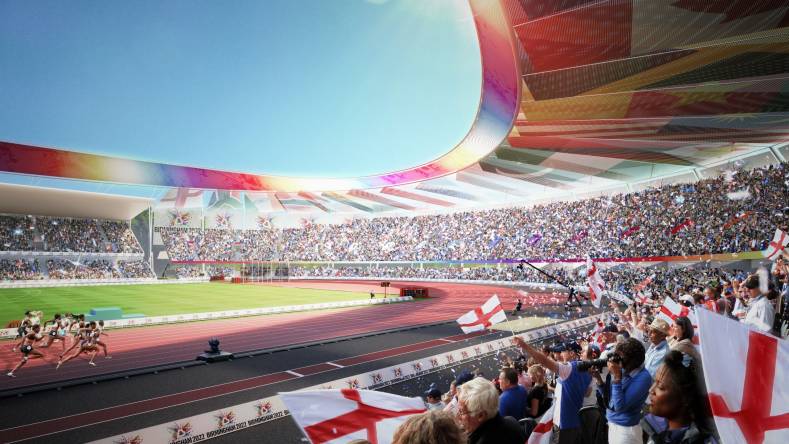 Birmingham 2022 will be the biggest sports event in the UK since London 2012.

The 2022 Commonwealth Games will be the biggest sports event on UK shores since London 2012 with around 1.5 billion global audience expected to watch over the 11 day event beginning July 28. Bidding for the host broadcast contract began in summer of 2019 with the award announced for Sunset + Vine in April 2020. Here’s what S+V plan with a special focus on one of its OB partners, Gravity Media.

“The bidding process is really the start of planning for the event,” explains David Tippett, Managing Director, Sunset + Vine. “During 2021 we shifted from planning to delivery. All the plans we had at the outset are still essentially the same. Our approach is to build-in flexibility and adaptation.”

S+V has the advantage when it comes to this project of having seen the uncertainties around the pandemic come and go. Surprisingly perhaps, given the recent drive to remote live, all production of the host broadcast will be on site in largely conventional OB.

“Everything is very traditional,” says Mark Dennis, Director of Technical Operations, S+V. “Sports will be switched in the trucks on site for the basic world feed which comes back to the IBC for onward distribution.”

There are a number of reasons for this. Firstly, planning began pre-Covid. Secondly the economies of scale that usually work in favor of remote producing a series of matches for one sport don’t necessarily work with multiple different events to produce. The Commonwealth Games Federation doesn’t own a remote production facility and the venues themselves lack the connectivity required to route dozens of feeds back to a central hub. In addition, the UK is blessed with OB facility providers and with no need to fly any additional crew or facilities in, it simply made sense to use the resources at hand.

Timeline are the IBC service provider. Other OBs are from NEP, Cloudbass, Gravity Media and the EMG group (including CTV, Telegenic, Eurolink, Broadcast RF and ASC). Hawk-eye is supplying kit for sports adjudication.

More than 370 cameras will be deployed across 19 different sports and 22 OBs, with the additional trucks needed for events like road cycling and time trials. Live coverage alone will tally 1500 hours with additional material including a best of games channel and a highlights package for clipping taking the total production output to 3300 hours. Some 34 feeds will be switched at the IBC (some sports like badminton and table tennis have two games playing simultaneously and require two separate feeds) with 22 the maximum number of feeds required at peak.

It is a far smaller scale event than an Olympics and requires the host to cut its cloth accordingly. The phrase used to describe this is ‘right sized’.

“We were always tasked with coming up with a right sized host for the Commonwealth Games – something that makes it sustainable and secures its long-term future,” Tippett says.

That’s about being relevant to generations not bred on the concept of the Commonwealth and for which an inaugural Esports championships is being piloted with separate branding, medals and organisation. It also means addressing the soaring costs of hosting such an event.

The Commonwealth Games Federation claim that the £967m spent on the Gold Coast 2018 delivered a £1.3bn boost to the Queensland economy while also saying of Birmingham’s £778m budget that “an important element is the significant decrease in direct Games delivery costs compared to Gold Coast." The 2026 event is in Melbourne (the Victoria CWG).

“The honest truth is that we won’t have the bells and whistles of an Olympics, or the level of specialist cameras or 3D animated replays,” Tippett says. “It will have really high quality, well directed and well produced broadcast coverage which will stack up against any world championship.

“We’re not saying ‘look at these new innovations’. Sometimes host broadcasts are a numbers game where there’s this demand to increase the number of cameras or specialist coverage from the previous event.”

Broadcast tests have been staged at Alexander Stadium in Perry Barr and at Sandwell home of the aquatic events. The Alex test was actually a Diamond League athletics event broadcast on 21 May for which S+V was the producer.

Birmingham’s famous NEC is home to the OB compound for trucks producing all sports (the boxing, table tennis, badminton, netball etc). The NEC is also home to the IBC including the host broadcast with MCR and logging area, and EVS server system as well as space for major rights holders like the BBC and Channel 7 Australia.

What has changed, accelerated by Covid, is that more rights holders want to cover the games from a distance, sending fewer crew and facilities to venues.

“This is the first CWG in a truly remote world,” says Tippett. “Pre-Tokyo 2020, the concept for every multi-sport event was that the RHBs are responsible for their own distribution of feeds from the event IBC. The new world means that is not as clear cut any more so we have looked at being more involved in that distribution to suit downstream workflows.

“We’ve made a basic package of feeds available as streams as opposed to broadcast circuits. Lower rez streams are being distributed by the organising committee themselves for use via IPTV around Birmingham or for individual federations to access and analysts to watch performances.

“It is down to the host to ensure that rights holder needs are catered for. This includes producing more content than ever before for broadcasters to tailor coverage as well as making it all accessible to remote production.

“We’ve had lots of discussion about connectivity and distribution of feeds whether live, delayed or on-demand,” Tippett adds. “There’s huge complexity. One broadcaster might want to produce using one remote model and another will have a different version. It’s finding the common ground that works for everybody based on how technology has changed.” 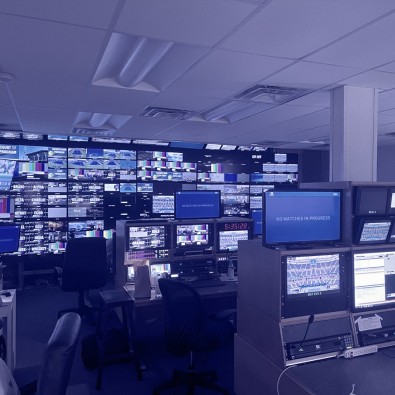 Formerly the site of Birmingham’s Wholesale Markets, Smithfield will be the home of the Basketball 3x3 and Beach Volleyball competitions during the Games, expected to seat 2,500 and 4,000 spectators respectively.

Gravity Media are tasked with designing, supplying and operating the OB for these events which run in parallel.

“The idea for our tech solution is to service both events separately – treating them as two independent OBs,” explains Andrew Goodman, Project account manager, who is overseeing the technical build.

Gravity runs a flypack operation for all its events, giving it the ability to quickly scale as required. Here, two flypacks are built each containing the following:

Each is outfitted for 12 cameras including Sony HDCU-2500s and a HDCU-4300 supports for slo-motion. There are 3 x EVS on each event with a fourth on the basketball for video adjudication.

Audio mixing is on Lawo mc² 36 consoles with Lawo A__mic 8 as the interface boxes to bring audio back from the commentary and field of play and also standup positions.

Gravity Media has developed a system that allows them to connect field cameras over single SMPTE cable back to a Field Box. They call it SCAMPI. Cameras are connected over 1x singlemode fibre cable with the SCAMPI Truck Box in the Compound, where it interacts with RCPs and Controllers.

“This is essentially a way to transit video, data and power for multicams down one single cable. The signal is broken out in the box at the OB compound for the router and for iris, color control and any pan tilt and focus control via multi-cam shading control CyanView RCP.

“The reasons we’re using this transit system is because on the Basketball we need to mount a mini-cam behind the basketball board to look through to the net. We’re using a second system on the beach volley,” Goodman says. 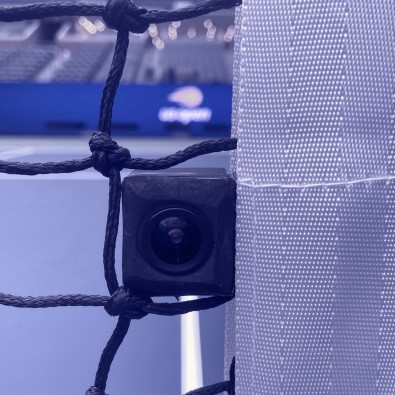 The camera connected to SCAMPI on the Beach Volleyball is a Dreamchip ATOM one SSM500, a high-speed camera that can be operated in standalone or in EVS modes with iris and PTZF control over a CyanView network. In standalone mode, replay and trigger is done via Stream Deck or shuttle connected to the RCP. Replays are then stored in the camera's internal storage. In EVS mode (as here) the RCP acts as a bridge between the EVS system and the camera. It can playback at 500fps and has a 50fps output for cutting into the programme.

The second reason is that Gravity have been asked by S+V to provide a red indication light for the Beach Volleyball umpire to tell them when the host production is showing a replay. The umpire can restart the match when the light goes off.

“Because the OB compound is 350m of cable away from the field of play the signal needed to go over fibre. Usually, you’d take a GPO from the cable from the vision mixer but our development engineer was able to find a way to use the Cyanview across Scampi to trigger the GPO from the Scampi box and create a small circuit to power the light on and off meaning the signal can be transported over fibre.”

Graphics, as across the entire Games, is by Swiss Timing. 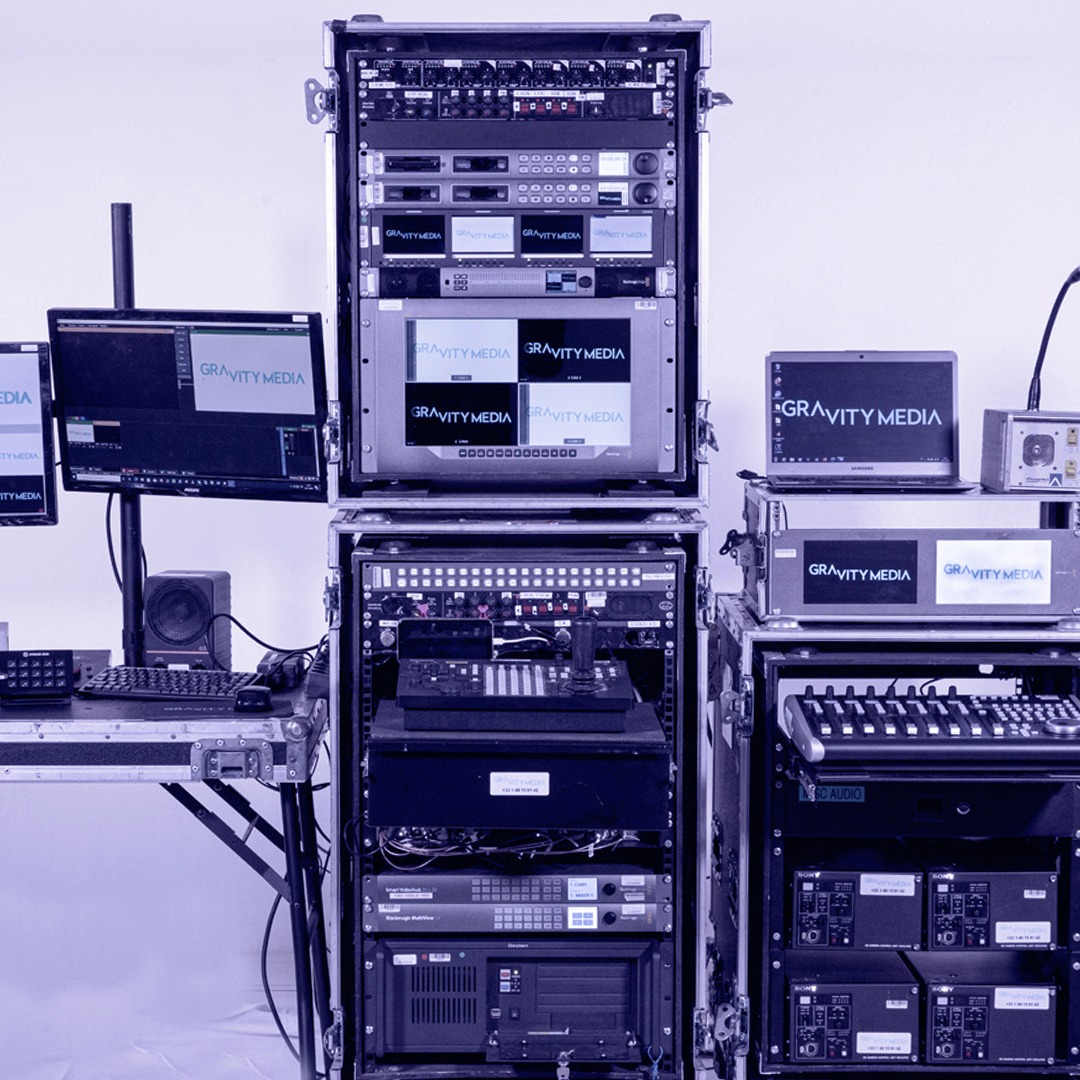 “Our flypacks are designed to accommodate 12 camera OBs so that means I take a template of that flypack and adapt it to the production need,” Goodman says.

The flypack racks are wired ready to go so I can just configure it as required.”

For instance, its OB for the 2021 I’m A Celebrity Get Me Out of Here was a 124 camera solution. For the US Open, another contract, the build is even bigger.

“It’s similar to a truck solution except that our kit arrives in boxes and housed in portacabins.”

In this case, eight portacabins arrived on site on 21 June before technical rig and rehearsals. Gravity itself is sending 12 crew, split between the two events.