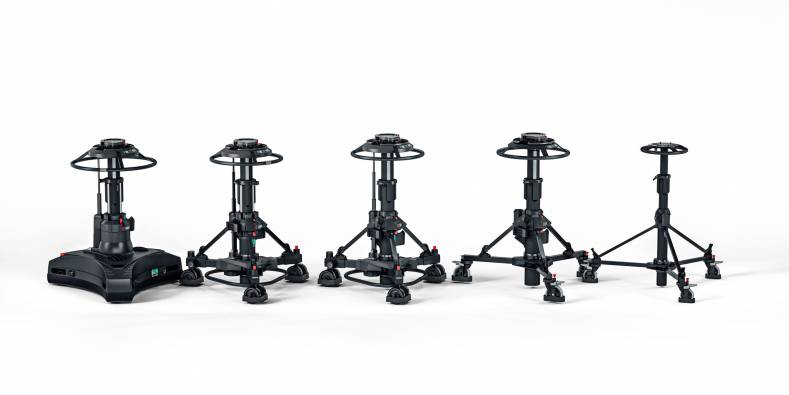 Five pedestals in the Osprey range support maximum payloads from 35kg to 80kg.

Vinten, a manufacturer of manual and robotic camera support systems, has launched its new Osprey pedestal series — a range of two-stage pedestals designed for camera operators to effortlessly move and precisely frame the on-screen image, placing viewers ‘in the action’.

Five models make up the range, Osprey Lite, Osprey Plus, Osprey Plus S, Osprey Elite S and Osprey Studio S. Through consultation with studio and outside broadcast camera operators, Vinten has evolved the industry’s most widely used 2-stage pedestal. Osprey delivers precision balance and effortless movement. Cameras and prompters can be positioned with ease with a range of wheel options, full remote crab and steer modes or the ability to run on tracks while multiple accessories allow for attachment of a variety of heads. Osprey pedestals fold into two lightweight parts for easy transportation.

Anthropomorphic studies by Vinten engineers were used to define the height range of the pedestals and make them comfortable for operators to use. When combined with prompter mounting hardware and Vinten fluid heads, the on-shot stroke of pedestals can match the eyeline of on-screen presenters from the lowest height percentile to the highest, or from seated to standing. The pedestals are carefully balanced to compensate the effect of gravity with controls positioned to reduce strain on the body when operating for long periods of time.

The Osprey series will support a wide range of cameras, prompters, and accessories, from the smallest Osprey Lite model with its payload capacity of 35kg, to the largest model, Osprey Studio S capable of supporting 80kg.