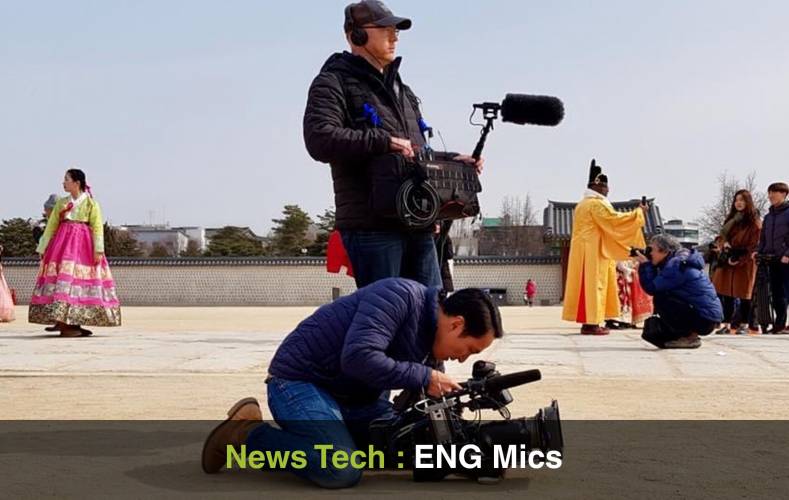 “Because I’m based in Houston, along the Gulf Coast, we cover a lot of hurricanes,” says Randy Foster, a Texas-based audio engineer and commercial sUAS (small unmanned aircraft system, or drone) pilot for NBC Network News Field Ops. “You’re dealing with high winds, salt air, a lot of water; it’s quite a challenge.”

The network has largely standardized on the Sennheiser MKE 2 lavalier microphone, Foster reports, both in the field and in-studio. He also carries lav mics from Sanken and Tram. “Sennheiser is my go-to; I’m going to use it nine times out of 10.” But for a sit-down interview for a news magazine type of show, he says, “I’ll go to my Sanken COS-11 lavs, because those hide better.”

Foster has a few tricks up his sleeve for keeping the lav elements safe and dry when he’s in the field and battling the weather. “We try to bury them as much as possible and protect them behind clothing. But they can’t be so buried that the sound gets ‘dark.’ Not only that, you don’t want to isolate things so much to where there’s no wind noise. The viewer needs to understand the power of what’s happening around us.”

Sometimes, he adds, there is simply no way to protect the microphone: “We sacrifice lavs on the regular.”

For vox pop interviews, Foster reaches for a broadcast industry workhorse, the Electro-Voice RE50B. The handheld mic is a descendent of the 635A, which has been seen on camera since 1965. “They put that capsule in the RE50, shock-mounted it and added an internal windscreen. It’s a great microphone; we use it all the time in news,” he says. “It’s an omni-directional dynamic so it’s great for man-on-the-street interviews.” Because that pickup pattern is forgiving, he says, “Correspondents don’t have to be perfect and get the mic right in front of everybody.”

In high-noise environments, he continues, “Instead of using the RE50 we use the Sennheiser MD 46, which is a nice cardioid dynamic microphone. It sounds amazing. As long as the correspondent has it in front of their subject’s mouth it works perfectly. But if you get off a little bit, you are going to lose them, because it’s a cardioid.” 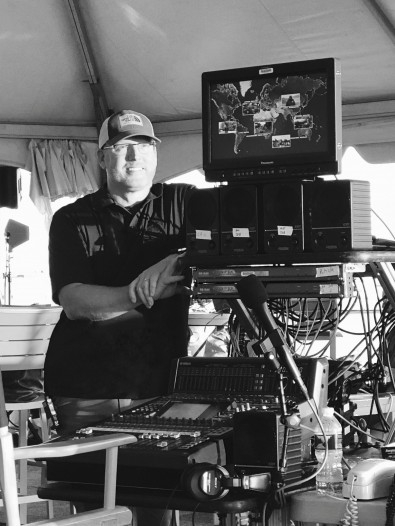 Foster was on location in Washington, DC, in 2019 covering the latest in political news with MSNBC's "All In With Chris Hayes." Image courtesy Randy Foster.

While Sennheiser’s “Mickey-Two” lavs are in common use, Foster’s colleagues tend to use different boom mics according to personal preference, he reports. Years ago, he typically used a Sennheiser short shotgun in situations where he was not able to place a lav mic, either an MKH 416, another industry staple, or an MKH 60. “About 10 years ago I switched over to Sanken shotguns. I use the Sanken CS-3e as my primary shotgun.” In smaller spaces, he says, he uses the company’s CS-M1 short shotgun.

As for RF gear, the network relies on Sennheiser transmitters and receivers in its studios, Foster says, and Lectrosonics RF gear in the field with its staff crews. The company also recently acquired some Wisycom equipment that has been racked-up for use in political conventions, debates and similar events, he says.

During extreme weather shoots, “We’ll wrap the transmitters in baggies and seal them shut, then put them in someone’s pocket and close the flap. We try and keep those as isolated as possible,” he says.

A few years ago, Lectrosonics started making silicone covers for its transmitters, he continues. “They’re form-fitted; perfect. A lot of times, when we can’t use a lav because the winds are just too crazy, we’ll switch to a handheld and use that with a plug-on transmitter like the HM or HMa. Lectrosonics also makes great covers for those transmitters, so those can be out in the elements and they’re not going to get ruined.”

Some audio engineers working on Broadway and other environments where moisture may be an issue frequently favor a lower-cost alternative, but not Foster. “Some guys use condoms, but I’ve never been a fan. I go with a bigger foam windscreen; that does a pretty good job of keeping water off the mic element. The correspondent will use the microphone for the live shots then I’ll take that microphone, put it in a towel and squeeze it out, to make sure I get rid of any residual water out of the windscreen.”

A typical ENG crew for day-to-day news coverage includes a producer, a correspondent and a camera person in addition to Foster. Limited budgets may mean that a crew will roll with fewer people, he says, with the camera person handling sound and, sometimes, the producer working remotely, as might be more typical with a local broadcaster. 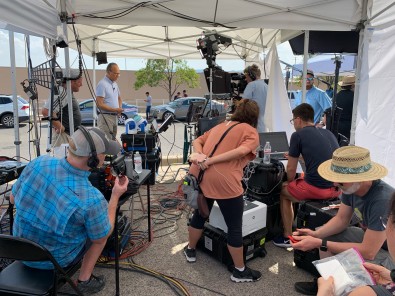 Foster at the site of the mass shooting in El Paso, Texas, in 2019 for "NBC Nightly News with Lester Holt." Image courtesy Randy Foster.

A video clip that went viral this winter when a car slid on ice into Tori Yorgey, a reporter for WSAZ in West Virginia, revealed that she was doing everything: audio, video, lighting, the works. “When we were in Beijing a couple of weeks ago for the Olympics, we saw a lot of one-man-band operations,” Foster reports. “These small affiliates would send one person, and they were shooting their own live shots.”

For larger ENG crews, the job of the field audio engineer has become a little more elaborate over the past couple of decades, Foster says, not least because there may be more cameras involved now. “Where you typically used to shoot an interview with one camera before, now they want three. So it’s the same fundamentals, just amplified across multiple cameras.”

Instead of having just one or two microphones and a small three-channel mixer, he continues, “Now I’m carrying a small recording studio over my shoulder. I’m recording multitrack files. I’ve got iso’s [individual tracks] of all the microphones. I’m doing a stereo mix, sending to multiple camera platforms. I’m sending transcript files. So things have grown.”

Foster sends his audio to the camera — or multiple cameras — wirelessly. “My stereo mix is always being transmitted to the camera,” he says. That audio, embedded with the video, is typically transmitted by the camera person to the studio using a LiveU bonded cellular device and is also recorded into the camera.

“But you want to make sure you have another version of it. Redundancy is key,” says Foster, who always records a copy. “I make it a practice that if somebody is speaking, I’m recording into my mixer. I’m rolling broadcast quality WAV files. You can always choose not to use it, but it’s hard to go back and redo it. I’m also rolling on transcription-quality files, so I have both available.” That way, he says, he can send a file to the producer so that he or she can begin writing the story. “It’s an easy file format to email. If it’s a longer interview they may want to send it to a transcription service.”

One new challenge in today’s multi-camera workflow is that one of those cameras will often be on a gimbal, Foster says. “So you have to get audio to a DSLR on a gimbal. That was a challenge for a while. We were taking a Lectrosonics slot receiver, like we would use on one of our big cameras, putting that on a battery in a pack and running a cable to the camera, to try to get that same audio into a DSLR.”

Things became easier when Australian manufacturer Rode introduced its GO and then two-channel GO II wireless receivers. The tiny self-powered device fits on the DSLR hot shoe and connects to the audio input via a 3.5mm jack. “All the NBC audio teams have been issued with those,” Foster reports. 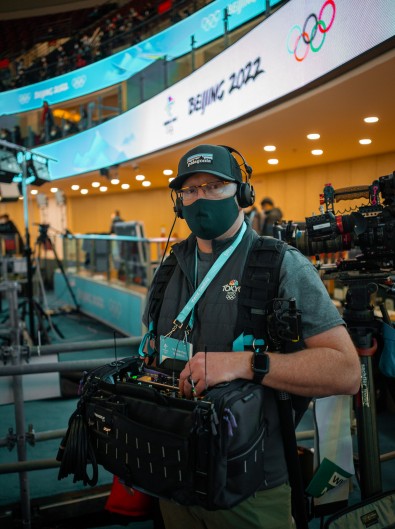 The receiver proved to be a godsend at the recent Beijing Olympics, he says. “My cameraman loves to shoot off of his Ronin gimbal with his Sony A7 camera. He’s known for how beautifully he shoots off a gimbal. He wanted to run around with that camera as his primary, so I had to get audio into that camera. So for most everything I was doing at the Olympics, I had all this expensive gear, thousands and thousands of dollars slung over my shoulder, and it was all passing through a $300 Rode GO II as the last link in the chain.”

The inexpensive device operates using 2.4GHz Wi-Fi over distances up to 200m, according to the manufacturer. For redundancy, because of the RF environment, Foster made sure to record everything, he says. “Some of those Olympic venues were pushing Wi-Fi all over the place. If need be, we could take it and resync later, before we transmitted, but we didn’t have to do that — it worked perfectly.”

In general, he says, the radio frequency environment is probably his biggest challenge these days. “The FCC [Federal Communications Commission] has taken away more and more space so RF coordination has become harder and harder. It’s gotten super congested. When I talk to my colleagues, that’s always an issue. So guys who are savvy with radio mics have become more valuable.”