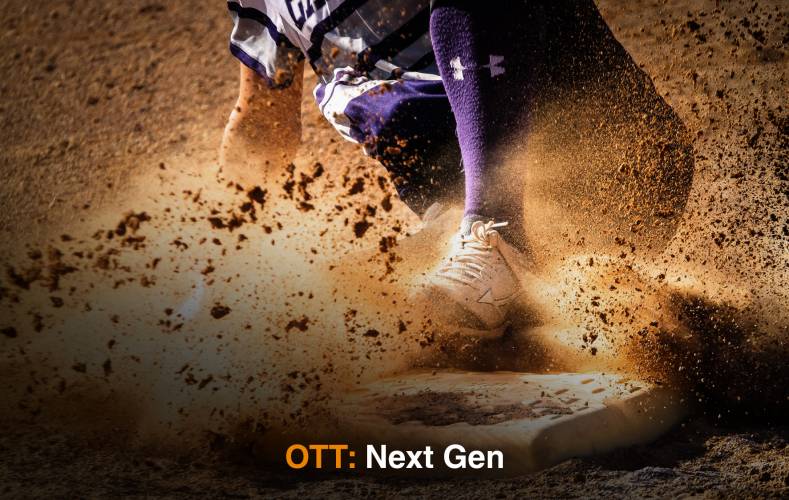 With the ongoing growth of OTT content consumption, and the drive from broadcasters to provide high-scale Direct to Consumer OTT services, market requirements now demand streaming services that operate at the scale and quality of existing broadcast services.

For over a decade of streaming, “good enough” has generally been good enough. However, the stakes are rising quickly for multiple reasons: live sports are being delivered exclusively on streaming platforms, 4K and UHD TVs are being purchased and connected to the internet at a fast pace, and consumer habits are shifting to focus on OTT services on the big-screen. These collectively place new pressures on video delivery infrastructure.

The World of OTT series looked in detail at all aspects of the technology used in the delivery of OTT services. The series highlighted innovations in video processing that help D2C services continue to deliver content efficiently and cost-effectively such as JIT encoding, sophisticated ad insertion platforms, and content personalisation. The series also looked at key areas of the value chain that must scale as demand grows such as ISP networks, IXP platforms, CDNs and Storage. The clear challenge that emerged from the series was how to deliver the content at the expected quality level from a consumer perspective, as overall demand grows. The outlooks from media companies and technology suppliers show that achieving quality while continuously scaling is the major challenge for the years ahead.

We can think of this next phase in D2C streaming maturity as the “broadcast-grade” era. In other words, the era in which we deliver high quality content (especially live content) consistently to everyone that wants it. The OTT journey started out with VOD services, but now we move into large live audiences which bring a seismic shift in the demands on our existing networks.

This series of “Broadcaster D2C” articles considers this subject from the perspective of the D2C Streamer and considers new business propositions that are emerging inside the existing broadcaster service provider and streaming technology supplier domains.

Technically, traditional CDNs were developed for file transfers rather than live video which was good for VOD delivery but left gaps for live video delivery. In addition, ISP networks are multi-purpose and data-centric, not purpose built for video delivery at scale. And operational planning and capacity management that supports the uninterrupted flow of video from the camera to the consumer is far more complex in streaming delivery than on the legacy closed and dedicated networks that exist for terrestrial television, cable television and IPTV. Overall, as video quality levels increase and as audiences grow, technical delivery issues become visible.

Operationally, D2C streaming is still a relatively new and small business for broadcasters. It is easy to forget that this direct engagement with consumers is not what broadcasters have done in the past. But this is an important paradigm shift that the broadcaster’s business and operations teams must manage. Importantly, broadcasters are live-centric – sports, news, and live programming are the big-ticket items for broadcasters to deliver. Anyone who has ever worked in a live linear playout environment (as I have) knows this at their core. And in D2C streaming, live video delivery needs special attention, particularly as audience sizes grow, because networks are multi-tenanted and multi-use and not purpose-built for live video. We need the traditional broadcast quality assurance disciplines in place to underpin streaming at scale.

Commercially, D2C streaming from broadcasters needs very high bandwidth for millions of viewers for short durations, while the ongoing growth of VOD consumption means that there is a high level of daily bandwidth consumption. Introducing ultra-low latency, higher resolutions like 4K, and catering for a growing Smart TV installed base all contribute towards making it more difficult for OTT services to achieve broadcast-grade standards.

A new model is needed.

Current D2C delivery networks typically include one or more Content Delivery Networks (CDNs). The D2C streamer contracts with the CDNs for their “super-highway” to the ISP networks, assuring that at least this part of the delivery path is managed. While video is a high percentage of their total traffic, CDNs typically support all forms of internet delivery including static files, streaming video, streaming audio, website content, and more. As a rule, these D2C delivery networks are multi-tenanted and multi-purpose, and management of video streams tends to stop at the peering point with the ISP, which could well be in an Internet Exchange location and not even inside the ISP network itself.

The Video Delivery Network model is focused exclusively on broadcasters that need to deliver high-quality, high-bandwidth video with economies of scale. Broadcasters, and other large video streaming businesses, have a specific set of characteristics that need special attention. They consume a disproportionate amount of network bandwidth, and require a particularly high level of network performance, and yet may not have the sorts of budgets to match, for example, high-speed financial trading businesses.

The Video Delivery Network therefore looks at how to make video delivery highly efficient. This is not only a CDN challenge, but it is also an ISP challenge. ISP networks are expensive to build, maintain and to upgrade. If the annual network management budget of a large ISP was an independent business, it would easily be large enough to make the Fortune 500 listings. And when video consumes that ISP network capacity, and requires that capacity to be expanded, the answer is not easy. The long-term answer involves significant expansion projects in core networks and access networks (see the BT Openreach article). But video consumption over the internet is expanding faster than the general internet can keep up. And unless other use cases – like financial services, security services, medical services, etc. – require this sort of bandwidth to the home, then it is media & entertainment that is pushing this network expansion alone. Given the budgets of the M&E industry, this does not enable ISPs to implement large-scale expansion plans.

So, the efficient and expedient position for broadcasters is to use the new Video Delivery Network model that can be tactically and precisely deployed to support the growth of D2C streaming services. The win-win between broadcasters and ISPs is that this helps broadcasters grow their D2C business quickly and ISPs do not have to invest in large-scale capacity expansions purely for this use case. 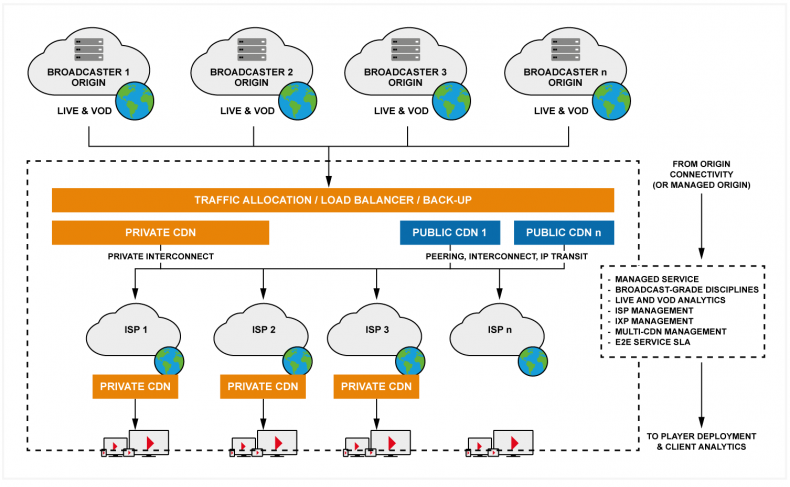 The Video Delivery Network is a multi-CDN environment that can be partially deployed deep inside ISP networks for best proximity to the end consumer, but can also be deployed in strategic peering points to reach the highest possible percentage of the population. The exact deployment architecture can be adjusted according to the economic realities and technical capabilities of each situation. At the core of the multi-CDN environment is a private CDN that is the daily workhorse for delivering a high percentage of daily content, whether it is Live or VOD. Depending on the traffic patterns it is feasible that the private CDN could carry 100% of the normal daily peak at prime-time. The private CDN is capacity dedicated to the broadcasters, highly utilised and therefore financially leveraged by the routine streaming from multiple large broadcasters. It provides streaming economies of scale. It also provides a method to partner closely with ISPs to deploy streaming servers with well-understood traffic patterns and usage throughout ISP networks. By moving the streaming capacity to the edge of the ISP networks, demand and pressure is released from the peering points and core networks in place today. It makes commercial sense to do this for the businesses that are already consuming disproportionately high quantities of bandwidth, and that will only get worse as more consumers stream more content, for longer periods, and at higher bitrates.

Supplementing the private CDN needs to be one or more public CDNs. The public CDN offers pay-as-you-use capacity for peaks of demand that do not make economic sense for the private CDN to support. We often talk about not building for peak usage when this can leave capacity idle and cost more than necessary. So in the Video Delivery Network we think about the high daily peaks for normal prime-time audiences, as well as the special event peaks – the big sports events, the once a year live events, and the breaking news stories - when the audience can be much higher than the normal peak. In effect it is when the majority of the population are tuned in to the same program on the same channel at the same time. In normal streaming terms this breaks any private CDN capacity that has been set up for a single large broadcaster. The public CDN platforms can offer flexibility for these variable events. They can also offer a back-up solution in disaster-recovery situations.

Because we are in a continuous, multi-year growth mode for Broadcaster D2C streaming services, it is expected that streaming capacity will need to be added year after year to support the growth. Data from major streaming events today suggests that we are probably at about 10-15% of maximum expected normal audience sizes versus where we expect to end up 5-10 years from now, depending on the country. At that point the most advanced deployments should have reached “audience scale” where a significant majority of the population will stream all of their content rather than rely on satellite or terrestrial networks – perhaps this will be something like 80-90% of the population who have access to high bandwidth data connections. We may not have reached “network capacity scale” because resolutions, screen sizes, device types and bit-rates will continue to evolve (think HD to 4K to virtual reality), which will mean even if 80% of the population streams as their only way of consuming content, a doubling (or more) of network capacity may still be required to accommodate evolutions in content formats.

It is therefore essential to consider how the big streamers will strategically develop their Video Delivery Networks in the future, working very closely with CDN technology partners and ISPs to ensure broadcast-grade quality video can make its way successfully to every end consumer.