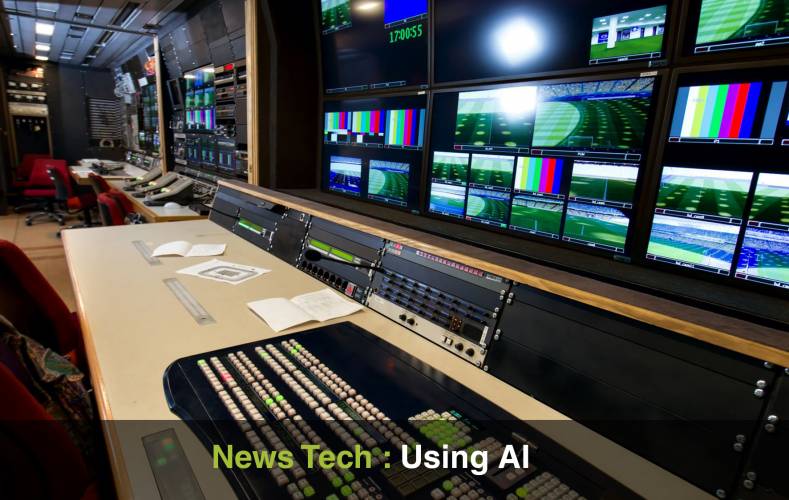 Everyone is trying to do more with less and the newsroom is no different. Automation offers significant benefits, including the ability to quickly make changes and adapt technically to things like work from home and remote production. But to what extent is AI taking over the newsroom?

The latest version of the BBC's automatic live subtitling software was recently shown to have some major defects - such as getting the spelling of proper names wrong, Head of News Neil Reid was previously embarrassed when, as Controller of Current Affairs, BBC News coverage of the Syrian crisis used a a photo of Sting’s wife Trudie Styler instead of Asma al-Assad.

These incidents in the BBC’s Broadcast Centre parody W1A (see series 3 ep3 and series 1 ep3) are funny because we know they cleave close to the bone. Some insider knowledge perhaps illustrating what can go wrong when automation is out of control.

“Automation is principally about cost-saving and speed,” says Trevor Francis, Grass Valley's business development manager who trained as an engineer at the BBC some four decades ago and spent 17 years at ITN, managing the news editing team and helping digitise its newsroom among other roles.

“When I was at ITN, the chief of news had a row of TV screens in their office displaying CNN, Sky News, BBC, AlJazeera and so on. And when a story broke of course they wanted to make sure ITN was first with it as often as possible. That’s just as true today for breaking news to social but the same process of quality control, verification of sources and reliability needs to be enacted.” 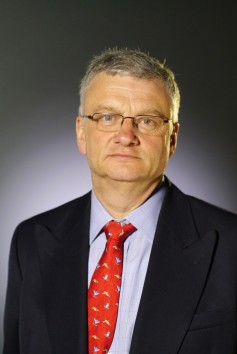 A classic use case would be automating the new clips to play out in exact sequence with Big Ben’s ‘bongs’ at the start of the 10 O’Clock News. “You want to automate the right video clips in the right place with frame accurate split-second consistency so the show opened perfectly and you couldn’t do this by relying on lots of people triggering replay devices and operating DVEs and mixers.”

That automated output hasn’t gone away. If anything, the need to produce eye-catching TV presentations has got more important.

“Good automation will ensure a consistent look-and-feel for a show, enable a more elaborate production than might otherwise be possible with the resources available, and help to minimise errors,” says Neil Hutchins, CEO at aQ Broadcast. “And, in these times, it will provide seamless support for remote or distributed production teams.”

Automated production systems have been expanded as a result to improve security in more distributed environments through cloud, virtualization, or working from home. The latest version of Ross’ OverDrive for instance, was primarily based around securing all the platforms, UIs, and communication required to work in those environments.

“It’s all about sophistication and speed,” says Mike Paquin, Product Manager, Ross Video. “Automated production systems provide directors and producers with the ability to choreograph complex opening sequences and storytelling devices to present a flawless, engaging segment. Things that would have needed to be pre-taped or edited in the past can now be done live every day with as little as one person to execute. This has also freed up more time for editors and creative people to focus on additional content.”

Everyone is trying to do more with less. Automation offers significant benefits, including the ability to quickly make changes and adapt technically to things like work from home and remote production.

"It enables production teams to improve their creative output with new graphics and set designs that include elements like LED screens,” says Paquin. “Automation makes it easy to adapt to new OTT outputs or fast-developing news stories – and allows for quick and efficient changes in the heat of the moment.”

“Additionally, news broadcasters now want to get content onto social media as quickly as possible,” says Francis. “Perhaps a piece of news is government embargoed or the story needs to appear on Facebook the split second after the last frame comes off air.” 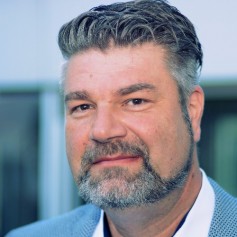 What has changed to enable this is that automation has expanded back down the chain to encompass postproduction and multi-platform publishing.

“Most major news broadcasters have a review process so that before a story goes live on Facebook a senior journalist would review the finished edit,” says Francis. “Once they give the ‘ok’, a single button press will automatically transcode the clip, bundle it with metadata and send to the CMS or directly to playout and to various online and social platforms.”

The mechanics of the automated process include creating a version of the story/file acceptable in technical terms to each platform.

“Automating content production to provide wider access to content, but at lower costs, will be the biggest benefit,” believes Michael Pfitzner, vp, Newsroom Solutions, CGI. “Broadcasters are now dividing their various content outputs between different publishing channels. The earlier approach, which was to produce once and then publish everywhere, did not work out as expected. Audience centricity is key as we head into 2022, as channels have distinct needs.”

Publicly funded broadcasters in particular tend to have operations built with teams of people and often different sets of infrastructure to feed social media and web platforms and other outlets. It’s a workflow architecture that is not sustainable.

“Ideally, news broadcasters want the producers and editor in their newsroom to create a piece of content for repurposing on any platform including radio at the touch of a button,” Francis insists.

“News automation is a key tool to enabling leaner production of consistently high-quality content,” says Ulrich Voigt – VP Product Management, Vizrt. “Producers, Directors, and other production staff don’t need in-depth device knowledge, so they are able to perform complex operations flawlessly, quickly, and consistently and are able to focus on the creation of exceptional stories."

This is increasingly possible thanks to AI-driven tools like speech to text engines, subtitling, facial detection and others. This is making searching and locating media content in newsrooms much easier and, given AI’s increasing role in generating metadata regarding content, this is a virtuous circle.

“In production, AI supports scanning and tracking of material, identifying locations and faces in videos, transcribes audio and much more, to ease the daily journalistic routine,” says Pfitzner. “AI is also helping to diversify content automatically, e.g., specific regional topics that can be created based on simple inputs like sports and weather.”

The use of AI is extending to detection of deepfakes. “Given the increasing polarisation in global politics, the use of deepfakes to stir up controversy is increasing. As these are created by AI, it stands to reason that the tools to detect them should also be AI-driven.” 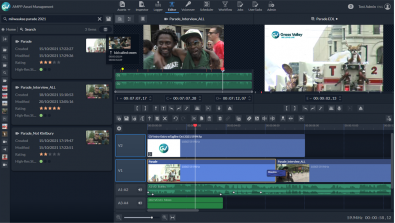 Even without AI, automated tools to help check the veracity of material is vital. “Credibility remains a core value for broadcasters,” Pfitzner says. “News organisations face an increasing struggle to maintain credibility and public trust amidst an avalanche of misinformation. This is especially true when it comes to publicly funded broadcasters, who are under increasing political pressures.”

Other AI tools can quick-assemble a package of clips and audio from internal and external sources to cut the time it takes a journalist to research elements of a story complete with authentication. AI-editing tools can also assemble a complete video package or write an entire story, though even here fact checking and verification before publishing would be in everyone’s interest.

“AI will have a role in helping directors and producers improve the speed of pre-production and quality assurance during a show,” says Paquin. “This can be done with motion tracking for robotics, video analysis that provides the director a warning to avoid jump cuts, and suggested camera shots or effects.”

Since AI tools deliver the best outcomes when trained on vast relevant data sets, most AI tools are likely to be found hooked into major cloud providers Google Cloud, Microsoft Azure or Amazon AWS in some way. It’s not the only reason news production is moving to the cloud, but it’s one of the cloud’s advantages to the operation alongside gaining benefits in OPEX models and the agility to pop-up special event news channels.

Here Is The AI-driven News

The evolution of AI-driven news automation is likely to be incremental rather than a quantum leap. “Even more flexibility will be needed to support a greater range of environments and workflows,” thinks Hutchins. “The automation should properly enable different scales of production within the same facility, from true, single-person operation up to a conventional news programme supported by a full technical team, whilst ensuring that each individual can work as efficiently as possible.

“And there should be allowance for multi-platform output, from traditional linear shows to on-demand piecemeal packages, to minimise the effort involved in repurposing content from one distribution mechanism to another.”

Voigt points to multi-platform adaptation to various screen sizes and aspect ratios as the next big innovation in news automation. 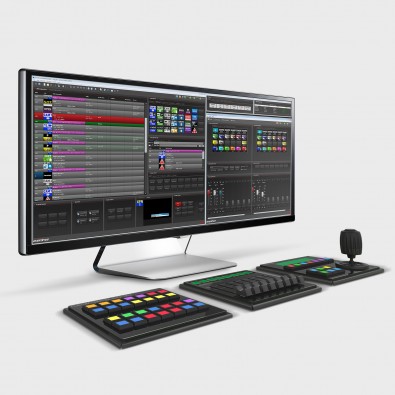 “For audiences, seeing content optimized to the screen they are viewing is becoming a need, not a want. Providing all audiences with news and content that is optimized for the device they are on creates more stories, better told for higher viewer engagement.”

Whether AI will drive people – editors, journalists, producers – out of the newsroom altogether seems highly unlikely.

“At least not in any recognisable form,” says Hutchins. “News programmes are living, breathing things – they reflect all aspects of their human creators, from the presenters, producers, editors, directors, production assistants, technicians and the rest of the creative team, to the owners and managers of the channel that they represent. The productions have a heart and a soul, which news automation helps to bring to life for the viewers. Even the smallest news bulletins require at least one person to create the linear production. At that scale, surely AI would not be viable or effective in any form, given that news automation already supports presenter-driven production?”

In any case, if AI was somehow generating news programmes without human intervention, then, by definition, news automation would not be required: the entire function of the automation is to act as an effective interface between people and technology.

“In that case, the AI-generated news would lack any of the natural characteristics of a traditional production,” says Hutchins. “Whilst we live in an era of high demand for instant, unique and compelling streamed content, at least conventional news programmes can appeal by being different.”

While AI is rapidly growing for many sectors of production, the idea of completely replacing human run news productions isn’t something Viz see coming to fruition either.

“We don’t predict a world where there isn’t at least one person overseeing a production to ensure a near-perfect broadcast,” says Voigt.

Eventually, AI might take over the world… but creative purists might have a say in that fight.