The Super Bowl LVI will be broadcast and streamed from Los Angeles’ SoFi Stadium on 15 February 2022. Courtesy KTTV.

“It’s great for all of us, the fact that we can have the two biggest events in all of sports in the Super Bowl and the Winter Olympics really on top of each other. It’s a great opportunity. And as I said to the team and as you and I have talked, if we can’t get excited for that, we are probably in the wrong business, so I think it’s fantastic.” NBC Sports Chairman, Pete Bevacqua.

The NBCU Winter Olympics and Super Bowl Preview Presentation began with Pete Bevacqua declaring “We are ready. We are prepared. We are prepared for the Super Bowl. It’s going to be in SoFi, as you know, which is an unbelievable stadium. I was lucky enough to be there in 2020 when it first opened and then again this season early in 2021, which was a different experience because there were spectators there.” He continued, “We are going to be simulstreaming this on Peacock for the first time ever. And we’ve had unbelievable success with Peacock and our NFL season so far. We are also going to be broadcasting the Super Bowl on Telemundo.” 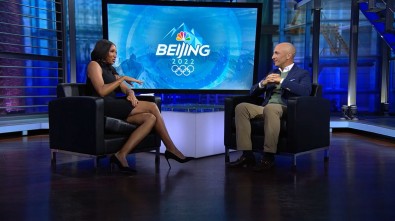 He continued, “Think about that Sunday where we’ll have great Olympic coverage prior to our pregame show from 8 a.m. to noon, then we’ll do everything as we would always do for a Super Bowl, hopefully have a great game, I’m sure it will be. And then we’ll have that 100‑million plus audience from a Super Bowl and we’ll segue right into great live Olympic coverage back in Beijing. And to me that’s an unbelievably, really unparalleled and never before seen one‑two punch.”

Mike Tirico said, “There’s nothing bigger than Super Bowl Sunday except when you put it right in the middle of the Olympics and you sandwich the biggest day in American sports with biggest event in the sports world, the Olympic Games.”

Tirico continued, “Fourth Olympics, third primetime, second Winter and the one, the once in a generation, once-in-a-career, never-happened-before, part of this, that we will get the opportunity to be a part the Olympics and the Super Bowl on the same day. February 13th will be the most massive undertaking that any company has been involved with in terms of sports broadcasting with the biggest event in the world, the Olympics, and the biggest event in America, the Super Bowl, on the same day.

Fred Gaudelli, Executive Producer, Sunday Night Football and Super Bowl LVI said, “We will have added equipment, obviously. I can’t tell you the number of cameras right now, not because it’s so enormous, but, you know, we feel like we do the Super Bowl every Sunday night. So the cameras we add for this are really to capture situations. More goal line cameras, more cameras shooting down the sideline, cameras shooting down the end line in case there’s a question of their receiver stepped out of bounds before he caught a pass.

So it’s more to make sure there are no unanswered questions, we have all the critical looks. And that’s how we approach the game from the camera standpoint. We’ll have a brand-new graphics package and a really cool virtual package that for the first time we’ll be using a steady cam and using what they call the Infinity screen, that awesome scoreboard that hangs in SoFi. We will be using that as a graphic display tool for some of our virtual graphics.”

Dan Lovinger, President, NBCU Ad Sales and Partnerships said, “When it comes to the Super Bowl, we are virtually sold out, as we have been for quite some time. We tend to hold a few units in our back pocket until the final game matchup is announced, because as we’ve learned, some optionality is helpful for us and it’s helpful for advertising partners. So much of the decision to be part of the Super Bowl is based on creative. And when we know who is in the game, sometimes that creative creates some resonance based on the matchups. So that optionality is there, and we’ll be able to react with the last few units.” 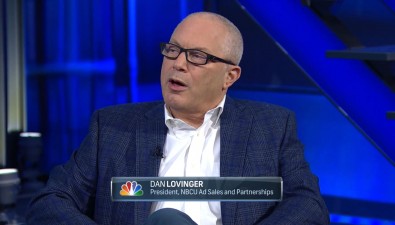 Dan Lovinger said, “We see new categories like legalized sports betting, cryptocurrency, and some of the streaming platforms come in, and then you’ve got your old standbys automotive, QSR beverage that are in strong. It all adds up to a really strong market for the Super Bowl.”

Lovinger continued, “If you’re looking to reach 100 million people in an evening, there’s really only one place you can go, and that’s the Super Bowl.” MSN recently reported “The top price for a 30-second spot has hit a record $6.5 million, according to Dan Lovinger, President of Ad Sales and Partnerships for NBCUniversal.”

Editor’s note: There are no make-goods for lost Super Bowl ads, and there’s huge money on the line in every spot. Over my TV engineering career, I’ve seen networks lose power, and I once lost our only STL to our only transmitter during a Super Bowl. Guess how fast the Master Control hotline rang. I also witnessed a fist-fight break out between an engineering supervisor and a news producer in the control room when the local team won the Super Bowl. I’ll never forget the moment that supervisor climbed over a console to smack the producer. The next day everyone was friends again.

As with recent Super Bowls, local SBE chapter volunteers will organize to register and build a database of every RF device radio and TV crews bring into the stadium through a special broadcast press entrance. Each RF device will be brightly tagged to indicate it has been registered with the frequency coordinator.

On game day, spectrum analyzer operators will monitor activity on the wireless frequencies and channels used for broadcast audio, video, and data. Most stations and networks know and appreciate how frequency coordination works and how it protects their work.