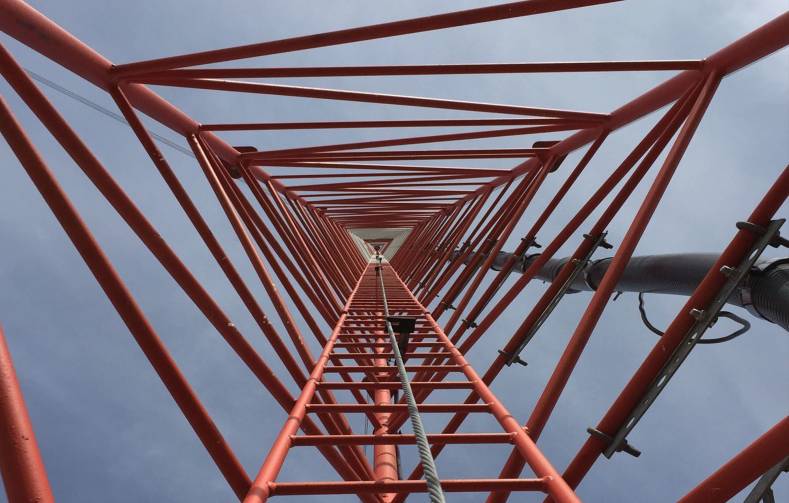 Predicting what's coming in 2022 with any certainty is about as risky as climbing this tower without a safety harness.

The new year is a time to ponder the past and muse about the future. In the past, nearly each technical device needed to produce broadcast TV cost more than building a new house, was as huge as it was heavy, and made pictures nobody would accept today. About 20 years ago, many analog TV stations were launching their DTV stations. Today, US TV stations are launching ATSC 3.0. Can you imagine what TV broadcasters will be doing in 2042?

Technology always advances, and visionaries like Elon Musk are at the forefront pushing it as far as possible. Take, for example, brain-machine interface (BMI) chips made by Musk’s company Neuralink. Musk recently promised to implant “brain chips that control your PC” in humans in 2022. His near-term goal is to use Neuralink “to restore full-body functionality to someone who has a spinal cord injury.” Who knows what’s next for Elon Musk?

While some TV broadcasters and organizations openly wonder when TV stations will broadcast holograms, BMI chip technology could leapfrog holograms and eliminate visual displays entirely. Neither is likely to occur in the coming year but stand by. In 1988, I wrote an editorial called “The Ultimate Video Recorder” that described my vision of solid-state storage of long-form digital video content years before DVRs and memory sticks were invented. My publisher said I was nuts. Today we call it Roku, the cloud, and SD memory cards.

What’s most likely to change at TV stations in 2022? Some viewers will be confused by transmitter sharing and the subchannel shuffle. Which channels are broadcast on what stations and at what resolutions? Some viewers will ignore station promos, find something else to watch instead and wonder what happened? Smart ATSC 1 OTA viewers are learning to rescan their tuners to find the new homes of some of their favorite content. ATSC 1.0 signals must remain on the air for at least 5 years. The analog to DTV simulcast transition took 10 years. ATSC 1.0 isn’t going away anytime soon.

Software in 2022 is the opposite of TV content recorded on analog videotape. Hot topics in broadcast TV technology 2022 are computer software-based tools and nearly all are acronyms. For example: IP, 4K, 5G, ATSC 3, GbE, HEVC, JPEG XS, ST 2022, ST 2110 and NDI, just to name a few. Clearly, 4K, IP and GbE are the future of TV studio and field production and ATSC 3 is the future of OTA TV transmission. Standards, T&M, and software evolution will continue to improve broadcast TV QoS and QoE.

In fact, the last NAB Shows were becoming computer shows if not software shows. About half the solutions you could see in Las Vegas Convention Center (LVCC) exhibits can be demonstrated on a computer at your station or facility. The demo may have a watermark or be unable to save settings, but you can see, share and make decisions with other station people who generally don’t visit NAB Shows.

On the other hand, there are some things you can’t experience on your local PC, such as side-by-side camera demos, lens comparisons, display comparisons, immersive audio, and dedicated user interface controls and consoles. Some things need to be felt and seen during the selection process. People can do TV production on their iPhones, but not efficiently. Efficiency is the beauty and power that professional broadcast TV production tools and solutions uniquely provide.

In 2022, I’m investigating the way my friends and I produce offshore powerboat races. We've been asked to do more races and we would prefer to hire local camera people who own their own cameras and support gear to stream, aka backhaul their cameras on the internet back to our central production studio at home. We need to replace our aging HD cameras with better pictures and cameras that connect with the internet by cellular data or Wi-Fi. It’s more economical than sending a large crew from home to an all-expenses-paid remote production site.

Typically, engineers who purchase multiple cameras want to see cameras side-by-side in a shoot-out. That’s hard to do when most local dealers carry only one or two broadcast camera lines. The same goes for professional monitors and displays. You can’t see any significant difference on your regular local computer monitor. It takes a trade show with the size and scope of a NAB Show to create an environment where a buyer can see and touch what many others will see, touch, and use over its lifetime once you’ve bought it. That experience is hard to duplicate on the internet. The future of the most exciting software-based solutions and the 2022 NAB Show will unfold through the year and The Broadcast Bridge will report on it in depth.

The electronics and technologies of 2022 are exciting but the stress of working in a TV station in 2022 appears essentially unchanged from 2021, so far. The pandemic and all the precautions and workflow changes that came with it remain in effect. Software and electronics are a bit easier to manage than the stress that comes with working at a broadcast TV station during a pandemic. Department managers have learned who is on the team. Those who aren’t on the team have pretty much ‘moved on’. That’s a shame, but it would have happened sooner or later anyway. Broadcasters never work ‘banker’s hours.’ Those who don’t get that fact don’t last.

Broadcasting is a big team backstage effort presented by very few on-stage players. If a TV anchor does or says something dumb, everyone suffers. The same happens if an intern copy writer makes a stupid assumption writing a voice-over script the anchor didn’t rehearse. It gets worse when nobody shows up for a live 6 a.m. show.

I know a local radio personality with decades of radio experience and know the owners of the radio station he starred on for many years. One recent random morning the personality didn’t show up for his regular 6 a.m. radio news/talk show. A station salesperson noticed the dead air about 0630. When he was called at home, his excuse was he just didn’t feel like coming in and he didn't. That immediately sparked a firestorm at the station. One of the owners appreciated his talent and wanted to give him a pass. The other said he had committed the ultimate unforgivable broadcast sin, must be fired, and he was.

I know and like everyone involved in this scenario, and I can see everyone’s perspective because I was once the manager who got the wee-hours phone call when someone was ill and couldn’t make it to work. Never on my watch did anyone simply not show up for their shift because they didn’t feel like coming in and not tell anyone.

What would you have done if he worked for you?