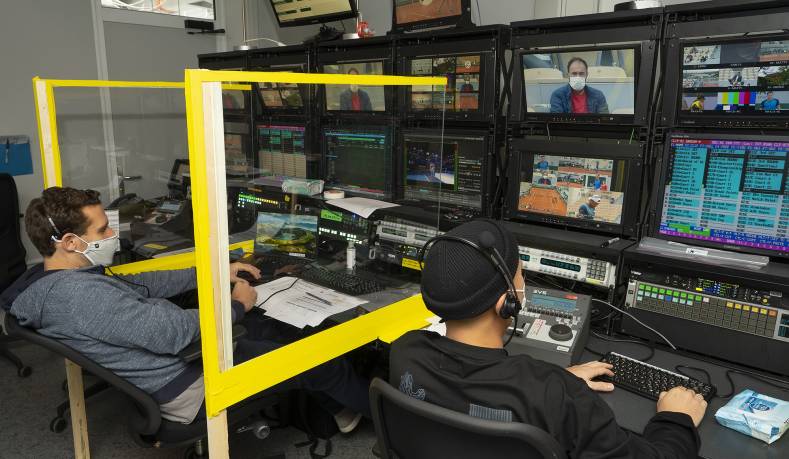 If 2020 was considered a disruptive one for the television production community, 2021 was a year where trial and error and the lessons learned became real-world REMI deployments to keep live sports and entertainment content on the air. Production studios too learned to adapt with fewer crew allowed inside and social distancing becoming the new normal.

Indeed, many production teams are now embracing a hybrid in-person and remote model, with a distributed architecture that allows crew to work from anywhere and sends only the most necessary staff on site.

Manufacturers of production equipment learned to adapt as well, delivering technology and systems that support broadcaster’s desire to keep the content pipeline flowing and new programming on the air. With both the NAB and IBC in-person trade shows cancelled and held online, disseminating product information became a virtual challenge that was met in phases. Marketing phrases like “cloud native” and “software as a service” became the only way to tell if a technology was right for specific virtualized infrastructures and production workflows.

More than ever, vendors listened to customer demands and delivered solutions that helped get the job done.

“The technology trends apparent in 2021 are the same as 2020—just as they were in 2019 – but have been accelerated by COVID,” said Larissa Görner, director of cloud product management at Grass Valley. “Adoption of remote production was born out of necessity but has opened everyone’s eyes to what is possible. IP infrastructure offers media companies an operational flexibility that they now understand is key to future-proofing their business. 2021 has also been a year of acceptance of cloud as an agent of business transformation.” 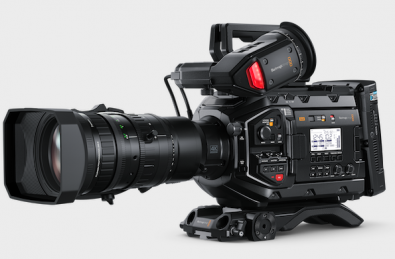 The URSA Broadcast G2 has been designed as three cameras in one.

In 2021 Blackmagic also introduced the Studio Camera 4K Plus, which has the same features as large studio cameras, but miniaturized into a single compact and portable design. With digital film camera dynamic range (13 stops) and Blackmagic Generation 5 Color Science, the cameras can handle difficult lighting conditions while producing cinematic-looking images. The sensor features an ISO up to 25,600, so customers can create amazing images even in dimly lit venues. Additional features include talkback, tally, camera control, built-in color corrector, Blackmagic RAW recording to USB disks, and built-in microphones. 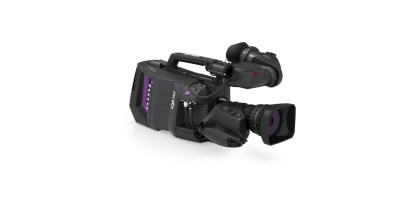 “Media companies are increasingly looking to harness IP cameras to align with the adoption of IP-based infrastructures,” said Grass Valley’s Görner. “With Native IP connectivity, the LDX 150 is a self-contained IP endpoint, meaning there is no need for a separate IP base station. It’s already built-in. This enables highly-efficient remote workflows with JPEG-XS compression capabilities, which is critical to transporting high–quality signals from sports stadiums and arenas.” 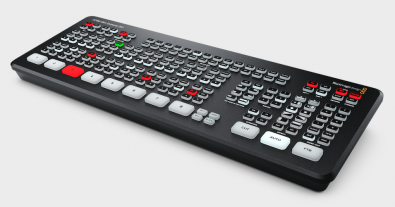 The ATEM Mini Extreme ISO is a 1 M/E switcher that can record nine separate H.264 video streams in real time.

“This year, we saw customers all around the globe with different production needs and budgets take advantage of these powerful switchers to bring their projects to the next level,” said Bob Caniglia, Director of Sales Operations, Americas.

In 2021 Grass Valley unveiled “switching as a service” to its portfolio—the Kayenne, Karrera, Korona, and KSP control surfaces—through the introduction of K Frame on AMPP (Agile Media Processing Platform). The solution is a SaaS version of the K-Frame switcher engine and it runs on AMPP. Next to the K-Frame, GV AMPP offers several switching solutions, from simple switching, or regionalization to scripted shows.

The company also launched the K-Frame XP Standard Video Production Center, a format-agnostic switcher with the largest I/O footprint in the industry (192 x 96 I/Os in IP, SDI or both).

The introduction of the A__UHD Core (Phase II) engine as the new console core for Lawo's mc² consoles was a milestone for the company this year. It delivers 1,024 channels of mc²-quality audio processing in just 1RU, while dramatically cutting power consumption — performance that previously required 5x the power and 10x the rack space. A “pooling” license allows one A__UHD Core to divide this massive DSP power between multiple mixing surfaces so that a single A__UHD Core can power several smaller consoles instead of one very large console: for example, four consoles with 256 DSP channels each.

A__UHD Core is a native IP device, designed to work within IP networks and manage networked devices. As such, it is based fully on open standards such as ST2110-30/-31, AES67, RAVENNA, Ember+ and NMOS. And it’s designed for both 48 kHz and 96 kHz operation. Beside the sustainability aspect, it marks another step towards making remote production capability available on a much larger scale.

The A__UHD Core is a native IP device, designed to work within IP networks and manage networked devices and serves as the next-generation audio engine for Lawo’s mc² audio production consoles.

Pooled resources based on software-defined processing devices such as Lawo’s V__matrix for video-related processing, and A__UHD Core for audio-related processing, have made it possible to build centralized, private cloud-type live processing environments to which various distributed production workflows can be mapped in a very efficient way, utilizing a resource, schedule and network-aware control system like Lawo’s VSM.

As the broadcast market continues to converge on IP networks, other companies like Calrec Audio saw a significant increase in the number of IP-infrastructures that it supported this year. This made the continued development of stream manager software like the Calrec Connect app more valuable than ever.

“Stream managers manage every audio stream and device on an AoIP network and are agnostic of device, so they manage the entire broadcast IP workflow, including 3rd party devices,” said Dave Letson, VP of Sales, at Calrec Audio. “These devices can be connections to and from IP console cores, I/O units, or other 3rd party AoIP equipment.

In addition, supporting protocols like NMOS IS04 and IS05, which cover device discovery and device management respectively, means that stream managers can manage the entire IP flow with a single stream management system. Software like Calrec Connect also adds audio functionality such as GPIO and mic input levels and administers software updates to all Calrec I/O boxes.

Audio Was Mixed From Anywhere In the World

Along with its existing portfolio of audio mixing consoles, Calrec continued to offer its RP1 remote production unit in 2021, which provides access to any of its consoles from anywhere in the world without ever leaving the studio. Employing a remotely controlled processing engine like RP1 means dedicated control rooms can be used to mix across multiple remote venues. 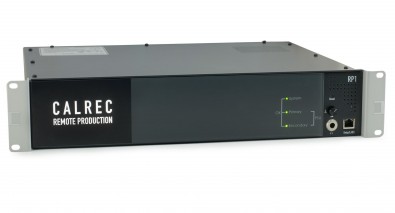 The Calrec RP1 remote production unit provides access to any of its consoles from anywhere in the world without ever leaving the studio.

“2021 has been another unusual year, and so it is fitting that the biggest innovation in broadcast audio consoles is just as unusual, as it doesn’t actually have anything to do with any technology advances in the console,” said Calrec’s Letson. “In fact, the biggest innovation has been the way broadcasters have adapted existing console technology to meet their changing needs.”

He said that in 2021 the live broadcast landscape changed completely with the acceptance of remote production and the untethering of broadcast practices from established workflows. Many of its customers were already starting to work with Remote Operation Centers (ROCs) during 2020, but in 2021 this way of working has become “normalized.”

Signals Were Monitored In Real Time

Among the biggest innovations in multiviewing and monitoring systems in 2021 is TAG Video Systems' Realtime Media Platform, a multi-level, open-source software-defined environment that allows the user to monitor, aggregate, manage and employ data-driven viewer analytics to provide users with the insight required to build performant linear media systems via the cloud.

The foundation of the Realtime Media Platform is TAG’s MCM (Multi-Channel Monitoring), a software-based IP end-to-end monitoring, deep probing, logging, and real time visualization solution that monitors every type of signal from live production through OTT delivery and supports hundreds of sources including all the latest formats and transport methods. 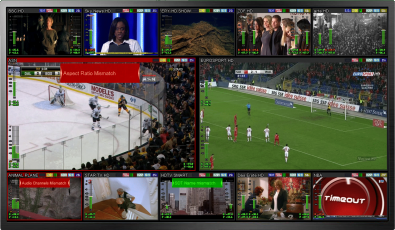 TAG’s MCM-9000 software only, IP-based UHD Multiviewer and Monitoring system is optimized to support the SMPTE ST-2022-6/2110 standard in HD and 4K/UHD sources at the input.

“Making accurate data-driven information accessible to our customers provides them with the open-source tools they need to extract accurate information and use it to achieve better performance and truly improve both Quality of Service and Quality of Experience for their customers,” said Kevin Joyce, Zer0 Friction Officer at TAG Video Systems.

TAG’s products have been “cloud-native” since 2008, but in 2021 the company added significant support for cloud enabling remote production tools like JPEG XS, NDI 5, SRT, and continued to help customers cut a clear and simplified path toward an IP-based workflow in the cloud as an AWS Select Technology Partner with support for AWS protocols including, AWS CDI and Amazon EC2 M6i instances.

Many Lessons Learned, More To Come

Broadcasters have spent the last two years re-assessing long-established broadcast audio workflows, and both remote working and remote production are now everyday events. With the pandemic, there really has been no other way to cover many live events than remotely. For example, live coverage of the Tokyo Olympics (which was rescheduled from 2020) was mixed on Calrec equipment in a number of different ways—with some physical consoles on-site and more on-site remote production cores that allowed people to mix live-to-air in different countries all over the world.

Manufacturers—like Lawo, with its software-defined platforms for video processing and multiviewing, radio applications, and digital audio—are moving toward providing all the ingredients of a private cloud, enabling decentralized, multi-campus and flexible remote operation.

“We can say that 2020 was a year of adjustment and figuring out ways to keep productions moving along while adapting to remote workflows,” said Blackmagic’s Caniglia. “Today, the story is different, as many of our customers are embracing a hybrid in-person and remote model.

“If something has brought us pride in 2021, it’s that we were able to deliver tools that our customers could incorporate to continue bringing their projects to life, no matter budget, location or accessibility,” he said. “The stories our customers have shared with us this year on how they’ve been able to successfully work on a project remotely with their colleagues has been truly inspiring and, while some are returning to an in-person workplace, remote production is not going anywhere. For in-person projects, safety is top of mind, and virtual production has become key to these efforts.”