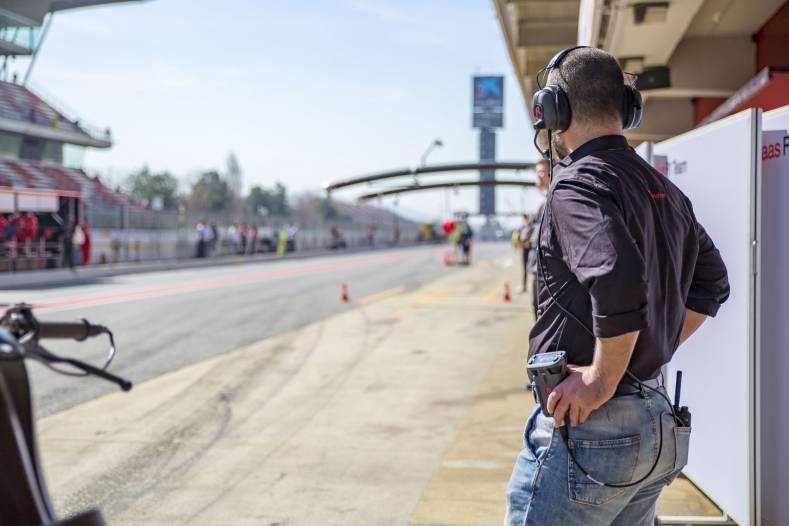 Formula 1 Racing has used Riedel Comms systems for nearly three decades to keep its crews and drivers on the same page during a race.

In the action-packed and frenetic world of motorsports operations, crew communications at the track can be as important to success as the actual performance of the car itself. Monitoring telemetry from the cars and managing and distributing hundreds of audio channels has also become vital. It’s hard work configuring the required technology infrastructures on a weekly basis during the 11-month Formula 1 (F1) racing season, but well worth it.

For the dedicated motorsports team at Riedel Communications, moving to IP operations for this past F1 season has made a huge difference in setup and configuration at the 22 race events around the world it has helped support for 20 cars and ten constructor teams at each race.

In fact, Riedel has been delivering F1 trackside communications for over 28 years and has overseen a consistent evolution of comms technology that has kept all involved on the same page during a race. They’ve done it by constantly simplifying workflows where possible and, since 2018, deploying secure (and temporary) ST 2110 IP networks at each venue.

“While IP is what everyone is talking about these days, we are very careful not to change things too quickly,” said Dario Rossi, Head of Formula 1 team and Vice President of Global Events, Sales at Riedel. He joined Riedel in 2012 after a career in motorsports. “IT people tend to want to change too quickly. In motor sports, system reliability is the most important thing, whether that’s IP or traditional radios. We like to move at our own pace.”

Yet IP is clearly the direction Riedel has decided to go. Using IP switches for distributing AES67-compliant signals over a PTP network (with a latency of around 2 milliseconds), race team crews and other personnel can clearly and reliably communicate with each other and discuss strategy amidst the roar of car engines. 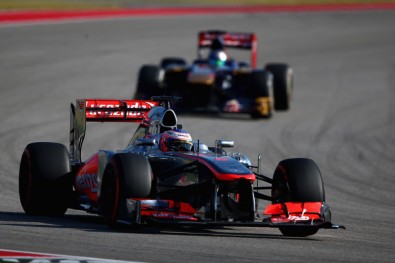 At each race site over 6km (3.7 miles) of fiber is installed to connect each garage as well as remote facilities.

And like the on-site IP network that is set up and torn down after each race—Riedel’s crews installed over 6km (3.7 miles) of fiber to each garage at every race location a week ahead of an event—only to move on to the next venue, the Artist node has been designed with redundancy at its core. By supporting multiple redundancy schemes, including manual N+1, NIC, and SMPTE 2022-7, it can provide the robustness and reliability required during an F1 race.

All control logic and data links within the frame are redundant, and additional security is provided by two load-sharing PSUs and a fan module with redundant fan units.

The Artist system has been paired with a Bolero wireless intercom system with built-in voice codec (capable of supporting up to 250 belt packs and 100 antennas in a single deployment), and a Riedel RSP-1216HL SmartPanel, a 1RU unit used for managing and controlling real-time video, audio, data, and communications. It supports AES3 and SMPTE 2110-30 (AES67) connections together with GPIO, analog, or AES67 4-Wire connectivity.

The team also leveraged a Multiprotocol Label Switching (MPLS) System, which is a full service based at the company’s Frankfurt, Germany location Riedel Networks. MPLS routes data from one node to the next based on short path “labels,” rather than long complex network addresses. It speeds the process for all involved.

POPs Around The World

Leveraging Riedel’s 40 POPs around the world helps establish the backbone over which all audio and video signals are sent from the track to Frankfurt for network monitoring and maintenance. The backbone is made up of IP switches that facilitate complete control of all of the audio and video transport along the way between POPs. If a problem arises at a track, the Frankfurt team can make adjustments on the fly remotely. 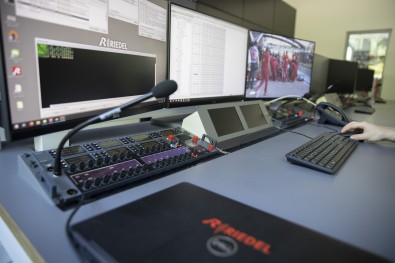 The company’s Wuppertal, Germany headquarters also serves as a centralized hub for remote F1 operations. In Wuppertal, the race telemetry and comms traffic is monitored and processed and then redistributed to the race teams at the track in real time. So, race teams send the telemetry coming from the cars to an on-site production truck, then on to the closest Riedel POP. To keep the race data secure, the team uses three paths back to Germany, for redundancy.

Latency is another issue that must be looked after and carefully controlled. For each race they experience about 5 milliseconds, depending upon the distance to travel, which is acceptable to all involved. From Australia—where they usually help produce the Australian Grand Prix in November (but which was cancelled in 2020 and 21) — the fastest route, using Riedel’s POPs in Tokyo, Frankfurt, Hong Kong, and London (depending upon availability) is 280 milliseconds Up/Down link. If you go through Los Angeles, it’s about 360 ms round trip.

For example, for the 2021 F1 season’s final race, the Abu Dhabi Grand Prix on December 10-12, signals were sent from Abu Dhabi (United Arab Emirates) to Frankfurt and then from Frankfurt to Wuppertal. In total, this took about 160 ms for signals to make the roundtrip.

The MPLS is also used to maintain QoS for the entire comms infrastructure. A cloud-based SDVN is also used to move signals around the world. Rossi said the setup is more sophisticated than a typical public network. In Abu Dhabi 150 video signals and all of the telemetry from the various race teams had to be managed securely throughout the entire race week. This data is used for race control. Riedel also maintains a PTZ camera CCTV system on pit row at each track to monitor the race teams for tampering and other activities—in compliance with the Federation Internationale De L’Automobile (FIA), which governs Formula 1.

On-Site Command Center In A Box

A portable “Command Center” set up on site that consists of a single flyaway kit system is delivered before the race and installed close to the pit garages. It’s a fully redundant unit with its own generator and contains routers with servers (more than 60 terabyte of storage) loaded with Riedel software, which pulls in all the information for FIA race control. Once it leaves the track just the fiber and the power cables are unplugged, making tear-down after a race fast and easy.

A second crew connects the fiber to the data center and configures the network. After the race, a third crew de-rigs the fiber, tests, and stores it for next year’s race season.

All data is sent through the Command Center to FIA, F1 and the off-site race team facilities, and is stored on the Command Center as backup. Critical data is always exported and stored in Wuppertal and Geneva. For each race they save data from: telemetry, cameras, audio, and system backups. The amount of storage used during a single race weekend is roughly 25 terabytes. 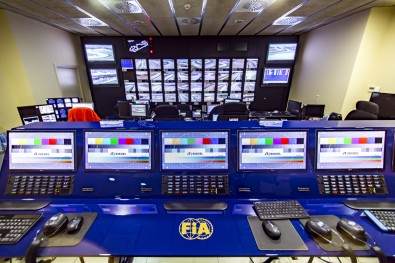 To keep the race data secure, the team uses three paths back to Germany, for redundancy.

Celebrating The Move To IP

There’s no doubt that moving to IP has helped with crew and equipment logistics (and the restrictions imposed by the pandemic), it has also brought with it a learning curve that has seen the Riedel team get more and more familiar with each race. For each race there is some customization to their standard workflow, due to each location’s unique environment.

“In some ways IP has made our job easier to set up and configure,” Rossi said. “When you outline a system, everyone on the network has an IP address, so we know they are connected and everything is working. However, diagnosing problems on the network quickly is challenging in the IP world. We are still learning things, but we see the possibilities of how it can make things better, like remote production.”

It’s clear that the F1 workflow gets better with each race, including crew members working at a safe distance from each other, better handling of race data and real-time connections to ensure “listenability” on the wireless intercom network.

“The fact that people can work from home is beneficial for everyone involved,” said Rossi. “We measure our performance in terms of [comms] reliability and quality.”

By that measure and many other technical innovations, Riedel’s IP operations, the complex work of its staff and its relationship with F1 racing is now firmly in the winner’s circle.