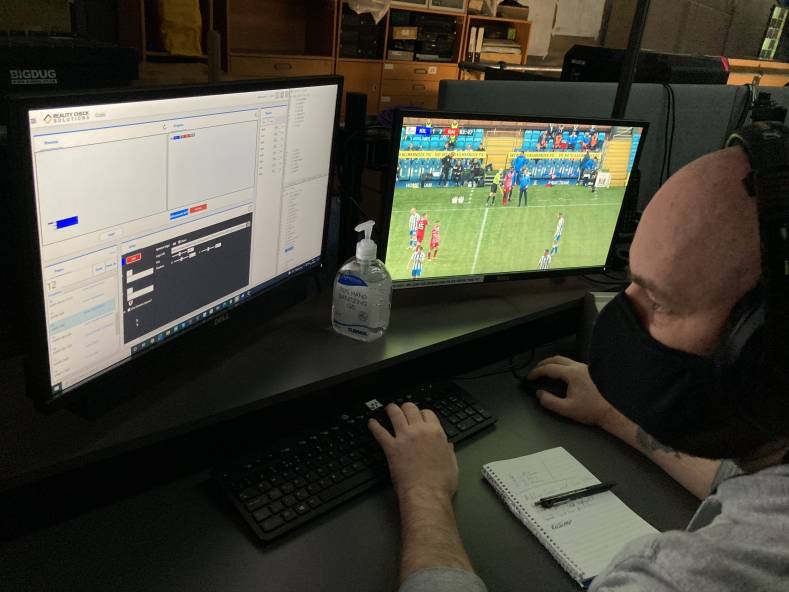 Cloud-native production gear like Singular.live came into their own during the pandemic.

An obvious place to look is how COVID-19 has reshaped the workflows of productions across the industry. Remote working and geographically dispersed teams linked online and via cloud are now embedded.

Microsoft thinks this has accelerated to the point that the M&E industry is probably five years ahead of where it thought it would be.

“What you see is companies looking to reimagine their workflows because the lines between media types are disappearing,” Simon Crownshaw, CTO for Media & Entertainment at Microsoft, said.  “These transformations are ramping up at an amazing rate.”

With traditional working practices upended, rising costs and technological advances, startup post production firms are eschewing physical facilities in favour of a cloud-first approach. If you are going to launch a postproduction business today you would at the very least offer the flexibility for clients and staff to work from home.

Start-up post houses in 2021 included Assembly, with facilities in New York City (and a Los Angeles facility opening in 2022) with a cloud backbone to offer clients a choice between in-person or remote creative sessions.

Others include, Racoon, launched in February by the former management team of one of the largest and most successful bricks and mortar facilities, London-headquartered The Farm. Racoon is an online platform providing all the offline, finishing and mastering services you would expect from a traditional facility, but in a potentially more efficient, agile and sustainable manner.

“It is very difficult to change your business model if you are having to fight legacy real estate and technology,” said founder and CEO David Klafkowski “If I had 50 rooms and I was looking to re-engineer my editorial backbone I would actually engage the services of a company like Racoon because it would be more efficient than buying in equipment.”

He is careful to avoid calling Racoon a facility, even though it does have premises on Frith Street. However, the only hardware on premise is monitoring. Everything else is in a data centre connected to by dark fibre.

“You can’t start a business and be entirely virtualised. I knew we would have to have some real estate to bridge the gap. The industry can be slow and reluctant to change but also there is a need for people to get together and discuss issues face to face. It just doesn’t need to happen anywhere near as much as it used to.”

Also new is BeloFX a cloud-first facility founded in Canada and the UK by a group of former senior executives at VFX powerhouse DNEG. “We are remote and cloud first—everything we design is with that in mind,” explains Graham Jack, CTO. “That doesn’t mean we won’t have our own infrastructure or premises but the starting point is to make it work in a decentralised way and open up opportunities for remote collaboration. It would have been challenging to do this five years ago but the technology has now reached a tipping point.”

BeloFX’s set-up mirrors the functions of a traditional facility with virtual workstations running in the cloud connected to artists machines via Teracidi PCoIP. This is the standard decentralised tech workflow adopted by dozens of posthouses to remain in business during the last 18 months.

Launching as a decentralised facility is also an opportunity to recast the conventions around employment where talent doesn’t need to be living around or commuting into central London.

“Artists have already restructured their lives and reorganised how they live their day around child care and how they interact with families,” says BeloFX COO Ellen Walder. “People have embraced flexible working. We definitely want to embrace new technology that makes it possible to build a diverse and inclusive company, one that’s merit based. We believe this breaks down the barriers to employment and progression that there has been in some companies in the past. We are passionate that this is the model of the future.”

Many editors working in drama and entertainment have worked from home and preferred it. A number of those have now relocated from cities. That’s creating a dynamic where in a new hybrid world editors will want to meet and work on a production initially to get the editorial shape together but the bulk of editorial itself can be remote using tools like Sohonet ClearView Flex for an over the shoulder session.

Remote live production has become all the rage in the past 18 months for reasons that should be obvious. This doesn’t necessarily mean that every workflow has shifted to the cloud, but that is the logical next step. Even BT Sport, one of the world’s premier sports production teams, is doing R&D on lifting its current remote collaborative workflows into the cloud.

The cost and efficiency benefits of distributed workflows were long touted as reasons to get out of the facility. The last period has proven that the normal operation of live production – for something as previously wedded to the OB as the vision mixing – can be produced with negligible impact on quality by staff working in a central office or from home.

Rather than having to dedicate that team to one event, a cloud infrastructure with a distributed workflow permits multiple people working on multiple events happening one after another.

Another benefit to distributed workflows and cloud production is the ability to copy-and-paste complete workflows once you’ve created a template that works for you.

You can take the workflow you’ve used for one show and re-create it for another event using another data centre. It allows you to spin up multiple productions and multiple events without having to worry about starting over every single time.

Final distribution is another benefit of cloud production. If you’re going to streaming destinations, whether overseas or domestic, final distribution is definitely easier in the cloud. You’re already on the internet. You can’t get any closer to it.

There are drawbacks too.  Getting familiar with a production workflow based on GUI access, as well as figuring out what your inputs are and how they get there, along with outputs and how to get them out, can be challenging.

This speaks to the issue of cultural upheaval as staff are retrained in new technologies. It almost goes without saying that the pandemic accelerated the introduction of automated and remote production workflows and web-based technologies, but a lingering side effect has been to exacerbate an industry-wide skills gap.

Education is needed to bring previously different cultures together as one team. Broadcast engineers need to get their heads around programming and OB crew need to feel comfortable with virtual control panels that aren’t physically attached to the hardware driving it.

IT specialists on the network side need to understand core broadcast skills such as why PTP is so vital or why there is such a concern about accurate orchestration, the impact of latency and the implication of lost packets.

To an extent the acceleration of adoption and the advance in sophistication of remote web-based production and distribution tools have levelled the playing field between what was nominally a tier 1 and a tier 4 sports production value.

Fans of course don’t know or care about how their sport gets to them – they expect top quality whether that’s broadcast or viewed OTT.

That said, the challenge will be how to manage new remote production workflows alongside the traditional OB. Major live events like next year’s FA Cup Final and the World Cup Finals will use remote production but still maintain significant OB facilities on site.

Perhaps the main leveller for change in this regard will come from the clamour to get serious on sustainability.

Getting Serious On Sustainability

But as we emerge from the pandemic it is on all of us to substantiate these claims. Media organizations must turn their attention to adjusting their business models further and quicker to tackling the threat of climate change.

It’s going to be next to impossible to claim to be carbon negative without transforming workflows on a greater scale than ever before. “Some of the technologies required won’t even have been invented yet, and it’s not something that M&E in general has begun engaging with on a large scale,” says Microsoft’s Crownshaw. “Having spent time with leaders across the industry, I think it’s starting to become a critical issue.”

The UN’s COP26 summit capped a year which drove climate change to the top of news agendas and awareness of its urgency means companies can no longer pay lip service to sustainability and get away with it.

The leading broadcasters are becoming very concerned about doing all they can to demonstrate their carbon-reducing credentials. This includes the technology and operational capability of their managed service providers. Every organization must seek to eliminate or reduce the environmental costs of doing business. Decarbonizing the supply chain is a sensible place to start.